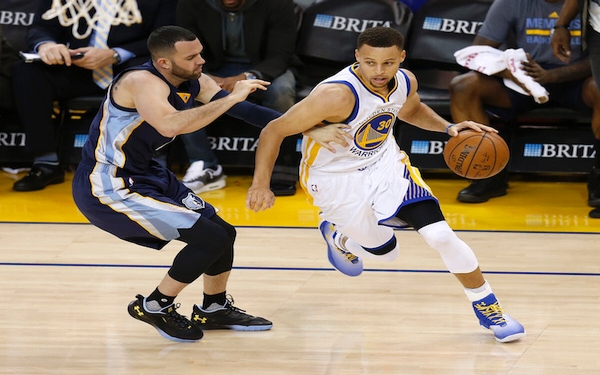 The Golden State Warriors' Stephen Curry (30) works off the dribble against the Memphis Grizzlies' Jordan Farmar in the third quarter at Oracle Arena in Oakland.

OAKLAND, Calif. — History well in hand, Stephen Curry sat on the bench throughout the entire fourth quarter and surveyed the scene until the final buzzer.

There was nothing but joy all around Oracle Arena.

Confetti fell as the Golden State Warriors became living legends Wednesday, finishing the regular season with the best record in NBA history at 73-9.

They broke the record for single-season wins by routing the Memphis Grizzlies 125-104. Draymond Green — the player who openly talked about wanting it the most — came away with the game ball.

“Now let’s go get this championship,” Green told the crowd after the game.

Coach Steve Kerr played on the 1995-96 Chicago Bulls team that went 72-10 with a record many believed to be unbreakable. He gave a nod to his old team, wearing Scottie Pippen socks during the game. Kerr’s new team is something special, too.

“The team held itself to a high standard throughout the season, playing with purpose every night and captivating fans around the world with its free-flowing style, spectacular shooting and flair for the dramatic,” NBA Commissioner Adam Silver said in a statement congratulating the Warriors.

With Curry gunning on a memorable night, records started falling.

The reigning MVP dazzled with a 46-performance over three quarters as he made 10 3-pointers to reach a milestone number of his own and surpass the 400 mark this season.

Curry finished with a single-season record 402 3-pointers, shattering his own previous record of 286, as he hoisted a career-high 19 attempts.

The Warriors finished their joyride of a regular season with a 39-2 record at home, and it’s at Oracle where they will have home-court advantage throughout the playoffs, which begin Saturday.

“At the end of the day, the support night in and night out you bring to this arena is incredible,” Green told the fans after the game. “Winning 39 games at home is incredible.”

The Warriors will face the eighth-seeded Houston Rockets in the first round of the Western Conference playoffs.

Curry entered the night looking to reach 400 3-pointers this season. By the end of the first quarter, he had already put on a laser show and made six of them.

Three of Curry’s 3-pointers came in a flurry on consecutive possessions that took less than a minute. The onslaught began with Curry nailing a 31-footer, and after he confirmed the hot hand with two more, the Warriors led 27-16.

Curry’s sixth 3-pointer pushed the lead to 13. After Curry pulled up again and missed from long distance, Festus Ezeli scored on a tip-in and emphatically blocked a shot on the other end as the Warriors went into the second leading 37-23.

Then, it was Klay Thompson’s turn. The other Splash Brother knocked down three straight 3-point attempts to give the Warriors a 61-41 lead.

Curry’s seventh 3-pointer came off a wide-open look and gave the Warriors a 22-point lead. With 399 3-pointers, Curry had two looks on the final possession of the half that missed as the Warriors went into halftime leading 70-50.

Curry made good on a promise that he would start chucking 3-point attempts if he got to 399. And he didn’t wait long to hit No. 400.

Forty-three seconds into the third, Curry fired on the Warriors’ first possession and reached that round number he coveted.

The shot went in, and he raised both arms in the air in celebration.

No. 401 would soon follow, and when Curry came to the bench during the next timeout, he received hugs and handshakes and acknowledged the crowd.

Curry had a brief scare in the quarter when he was down for a moment after colliding with the Grizzlies’ Zach Randolph going for a loose ball.

But in the fourth, Curry finally got the rest that the coaches had wanted him to get headed into the postseason.

The next goal is for the defending champions to repeat.