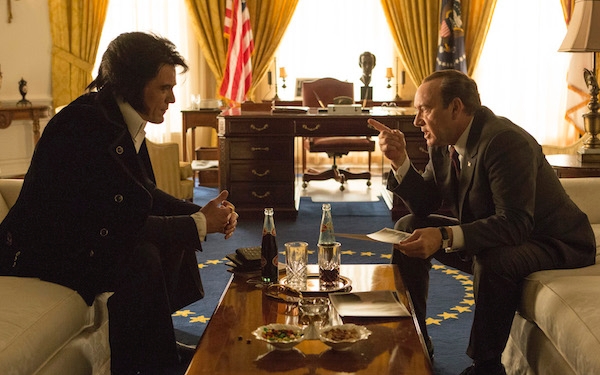 What happens when Elvis Presley walks into The Oval Office to ask President Nixon to make him an undercover narcotics officer? What? No, I wasn’t looking for a punch line. I was just prompting the plot of Liza Johnson’s comedy Elvis & Nixon. You didn’t know that actually happened? Well, now you do, but unfortunately that’s probably the most enticing thing about her finished product, which lacks momentum, urgency, and ultimately, necessity.

Some of you may be familiar with the photo that sparked this question of what exactly happened when these two huge personalities emerged from the most important room in the world. The image of Elvis and Nixon shaking hands amicably in The Oval Office looking as chummy as you could expect from such wildly different characters is actually the most requested image in historys. To Joey and Hanala Sagal, the two writers who began fleshing out this story, that simple picture begged numerous questions about what the hell was going on in that moment. Why would a president who was so infamously out of touch with the entertainment and youth cultures meet with the man who was famously famous? That’s what Johnson (Return) and her team of writers wanted to find out.

So, this story—this tale, more like—is mostly told from the perspective of one of The King’s few close confidants, Jerry Schilling (Alex Pettyfer, I Am Number Four), who is lured by Elvis (Michael Shannon, Revolutionary Road) to help with an important mission. While Schilling has tried to steer from the Memphis Mafia lifestyle, which undoubtedly gets messy, Elvis quickly proves the deal nonnegotiable with an equal dose of charm and menace. And what is the deal exactly? Well, seeing as Elvis can’t stand the direction the country is taking at this point in 1970, with the protests, sex, and drugs running rampant in the street, he feels he needs to take matters into his own hands… by becoming an “agent-at-large.” While most of his colleagues didn’t believe this title even existed, Elvis persisted that it was an honor that could be bestowed on him by none other than President Nixon (Kevin Spacey, “House of Cards”). And so, they try to set up a meeting with the big man, which, naturally, is a mission in its own right.

While there isn’t actually too much information on the exact historical occurrences that led to and resulted from this meeting, the writing team, who was later joined by actor Cary Elwes (The Princess Bride), used what little intel they had to infer and fantasize about what possibly could have gone down inside that most secret of rooms. This is probably the first punch to the film’s gut, because, while the intention was good and it is fun to wonder what could have transpired between such egos, its still just a guessing game that pushes the few bits of solid comedy to an absurdist level. This is coming from a person who loves a little bit of silliness sprinkled over a good narrative, but this particular idea of implication makes the project more trivial rather than alluring.

This isn’t to say that there aren’t promising qualities in Johnson’s romp. Seeing as Spacey has gallivanted around the political scene, both on fictional and nonfictional terms, he is unsurprisingly impressive as the grumpy curmudgeon of a president that was Nixon. Not only are his mannerisms keenly precise, but he also provides an almost childlike giddiness in the moments of connection with Elvis. These are the instances the entire film builds up to, and while they are damn satisfying, I wonder if I could’ve seen a short film bringing much more punch instead of the unnecessary flare.

That brings us to Shannon as Mr. Presley. It’s pretty tough to criticize an actor—especially one as revered as Shannon—for playing a man who has been endlessly caricaturized by popular culture since his heyday. Impersonators have become irrevocably entangled in Elvis’ own identity, to the point that when Shannon steps on screen with the typical sunglasses, wing-tipped jacket, and full blocked sideburns, its difficult to discern acting from impersonating and vice versa. Yes, Shannon downplays those eye-roll-worthy quirks that saturate Vegas, yet still, the cartoon quality of the legend is unshakeable, which is more depressing for Elvis himself than Johnson’s finished product.

Sure, there will be diehard fans of Elvis—and maybe even Nixon?—who will find plenty of enticing backstory in Elvis & Nixon to suit their fancy, and there is definitely a solid cast to ramp the comedic factor up, but in the end, there lacks a sincerity that is surprisingly craved for as the credits roll. Not to worry, the mystery behind the picture will live on despite what we don’t take from this account, as well as the legacy of the two men in it.