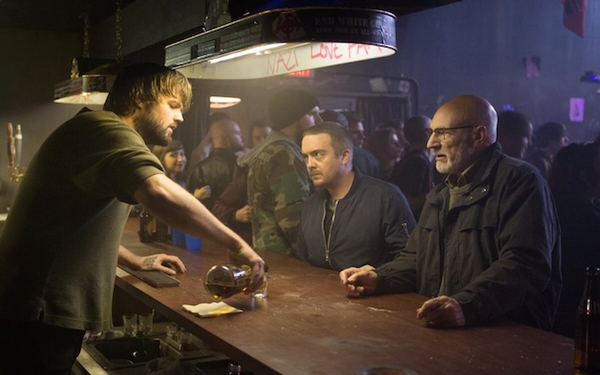 When most filmmakers look back on their youth, they create stories tinged with a gauzy sense of soft-focus nostalgia. For the new film “Green Room,” writer-director Jeremy Saulnier opted to draw from his younger days in the hard-core punk rock scene and create an intense action thriller, a rough-and-tumble siege film that is more in the spirit of punk rock than it is about punk rock itself. Which is, of course, a super punk-rock thing to do.

“My mission is to have my cake and eat it too,” Saulnier said recently of his desire to make a film that served as both a tribute to his punk rock youth and functioned as a tense, engaging art-house genre movie.

“What I wanted to do was use the punk and hard-core scene as a backdrop, to set the stage,” he said, “and then go back to the other joy of my youth, which was hard-core genre cinema, something really physical and tactile. It was about blending those two passions.”

As the movie opens, hard-core Virginia-based band the Ain’t Rights are scraping by on tour in the Pacific Northwest, not above siphoning gas from other cars to keep their van going. When a last-minute gig comes up, they reluctantly take it, even though it is at a remote roadhouse known to be frequented by racist skinheads. After a tense show, they stumble upon a dead body in their dressing room. As things escalate quickly, they find themselves locked in that room and battling for a way out.

“Green Room” stars Anton Yelchin, Alia Shawkat, Joe Cole and Callum Turner as the band, with Imogen Poots as a skinhead girl trapped alongside them. Mark Webber and Macon Blair play punks of varying loyalties and sympathies with a menacing Patrick Stewart as the owner of the club and leader of the brutal skinhead faction.

Saulnier, originally from Virginia but a longtime resident of Brooklyn, N.Y., was on the phone recently from Portland, Ore., when he was there for the local premiere of the movie. Saulnier’s first feature, the horror-comedy “Murder Party,” won the audience award when it premiered at the 2007 Slamdance Film Festival. It was his next feature, 2013’s revenge thriller “Blue Ruin,” that would really launch his career, winning a prize when it premiered in the Directors’ Fortnight at Cannes and being nominated for a Spirit Award.

“Blue Ruin” was also a film to benefit from new hybrid forms of movie releases, finding an audience through digital platforms that far exceeded its theatrical grosses. Its popularity created a high level of expectation for “Green Room,” which also premiered in the Directors’ Fortnight before going on to play numerous other festivals, including Toronto, Fantastic Fest and Sundance.

The momentum created by “Blue Ruin” led directly to “Green Room” in that Saulnier was suddenly fielding offers for bigger budgeted studio projects and wanted to make one last film quickly and, in his words, “unfiltered.”

The span from beginning the script to the end of filming, in the fall of 2014, was essentially one year. Saulnier wanted the script to maintain the energy of a first draft, so while he knew the setting, the siege and the ending when he began writing, his main goal was to surprise himself while filling in the gaps.

Once the band is trapped in the dressing room, the film develops an escalating tension between their need to get out and the invention and imagination of the obstacles and solutions Saulnier creates for them.

For Yelchin, part of what makes the movie so powerful is how ultimately senseless the violent maelstrom really is that the Ain’t Rights find themselves caught in.

“There has to be something bigger than they walked into this … and now they’re stuck,” said Yelchin. “And there really isn’t. There is no why. They are in the wrong place at the wrong time, and they are dealing with someone who felt the only way to solve a problem was a very pragmatic approach. And I find that heartbreaking.”

That pragmatic approach is the method of Stewart’s character, Darcy, a seemingly legitimate small-town businessman with a series of secrets he needs to keep compartmentalized. Saulnier noted the character’s “brutal indifference,” while proudly adding that by having Stewart turn in “his quietest performance of all time on stage or screen,” the actor has also never been more menacing.

With Stewart well known for his stalwart, upstanding heroic characters in “Star Trek: The Next Generation” and the “X-Men” series, many have remarked on his villainous turn in “Green Room” as a real surprise. So, is Stewart surprised by the reactions?

“Actually, I’m irritated,” he said with a sly smile while sitting with Yelchin for a recent interview in Los Angeles. “I’ve always considered myself to be an actor of diversity. My first acting job was in a repertory company in the U.K., and we did a new play every second Monday.

“Six years ago I was in a really successful and terrifying production of ‘Macbeth.’ So it’s not strange to me,” he said. “My blessing and my curse is that I’ve been gifted with two franchises in which I play upright, decent, intelligent, compassionate human beings. And that’s who people think I am. Ain’t true.”

With the quiet power of Stewart’s performance at its center, “Green Room” can leave audiences feeling drained, emotionally and energy-wise, its barreling intensity just wearing people out. Without revealing who, it’s no spoiler to say that at least someone is still standing at the end, and that Saulnier hopes there is some glimmer of light on the other side.

“I definitely designed it as an exercise in tension building,” said Saulnier, “trying to reach the involuntary nervous system. If you can exhaust people, make them feel imperiled, then you can also make them feel exhilarated when they survive. It’s meant to target the heart and the guts in a way that you feel like you are not in control.”

“It’s a pretty visceral experience,” added Yelchin. “You can intellectualize it if you want. Jeremy’s cinema is open to that. But on a very basic level, it’s just gnarly.”