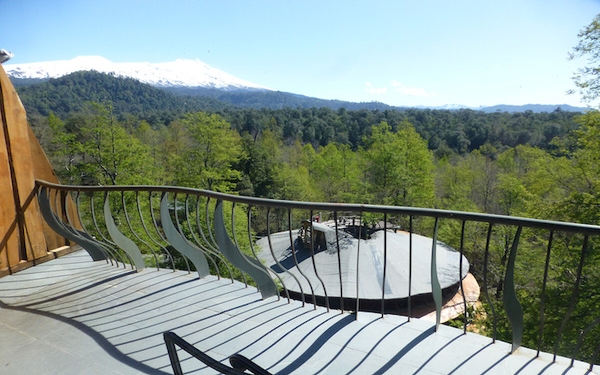 (Credit: In the canopy at the Nothofagus Hotel, Choshuenco Volcano at rear, at the Huilo Huilo Resort.)

NELTUME, Chile — My first clue that Huilo Huilo, in central Chile, might not be your typical wilderness park was when I unfolded the tourist map and spotted the word “canopy.”

An English word. Not one you’d expect to find in a Spanish dictionary. Nor a name you’d be likely to see on a map of a rare temperate rainforest, a 250,000-acre preserve in the foothills of the Andes Mountains.

I looked again and found a second “canopy,” and a third, as if the map-maker tasked with illustrating Huilo Huilo’s “green mansions” decided that if one canopy was good, three must be a charm. So I poured another cup of tea and took a closer look.

Huilo Huilo, a UNESCO-designated biosphere, is a park like Yellowstone or Glacier national parks, a protected biological reserve. But it’s also a tourist resort, a for-profit business. Here, on the border between Patagonia and the Lakes District, where the Mapuche tribe once shared the trees with the forest fairies — living spirits of ferns and flowers, frogs and fungi — eco-tourism is booming.

Here is the Reino Fungi Lodge, the “Mushroom Queen,” a fat round shape resting on a cement stalk. There is the multi-sided Nothofagus Hotel & Spa, also known as the Baobob Hotel, with a tree growing in the dining room, guest room doors opening onto a spiraling corridor and an activities desk offering an infinite array of outdoor adventures.

The Montana Magica hotel — the Magic Mountain — connected to the other hotels by a covered boardwalk, was the owner’s first experiment in rustic design; the result is a moss-covered, cone-shaped, tree-like building with inset windows and a brook spilling off the top. Made almost entirely of custom-hewn local wood, its giant logs, thick beams and untrimmed board paneling are a one-off work of art.

On one corner of the map, a 125-foot waterfall rushes over a fractured rock; in another corner, a pair of horseback riders canter across a meadow. Forest trails, the Rio Fuy and Lake Pirehueico promote hiking, fishing, kayaking, easy and risky whitewater rafting, birding and horseback riding.

At the map’s upper edge, an ice climber scales 7,946-foot Mocho Choshuenco’s glacier while a skier schusses down this active volcano’s snowy slopes. Miniature deer — the endangered Andean “huemul” — and a puma, Darwin frog and a clutch of long-necked guanaco — first cousins to the llama — peek out from between the trees.

On the volcano’s lower forests, “Canopy” zip lines mark the spot where — as I was soon to discover — five dizzyingly long cables straddle deep dark gorges.

“El canopy, you know, it means rides in the air,” said our guide Juan Valencia, on my second day of vacation, leading me and a handful of other visitors to the zip line’s check-in hut.

Buckling us into our harnesses, he led the way up a trail hacked into the hillside where the cables were bolted into rocks beside precariously perched platforms — or so it seemed as I teetered on the edge.

As Jacob Salgado, the second guide, clipped me onto each cable, he reminded me to lean back, straighten my legs, point my feet and fly like the wind. “Remember, it’s very long,” he said, prying my hand, locked in a death grip, off the cable. “If you brake like that you won’t get to the other side.”

The next “canopy” — a sign pointing to the Darwin Trail around the village complex — was tamer. Starting early, we joined ecologist Diego Rojas, from the Simon Bolivar University in Santiago, for a half-day walk around the perimeter.

Diving into the forest, we stopped beneath a stand of giant beech trees to look at the flora and to learn why Huilo Huilo is classified as a rare temperate rain forest.

The beech trees, said Rojas — “coihue” and “rauli,” in Mapudungun, the native Mapuche language — “are members of the Nothofagus genus, indigenous to the area since the Jurassic period.”

But the forest was isolated when the supercontinent Gondawanaland broke up, creating today’s continents. Now an eco-island, the forest occupies a limited range, between 35 and 40 degrees south and 2,300 and 3,900 feet elevation.

Farther along, we stopped at the Darwin Frog Museum, a one-room cabin with exhibits founded to support research into the fungi killing this and other frogs worldwide. When Rojas explained that the chirp-chirp heard overhead was a recording of the endangered frog, we realized that not even this museum had a living specimen. “We’re hoping to find one,” said Rojas, shaking his head.

Challenged to locate one of the critters, we combed through the surrounding understory for a few minutes, searching under ferns and vines, but found only the wispy “guila” bush. Pronounced “huila,” said Rojas “this one grows everywhere, even when nothing else will.”  Could it have been the root of the name Huilo Huilo?

By the time we stopped to watch an Andean condor overhead and admired the pre-European Mapuche artifacts in the nearly finished Volcano Museum — named for its shape, not its contents — the sun was high in the sky. Joining the boardwalk trail across a boggy meadow, we found the third “canopy.”

“That’s Canopy Village, right there,” said Maria, a housekeeper who was pushing a cart of towels. “It’s this way,” she said, putting down the laundry and opening the door to one of the spartan wood cabins shaped like old-time pioneer wagons. The cabins, priced for campers and families, perch on stilts next to the Huemul enclosure, another of Hulio Huilo’s wildlife preservation projects. “If you look through there,” she said, pointing to the windows near the floor, “you can see the deer when they come to drink. We had three deer to start; now we have 20.”

I could have put on crampons, roped up and climbed Mocho Choshuenco’s icy summit. This guided trek, a match for glacier skiing in Norway, earns an eight on the risk-meter. Instead, I joined a snow mobile tour accompanied by glaciologist Antonio Vasquez, who also runs Huilo Huilo’s ski area. Making angels and snapping selfies among blowing snow clouds was a buzz. But it was a bittersweet buzz because the glacier is melting away. While we watched, Vasquez fetched his shovel and as he does at intervals, dug down through the snow, hollowing out a hole in the ice. Peering down at the last few year’s layers, we saw each was thinner than the one below it.

But Huilo Huilo is booming, confirming the belief that there’s only one way to save a wilderness: buy it and prevent development. In North America, governments traditionally assume this role. But in countries which can’t or won’t step up, the eco-tourism model can save scarce wilderness, as it has done in Africa, Asia, in the Pacific and elsewhere in South America.

How does it work? Individuals or groups buy a piece of land, agree to preserve most of it and dedicate space for a tourist center with lodging and services. Travelers looking for new, unspoiled destinations visit the area, stay at the hotels and spend money for rooms, food and guide services, creating jobs for local residents. An unbroken circle, it’s not “by and by,” but now.

And about those “canopies.” For me, none rivaled the real canopy, the treetops reaching for the sky, brushing against the balcony of my fourth-floor hotel room, framing my view of Mocho Choshuenco. The next best thing to a treehouse, this was where I went to catch the sunrise, watch the birds twitter and follow the stars. Looking toward the horizon, Huilo Huilo’s 250,000 acres were all mine.

THE NITTY GRITTY: The resort is at Neltume, a village near Lake Pirehuico. Fly to Santiago, Chile, and on to Temuco airport, a two-hour drive from Huilo Huilo. Rent a car or hire local transport. Summer months, December through February, is warm and dry. Spring and fall are beautiful; winter recreation includes skiing.

(Anne Z. Cooke, who divides her time between the Santa Monica and the Rocky Mountains, believes that travel opens doors.)