Male polish: More guys turn to salons to ‘manscape’ and pamper themselves 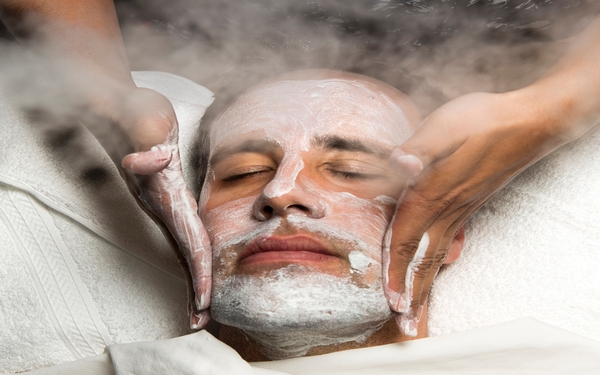 There was a time, not all that long ago, when the well-groomed man kept his haircut short and his beard trimmed. Maybe, if he was really dapper, he got his nails buffed, too.

That’s not enough anymore for some, and an increasing number now regularly go to get “manscaped,” i.e. pruned, waxed, plucked, threaded and shaved from head to toe.

“We’ll do an entire wedding party of groomsmen, and they’ll make it a big joke to get it done,” said owner Stev Fregoso of Villain Salon and Manscaping in downtown Placentia, Calif. He started out decades ago working on celebrities in private homes or on studio sets, before expanding his business to the public.

But, wait. Aren’t men supposed to be hairy? Isn’t that what being masculine is all about? Until fairly recently, only actors, body builders and swimmers fessed up to removing hair, and that was for professional reasons.

“Honestly, 10 years ago it was still a bit taboo,” said Melani Mari, owner of Bare Skin Studio in Laguna Hills, Calif. “In the last five or six years, it’s gone from being hidden in a dark corner to having people like me.”

The expression “manscaping” was popularized by the TV show “Queer Eye for the Straight Guy,” in which gay men tried to help straight ones become more stylish. The show encouraged heterosexual men to embrace rituals such as removing hair, using skin lotions and having facials.

A few years ago, it was rare to see a man having a facial, a pedicure or being slathered with lotion in public. Nowadays, it’s increasingly common. And then there’s the hair removal.

For years now, women have been heading to salons in record numbers to be waxed and plucked and threaded from their eyebrows to their toes, undergoing painful procedures with exotic names such as the “Brazilian.” Think bikini wax gone wild.

And, before you know it, they encouraged their men to do it, too.

Experts say many women now want their guys to take it off, take it all off — from eyebrow tweezing to the intimate waxing procedure jokingly called a “boyzillian” or “bro-zillian.”

A middle-aged pilot from Aliso Viejo, Greg Schwartz first came into Mari’s salon to have his arms waxed, to better show off his colorful tattoos. Eventually, with the encouragement of his then-girlfriend, he asked about Brazilians, and is now a steady customer.

“I’m a man’s man,” Schwartz said. “I’ve got a beard, I’m tatted up, I ride a Harley and I’ve got a bulldog. But I think men have learned to put down the club and the rock and listen more (to the women in their lives).”

The trend toward a new, less hirsute society has not only spawned magazine articles but even books and academic study.

A 2012 article in Cosmopolitan magazine suggested that women could predict what kind of boyfriend a man would make, based on how much and where he chose to be shorn.

A guy who doesn’t remove hair from his nether regions might be “sweet but lazy,” one expert opined.

And it’s not only younger men who feel more comfortable now using body-conscious services. Mari said that many of her clients are middle-age executives who want to appear youthful, for the sake of their careers and the women in their lives.

“I service executive types who have enough disposable income to afford my services,” Mari said. She said most clients spend more than $100 per treatment. “They get everything from head to toe, including chemical peels for men. The older guys work really hard to make their bodies look good, but their sugar babies want all the hair gone, too.”

For those who want to go hairless at home, all manner of male-oriented tweezers, waxers, electronic hair removers and other products are for sale, ranging in price from $7 to $500.

On Amazon.com, Nair For Men sells a depilatory cream for $13.95. Can’t reach your own back? Buy yourself the “MANGROOMER Do-It-Yourself Electric Back Hair Shaver” with an extra-long reach for $29.95.

The new body-grooming craze mirrors a greater acceptance of men’s interest in how their bodies look. Guys who once went to the gym and left the rest to nature are now getting tattooed, pierced, moisturized and waxed.

Fregoso said men come to his Placentia salon because they’ve grown tired of going to women’s salons, where the emphasis is feminine. Heterosexual men make up about 75 percent of his clientele, he said, along with some women who enjoy the atmosphere in his salon, which is in a historic building with exposed brick in downtown Placentia.

Clients can have a beer or a shot of whiskey while they’re waiting for their turn to lie on the linen-draped massage table and be shorn.

Personally, he likes his clients to walk out looking trimmed, but not overly groomed.

“We like men who look like men, just cleaned up,” Fregoso said. “We will actually say, “No” if someone wants to look overly feminized.”

He said he’s more aggressive with male clients and less ginger, because quicker is less painful, like pulling off a Band-Aid.

“Men’s skin and body hair is much different than women’s,” Fregoso said. “It’s governed by testosterone and fitness levels. Women’s skin is a lot softer, and the hair is softer, thinner and easier to remove. Men have tighter pores, and their skin is thicker.”

Mari said she was a financial analyst before going back to school to become an esthetician. She intended to make a career doing makeup and skin care, but discovered a new market, almost by accident.

“The whole thing started five years ago as a drunk party trick,” she said. “I was still in esthetician school, and the only ones who would let me practice on them were my guy friends.”

She discovered that she enjoyed working with men, and eventually opened her own salon geared to guys, though women are welcome, too.

Men are “bigger babies” than women at enduring the pain of waxing, she said. She said that 90 percent of her business is male, and two-thirds of them want a Brazilian.

“They want to be clean — it’s a hygiene thing,” she said. “A lot of sports guys do triathlons or bike, and less hair causes less chafing and pulling.”