Fire up the presses for grilled cheese sandwich cake 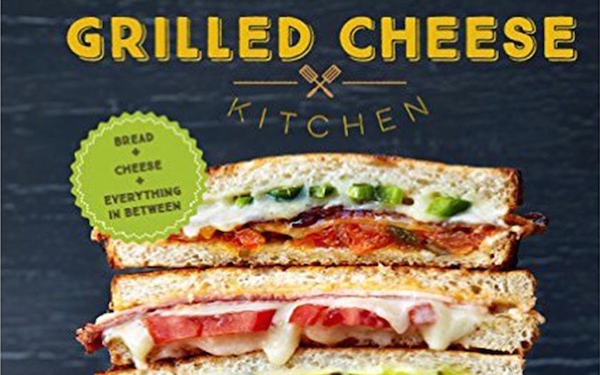 The griddle-y goodness of the world’s most mouthwatering comfort food deserves a cake on a pedestal. And that’s exactly the idea of the grilled cheese birthday cake, a creation included in “Grilled Cheese Kitchen” by Heidi Gibson with Nate Pollack (Chronicle Books, $19.95).

Released last month, the cookbook includes 39 grilled cheese recipes, along with soups, side dishes, mac & cheese, pickles and spreads. The authors, a husband-and-wife duo, know that of which they write: they own American Grilled Cheese Kitchen, based in San Francisco. Many of the cookbook recipes are on their menu.

There’s The Piglet (a take on ham and cheese), the St. Patrick’s Day grilled cheese (with braised cabbage, Guinness, mashed potatoes and Irish soda bread) and one of their most popular, The Mousetrap (a cheddar, Havarti and Monterey Jack mashup.)

And then there’s this ginormous birthday cake.

Gibson writes, “I call this savory assembly a ‘birthday cake,’ but I’ve served it at weddings, too, and I’ve never seen an actual cake disappear so fast. Kids especially love being able to reach in and pull a piece of sandwich out of the tantalizing tower.”

It’s a bit of a commitment to make — but sooooo worth it.

“Time is of the essence; it’s best when the sandwiches are still hot,” she writes. “There are a lot of moving parts that make it tricky for one person to get the timing right; enlisting two or even three people will make the process smooth like butter.”

Fire up the oven and start the presses — it’s time to get griddling!

You will need three nested springform pans, approximately 6 inches, 8 inches and 10 inches; three large baking sheets; and an electric griddle or stove-top griddle pan. If you can find bread you like made in the round loaves called boules, they are easier to work with for this recipe — the curves of the bread fit better into the springform pans than rectangular loaves.

42 slices rustic artisan bread such as sourdough or levain, preferably cut from 5 to 6 boules

1 can processed cheese spread with a decorative nozzle, any flavor (optional, but hilarious)

1. Spread some of the butter, dividing it evenly, on one side of each bread slice, dividing it evenly. Place 10 slices, buttered-side down, on a clean cutting board or counter top. Place one slice of Cheddar, one slice of Jack, and another slice of bread, buttered-side up, on top of each. Move the 10 plain cheese sandwiches onto one of the baking sheets (it’s OK to crowd them).

3. Next, place four pieces of bread, buttered-side down, on the cutting board. Place one slice of Cheddar, three or four rounds of jalapeño, one slice of Jack and another slice of bread, buttered-side up, on top of each. Move the jalapeño-cheese sandwiches onto the third baking sheet. (At this point, you can wrap the baking sheets tightly with plastic wrap and refrigerate for up to 1 day.)

4. Heat oven to 350 degrees and heat a griddle to medium-high. While the oven is heating, get your workspace ready for assembly. Have a spatula, clean cutting board, and bread knife close by. Remove the bottoms from all of the springform pans. Place a serving platter at least 12 inches in diameter nearby and place the large springform ring, snapped closed, on top of the serving platter. (Or just assemble on your serving surface.)

6. Working quickly, fit about four whole hot plain grilled cheeses into the largest springform ring, directly on the serving platter. Cut pieces out of a fifth grilled cheese to fill in any sizeable gaps in the first layer. (If you have helpers, one can tackle this step while someone else toasts the sandwiches on the griddle.) Repeat to make a second layer in the large springform ring with the remaining plain sandwiches. Arrange the second layer so that the seams between individual sandwiches and pieces are offset. This should use up most or all of the 10 plain grilled cheeses.

8. Unlatch the smallest springform ring to widen it and carefully lift it off the top layer. Then unlatch and remove the middle ring, and finally remove the bottom ring. Tuck in any sandwich pieces that become dislodged. If desired, decorate the cake with the processed cheese spread (florets on each layer are easiest).

9. Serve immediately, but don’t cut the cake — tell your guests to pull out the piece they want.