Dawes making it the old-fashioned way 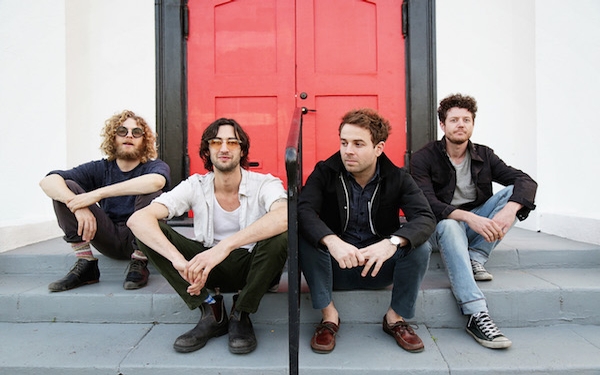 So far, Southern California band Dawes has managed to sell a respectable amount of albums without the benefit of a hit song, or much attention from places like Pitchfork. The group is solidly good and vaguely nostalgic, rooted in-but not indebted to-the deeply romantic ‘70s folk-rock of artists like Jackson Browne.

Dawes just wrapped up recording on a follow-up to its 2015 breakthrough album “All Your Favorite Bands” (named for a line in the title track, “May all your favorite bands stay together,” that’s meant as a benediction), one that they hope will advance, if not necessarily erase, their reputation as Laurel Canyon’s most dedicated musical archivists.

The new album was produced by Blake Mills, a childhood friend of frontman Taylor Goldsmith, and a partner in Goldsmith’s first band, Simon Dawes, which slowly evolved into the present day Dawes after Mills’ departure.

Before heading off on a brief pre-summer tour, Goldsmith got on the phone to talk about the new album (it’s more bass-and-keyboard-centric than its predecessors), and the benefits of being only slightly cool.

An edited version of that conversation follows:

Q: What can you tell me about the new record?

A: We’ve always had this aspect of this band where people say, “I love your records, but your live show is so much better.” I think with this record, we’re gonna get that statement in reverse. We’re looking forward to adding this to the spectrum of what we do, because it’s new territory.

Q: When you (and Mills) were in a band together, you had a very different sound. You were post-punk, right?

A: That’s the weird thing that we would read and would laugh about, but we were listening to David Bowie and the Kinks, those were our biggest influences. There was never a period when we even understood what a post-punk band is, or was. We sounded different than Dawes, for sure.

Q: Have you been a working musician, supporting yourself the whole time since?

A: Yeah, (before Dawes’) first tour with Delta Spirit, we were just playing gigs around LA, and we finished recording (our first) record, and as far as we knew, that was it. We’d figured, well, at least we got to record some songs and that was a pleasure to do, and now I’m going to go back to my job at this homeowners insurance company, talking to plumbers about pool heaters. Once we had that tour, making five dollars a piece between four guys, we all quit our jobs, packed our house up, and went on the road. From that point on, we were supporting ourselves.

Q: You’ve been tagged as a Laurel Canyon band, fairly or not. Can you understand the whole mythology of that, why that draws people in?

A: Yeah, but I think if you were to tell Joni Mitchell or Crosby, Stills & Nash, “Hey, you guys are SoCal ‘70s artists,” I’m sure they would’ve said, “Well, hold on, we’re more than that.” I think that’s the impulse of any artist. It’s a little bit uncomfortable being packed into something, especially when it’s a surprise to them. We never really spent any time in Laurel Canyon, though I know it’s not a geographical thing, it represents a sound and a certain time period. I definitely relate to a lot of those artists. Warren Zevon is my favorite songwriter who ever lived. I definitely think of that as being part of our first few records. It’s something we’ve grown out of.

Q: How do you incorporate that and still sound modern? You don’t want to be someone’s Instagram version of a ‘70s folk band.

A: For us, it’s never been some sort of plan of attack. It’s, what kind of music can we play that makes us feel most expressed, and happiest? We never thought the music we’ve made would allow us the career we’ve had, as modest as it’s been. We’re very grateful. It’s not like we’re the Arctic Monkeys or something. We’ve been able to sneak by.

Q: When you open for someone like Alison Krauss, do you ever think, “This isn’t going to help us get into Pitchfork?”

A: Right, right. I’ve always liked that about our band, I like that we could ride that line. The same year we opened for Bob Dylan, we were Conor Oberst’s opening band. I don’t think there are too many bands that could dip their toes into both worlds.

A: Yeah, it becomes a corporate thing. What we all love about bands is the fact that it comes off as a gang. You see early videos of the Beatles laughing and roughhousing, and you think, man, I would fit right in with them. When it does get to a point where bands are making records that no one even listens to, and they go on these big, huge tours and it feels like a cash grab, and you hear these stories about how no one’s even friends anymore, that gang aspect goes away. Obviously, there’s the music to hold onto, but I feel like when you initially fall in love with a band, it transcends the music.