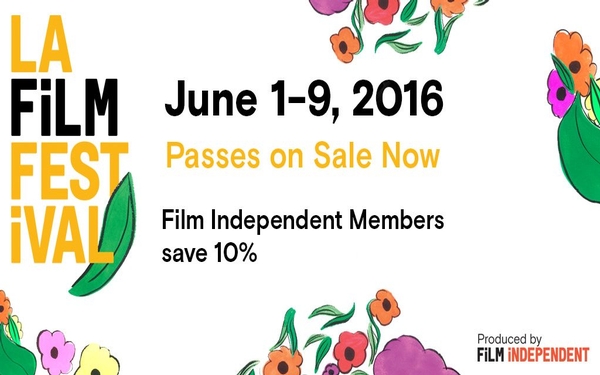 The 2016 LA Film Festival will screen a diverse slate of feature films, shorts and web series, along with programs such as the Filmmaker Retreat, Coffee Talks and Master Classes. The Festival runs June 1-9, 2016 at the ArcLight Cinemas.

“Our Programming team, led by Roya Rastegar and Jennifer Cochis, killed it,” said Festival Director, Stephanie Allain. “The competition lineup of 42 world premieres echoes Film Independent’s mission to celebrate diversity and showcases a multitude of innovative, fresh voices. We can’t wait to share these films with audiences and industry alike, and, following years which saw films like Meet the Patels, Code Black, Nightingale, The Drew, Out of My Hand and French Dirty acquired out of the Festival, are confident that 2016 will mark our best Festival yet.”

"Discovering storytellers is our raison d’e?tre,” said Roya Rastegar, Director of Programming. “We invest a great deal to learn about filmmaking communities across the globe. We look for films with conviction in perspective, style and voice.”

"Curating films for LA audiences is so special because Angelenos have a uniquely homegrown love of cinema," added Creative Director, Jennifer Cochis. "It's with true film lovers in mind that we program: from political theater to musical theater, we're highlighting storytelling in all its forms."

The 2016 LA Film Festival, which will have its headquarters at the ArcLight Culver City, announces a diverse slate of 56 feature films, 58 short films and 13 short episodic works representing 28 countries. Previously announced, the Opening Night Film is the World Premiere of Ricardo De Monrtreuil’s Lowriders, sponsored by Jaeger-LeCoultre. This year’s Guest Director is Ryan Coogler (Fruitvale Station, Creed) and Ava DuVernay (Selma, Middle of Nowhere) and Array Releasing will receive the Spirit of Independence Award. More special screenings and programs will be announced in the coming weeks.

Passes are currently on sale to Film Independent Members and the general public. In addition to access to screenings and events (even after they sell out), Festival passes provide access to networking receptions and the Festival Lounge, where pass holders interact with Festival filmmakers and professionals in the film community. General admission tickets to individual films go on sale to Film Independent Members beginning Thursday, May 5 and to the general public beginning Tuesday, May 10. Contact the Ticket Office for passes, tickets and event information by calling 866.FILM.FEST (866.345.6337) or visit lafilmfestival.com.

Documentary Competition (12) Sponsored by Loyola Marymount University School of Film and Television. Compelling, character-driven non-fiction films from the U.S. and around the world.

World Fiction Competition (6): Unique fiction films from around the world from emerging and established filmmakers, especially curated for LA audiences.

LA Muse (6): Fiction and documentary films that capture the spirit of L.A.

Nightfall (6): From the bizarre to the horrifying, these are films to watch after dark.

Short Films (58): From over 2,500 submissions, the short films selected represent 15 countries and 64% are directed by women. Short films are shown before features and as part of seven short film programs. Shorts will compete for juried prizes for fiction and documentary shorts, as well as an Audience Award for Best Short Film.

Future Filmmakers Showcase: High School Shorts (33): The LA Film Festival’s Future Filmmaker Showcase brings to the big screen the best films made by budding young filmmakers from across the country and the globe. In this diverse slate of films, incredibly accomplished high school students will present wild comedies, moving dramas, mesmerizing animation, introspective experimental films and everything in between. Program sponsored by Loyola Marymount University School of Film and Television and Time Warner Foundation.

Episodes: Indie Series from the Web (13): A showcase of independently crafted web series, celebrating rising creators whose work and subjects are innovative and unfiltered.

The Ghost and The Negro, dir. Sylvester Folks, USA

For more information and to purchase tickets, visit, www.filmindependent.org/la-film-festival/