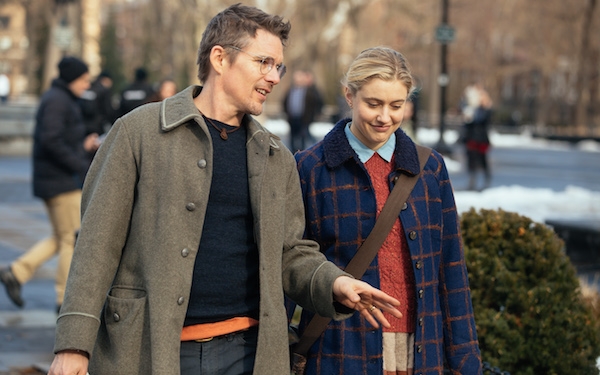 When you put Greta Gerwig and Rebecca Miller in a room together, what you will see are two artists who have a will to project their colors and splendor in a way you and I probably don’t encounter all too often. It’s a new yet entirely familiar feeling, like these worlds they create are of a parallel universe that we can taste but cannot see. If you don’t know what I’m talking about, ah, that’s good and well, but perhaps you will once you see Maggie’s Plan play out.

Though not known for comedic storytelling, writer-director Rebecca Miller (The Private Lives of Pippa Lee, Personal Velocity), found a piece that wreathed with absurdity—that sweet, perfect absurdity that comes with stories of modern love. Upon receiving chapters from Karen Rinaldi’s as yet unpublished book, The End of Men, Miller saw a distinct opportunity to flex a new muscle. Maggie’s Plan would be a matter of exploration. It’s little surprise that her characters go through a similar journey of self-discovery.

This Maggie (Gerwig, Frances Ha!) is a thirty-something school administrator who’s looking to start a family, even if on her own. While she looks for a sperm donor from old acquaintainces and pickle entrepreneurs, it’s in her unexpected meeting with John (Ethan Hawke, Boyhood), a professor and self-professed novelist, that she sees that she may not have to be alone for life after all. There’s one problem, however, and that comes in the form of Georgette (Julianne Moore, Still Alice), John’s eccentric, combative, and brilliant wife who has driven him to wit's end. So, John leaves Georgette for Maggie, and while at first that seems good and dandy, it may so happen that soon, Maggie may want to give him back.

“I think what’s so fun about this movie is it’s three really smart intellectual, capable people who find themselves powerless over love,” Gerwig attests, though that may be a simplification.

Powerless becomes foolish becomes childish becomes strangely progressive as this trio seeks to find that sweet spot where everyone can be happy, even if by unusual means. As Maggie’s plan to reunite a marriage that she directly destroyed is chaotic and assuredly disastrous, it’s also bizarrely healthy, as if an antidote to the divorce crisis we hear so much about these days. She may have crumbled one to bits, but she might as well try to put it back together as she sees her own fall through the cracks.

As Miller explains, “I build up enough reality in the character so the character sort of starts telling me where its going. I do feel that, even though Maggie kind of has an old fashioned quality about her in some ways, like her modesty and her ethics and stuff, it’s still a very modern character and she’s almost passed her own time. She doesn’t quite fit in to our time because she’s almost like from the future the way she sees.”

As it turns out, Maggie became somewhat of a role model, not just for Gerwig, but also to a lot of people on the set who viewed the character as untethered to many of the emotions that often hinder people in their connection to others. Maggie has found a way of transcending that expectation.

“I feel like what we would say a lot is how we wished we were more like Maggie in some ways. What I really love about her character is that she has this unshakeable commitment to her inner truth and her honesty and she moves through the world without guilt,” says Gerwig. “Guilt is not operative in her decision making, which is very refreshing.”

To have the world engage with Maggie’s subconscious departure from that sense of guilt or need to unnecessarily sacrifice her own happiness, Miller constructed a keenly aware environment to reflect her ever-shifting ideals of love.

“The idea of [Maggie’s first apartment] was based on the apartment that I had sublet from a poet that was absolutely full of books, but the whole idea is that she also has her own books and loves books. The second apartment being empty, my idea there was—it’s not exactly empty, it’s just a little more happenstance-ish because [John and Maggie] haven’t completely finished moving in. There’s a sense that this is an unfinished life. They aren’t quite there yet. Perhaps unconsciously, this is a couple that hasn’t completely committed to each other on some level. There’s some feeling that it’s not quite a home—it’s almost,” says Miller.

So, we can look back on these two storytellers, Gerwig and Miller, who have constructed, through swift wit and stellar performances by an ensemble cast, a world where we don’t have to adhere to any preconceived notions of love, or commitment, or self-worth. And while neither likes to consider a woman director a woman director versus the alternate plain director status, Gerwig believes there needs to be a stepping up from the ladies of the world who may not consider themselves yet worthy to pick up a camera and make a story like Maggie’s Plan that confidently reminds us of these invisible shackles that can be broken through.

Gerwig exclaims, “This is something I think about a lot… I have noticed, there are far more guys who say, ‘I don’t know what I’m doing. I don’t know how to work a camera. Let’s go make a movie.’ Women will say, ‘Oh no, I can’t do it until I know everything and I’m sure about all this stuff,’ and I feel like, those guys don’t know more than you. They do not know more than you. You can go do this, and you will learn as you’re doing it, but I feel like getting your hands dirty in that capacity early is really important. I think, get out in front of it and obviously do what you love, and if what you love is producing or what you love is acting or writing, do all of those things, but if you have an inkling in you that you want to direct and you think you’re not ready, don’t worry about it. Just do it.”

Now you can see the drive that pushes the cart of Maggie’s Plan over an unlikely hill and gives us something new to breathe in. Gerwig and Miller subscribe to nothing else but sense of newness, of exploration, and the pitfalls that come with it. They are determined. They are creators.