He’s Amazon’s man in Hollywood — and at Cannes 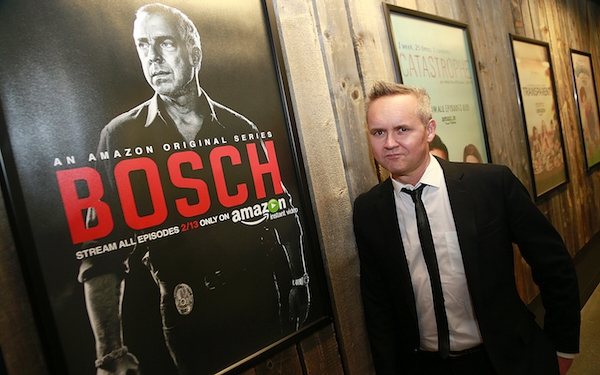 The executive charged with making Amazon Studios a major player trekked last year to Cafe Carlyle in Manhattan, where Woody Allen has a standing gig as a jazz clarinetist.

Roy Price didn’t come to hear Allen play — he came with a proposal for the legendary filmmaker to do a TV series for Amazon.

Allen was skeptical, Price recalled. He had basic questions about what a streaming service actually is, and struggled to grasp the idea that people watch multiple episodes of a show in one sitting.

“It was new for him,” Price said. “Of course, there was skepticism.”

Price pressed on, ultimately getting Allen to agree to do a six-part comedy series in which he’ll co-star opposite Elaine May and Miley Cyrus. The relationship built from there, with Amazon putting up $15 million to buy U.S. distribution rights for Allen’s latest film.

That film, “Cafe Society,” was set to open the Cannes Film Festival on Wednesday — a landmark moment for Amazon and the man driving its ambitions to make entertainment a major draw to its Internet commerce site.

A former Walt Disney Co. executive, Price, 48, built considerable Hollywood street cred by hauling in Emmys and Golden Globes for acclaimed shows “Transparent” and “Mozart in the Jungle.” Price and his team also bought several movies at Sundance and have four other films opening at Sundance besides “Cafe Society.”

Amazon Studios has had to move office spaces to accommodate its growing operations. It once operated out of a shared office with IMDb at the Sherman Oaks Galleria but now occupies at least 75,000 square feet of space at the Water Garden complex in Santa Monica. Amazon Studios has about 150 employees.

Amazon has a long way to go to catch up with Netflix, the streaming giant with a larger global network of customers and stronger ties with the film industry.

But the e-retailer has taken bold steps to grab a larger share of the streaming business. Amazon recently launched a monthly stand-alone streaming option of its Prime Video service.

Amazon also has deep pockets. It spent $1.3 billion on its Prime Video service in 2014 alone (it does not break out spending on original and acquired content) and executives announced plans to further boost spending on expanding the service this year. Netflix invested $3 billion in 2014 and is spending $6 billion in 2016.

Wall Street has taken note. Shares in Amazon shot up 10 percent on April 28 after the company announced $513 million in profit in the first quarter. They rose $23.32, or 3.4 percent, to $703.07 on Tuesday. Amazon doesn’t break out figures for its film and TV business, but company executives said part of the growth has been fueled by Prime subscribers.

“Their strong belief is the more time you spend in the Amazon ecosystem, the more money you spend with Amazon,” said Richard Greenfield, a media analyst with BTIG Research. “The key for Amazon is how do they get you to spend more time in that ecosystem — and it’s with having a deep catalog of movies, TV and music.”

Price takes a long view of Amazon’s place in the shifting media environment.

“The Hollywood business has been experiencing continual change since about 1915, when Charlie Chaplin was in Venice,” Price said. “The current time is no exception … . You have to accept there will be constant change in the future. We’re a part of that.”

An English major from Harvard University, Price often name-drops authors: quoting cyberpunk novelist William Gibson in the middle of a conversation about digital disruption in entertainment or noting his plans to read Lord Byron poems on a recent getaway to Palm Springs.

His trademark look is dark jeans and a black leather jacket — which his cohorts often playfully tease him about. Though, on a recent trip to a table read of a children’s TV pilot, Price was sporting harem pants and Yves Saint Laurent sneakers stitched with the words “yeah baby.”

“He’s not a cookie-cutter executive,” filmmaker Spike Lee said. “And he talks to you like a human being, not a car salesman.”

Price also maintains a level of interest in the creative process that is not typical of most studio executives.

When Amazon Studios greenlit a TV adaptation of Michael Connelly’s “Bosch” detective novels, Price, a longtime fan of the book series, had a suggestion for an episode in the first season. Price thought Connelly and executive producer Henrik Bastin could add more tension into the story by weaving in a plot from “Echo Park,” a book that hadn’t been a part of the first season. And Price wanted to see how it all came together, coming to the Los Angeles set to watch the scene that involved a cave full of rotten corpses.

“Roy was like, “I gotta check that out,’” Bastin recalled. “He really knows a lot about these characters, and it is very rare that the head of the studio pitches a major story idea, and even more rare, that when it’s pitched, it’s … great.”

The Los Angeles native grew up in Beverly Hills. His father was Frank Price, who ran Universal Pictures in the 1970s and ‘80s, and his grandfather was Roy Huggins, creator of classic TV series such as “The Fugitive” and “The Rockford Files.”

Price recalled weekly Sunday viewings at his father’s house of films such as Oliver Stone’s “Midnight Express” (1978) and Hal Ashby’s “Being There” (1979). Unknowingly, Price said, he was learning the art of “going with your gut.”

“My father would often leave after about 20 minutes because he got the idea of whether it was working in that time,” Price said. “Which, at the time, I thought was confusing. But now, actually, I understand. Once you get the idea — unless you love it — you just have to check the box and move on to the next.”

Price forged his own path in Hollywood in 1984 as the assistant to Creative Artists Agency agent Richard Lovett, who now runs the agency. Shortly after earning a law degree from USC, Price secured a development job at Disney, overseeing animated series at the studio for six years.

“I got a lot of experience in just learning how to make a TV show; how to make something,” Price said.

Price left Disney in 2000, saying he wanted to shift his focus to digital distribution strategies.

After working as a consultant, by 2004 he had moved his wife and three kids to Seattle to start what became known as Amazon Video. By 2012, he was spearheading the launch of Amazon Studios in response to the increase in original programming by other media companies.

“It was evident that everyone was eventually going to have to get into originals to make their services unique,” said Price, who now lives in downtown L.A. “We discussed how to approach it in an Amazonian way and we got to going.”

Amazon’s first original series, “Betas” and “Alpha House,” premiered with little fanfare in 2013. But things picked up steam the following year with the debut of “Transparent.” It would quickly establish itself as the streaming service’s seminal show, a not entirely sure-fire result considering its bold subject matter: The half-hour dramedy centers on a middle-age transgender woman and her family. It has been widely reported that Netflix chose not to bid on the series.

“There are many deals in the pipeline for the film group as a whole — same with TV,” Price said. “The challenge is moving fast and staying great. You have to keep the bar high. There’s only one way you can evolve the brand and perception, which is to deliver. You just gotta lay it down.”