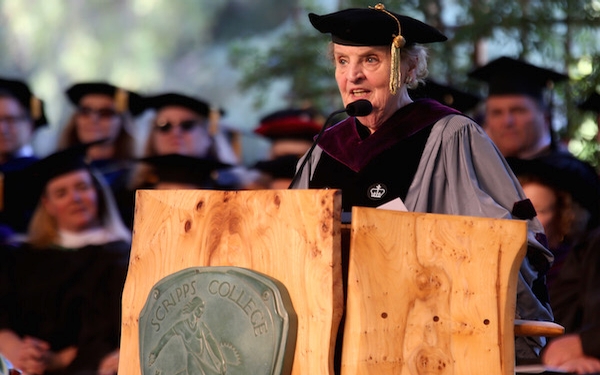 Madeleine Albright is used to tough crowds. As the first woman to serve as U.S. secretary of State, she traveled almost 1 million miles to contain the world’s dictators, hammer out nuclear proliferation agreements and mediate peace talks between Israelis and Palestinians.

On Saturday, Albright had this to say to the 2016 graduating class of Scripps College in Claremont, where students and professors had called her a “war criminal” and took umbrage at her suggestion that “there’s a special place in hell” for women who don’t support Hillary Clinton’s presidential campaign:

“We should use our opinions to start discussions, not to end them.”

Speaking to more than 600 people at the commencement ceremony on campus, she challenged graduates at the women’s college to probe deeply into all perspectives on tough issues “so that we are not defined primarily by what keeps us apart.”

“We are not going to have the kind of cooperation we need if anyone insists on their own version of reality,” she said. “To me, this is the great divide in the world today — not between liberal and conservative, rich and poor, or between any one race or creed and all the others. It is between people who have the courage to listen and those who are convinced that they already know it all.”

In an allusion to her comments about the Clinton campaign, she smiled and said, “Rest assured, there’s a special place in heaven for anyone who speaks truth to power.”

It was a sharp contrast to the reaction that followed her selection as commencement speaker. Some students said they would have preferred to hear from a person of color. Others had denounced Albright as a “white feminist” and “repeat genocide enabler.”

Twenty-eight Scripps professors joined their protest, pledging not to participate in the official commencement procession. In an open letter, they cited Albright’s role during the Clinton administration at a time when U.S.-led sanctions were blamed for the deaths of Iraqi children and the United Nations failed to stop the massacre of hundreds of thousands of people in Rwanda in 1994.

Albright had been invited to speak at the graduation by leaders of the Scripps senior class. Jennie Xu, a co-president, said she felt it was quite an achievement to book Albright, who some regard as the epitome of a feminist role model.

Albright and her family fled Adolf Hitler as he pushed into Czechoslovakia during World War II. Like the Scripps students, she attended an all-women college.

Years later, as secretary of State and U.S. ambassador to the United Nations, she made women’s issues central to foreign policy.

“She was our top choice,” Xu said. “I was really, really ecstatic.”

Art professor Susan Rankaitis was not among the faculty who signed the protest letter, but she said she was glad Albright’s selection had sparked a vibrant discussion about what it means to be a role model.

“In the long run, this is a good conversation to have,” Rankaitis said Saturday. “We should continually test our boundaries.”

Speaking from the dais, Albright said she had met “with members of the Scripps community who were concerned their views were not being represented at this ceremony.”

She said she told them that the purpose of her speech was not to “defend a particular policy, but to talk about the importance of hearing from — and actually listening to — all perspectives.”

“This afternoon,” she said, “I am not suggesting that any of you — graduates, students, alumni or friends — cast aside your own opinions or downgrade the value of your perspectives on life.

“I ask only that you make a real effort to keep learning more. And learning, by definition, means exploring areas of existence and opinion with which you are not already familiar.”

About a dozen professors who had skipped the procession sat together in a back row, their regalia left at home. When Albright was finished speaking, they clapped politely.