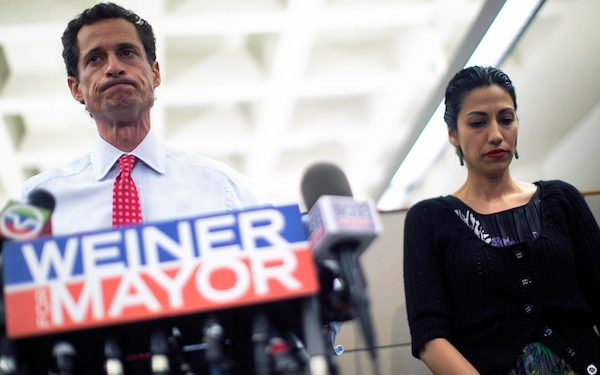 Back in 2011, a political scandal leapt to the top of headlines across America, and not because of its particular menace or its effect on a large government scale. It was just plain absurd, and as many would admit, hilariously so. Overnight, a young congressman became a joke, with his promising political career crushed under the bizarre nature of his public disgrace. But what’s even more titillating than the crashing and burning of a politician is his attempt to rise out of the ashes, and that’s why the new documentary Weiner succeeds on so many levels, most notably the tragic one.

If you happened to miss the news on this particular spring morning in 2011, charismatic New York congressman Anthony Weiner had been caught sending explicit pictures of his family name to a pretty follower on Twitter in the midst of his blossoming career. Naturally, his status, his name, and his family all became dirtied under the scrutiny of the hungry media, and after a month of attempting to stamp out the flames and only coming up with more evidence of sexual encounters with women who weren’t his wife, he resigned from his post.

So, when directors Josh Kriegman (“Made”) and Elyse Steinberg (Waging a Living) heard that Weiner had announced his intention to run for mayor of NYC, only two years after his scandal ravaged his public identity, Kriegman knew there was a story to capture. It also helped that he served on Weiner’s first mayoral campaign back in 2005, giving him a keen understanding of the character, the public figure, and the man who has been stripped of so much dignity and is yet still willing to fight back to the top.

Winning the Grand Jury Prize for U.S. Documentary Feature, and seeing how, despite a man’s mistakes we can still find a wealth of sympathy to lend, Weiner has found the heart of the political realm that is so often impossible to encounter in our current climate of fear mongering and corruption.

Kriegman and Steinberg followed Weiner from day one of his 2013 campaign for mayor and stayed with him to the end. What this warranted was previously unattainable access to the way Weiner works both professionally and personally. It is that partnership, or more appropriately collision of those two worlds where Weiner builds a sense of hope and redemption in a seemingly despairing situation, and then transforms into that classic train wreck you can’t help but watch fall off the tracks.

His family, you see, is anything but normal. His wife Huma Abedin has been the longtime aide and chief of staff to Hilary Clinton throughout much of her modern career. She also happens to be Hilary’s current personal assistant during this crazy election mess. I mean, Bill Clinton officiated Anthony and Huma’s wedding for crying out loud. So, not only was Anthony’s political title squandered in the wake of the scandal, but so was Huma’s, who was arguably the more effective political figure of the two.

So what becomes entirely surprising in the scope of Weiner’s narrative, is Huma’s willingness to take part in this documentary at all, which abides by the verité laws of doc filmmaking by keeping an assured distance from the foils of what’s taking place on camera and merely acts as witness.

What we witness is hard. It’s Huma standing by her husband’s side despite what he’s put her and their young son through, and then supporting him through an at-first hopeful mayoral campaign, and then suddenly having to deal with scandal all over again. Their marriage is as bare and vulnerable as ever.

And then there’s the additional factor that many of his followers, passionate citizens of NYC, have also steadfastly supported him throughout the most precarious moments of his career and now must reevaluate their own mode of honor. It almost seems impolite to keep watching, and yet this is politics. And media. And how the two tango into this firestorm of personal vendettas despite the better nature of the wide picture—our country and the effectiveness of our government.

Weiner then leaves you with the choice of how to think about Anthony Weiner. He’s a generally good guy who’s made some really poor choices—some may even find them unforgiveable. But there’s something to be said for a man who is willing to sit down in front of a camera after not one but two major public humiliations. By all means, respect him or hate him, it makes no difference, but whereas the former congressman used to be synonymous with a punch line, the butt of every joke, Weiner brings us back to the reality of imperfection, of our insatiable need for something to talk about, and the precariousness of success. I don’t know about you, but that all kind of scares me.

WEINER comes to the theaters in LA & NY Friday, May 20th.