Lunatics, Actors and the Rest of Us 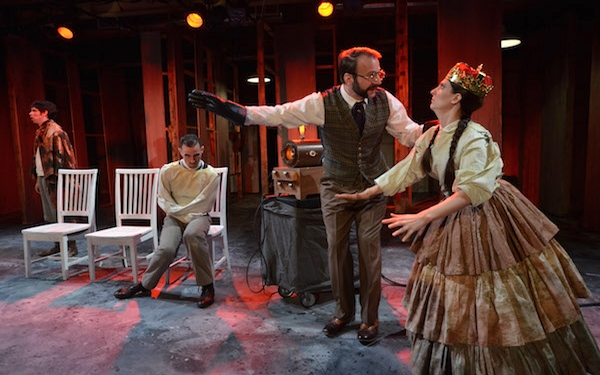 “I can make anyone feel anything,” or so states a mysterious character early on in Four Clowns’ production of Lunatics & Actors, now in a very short run at the Shakespeare Center of Los Angeles. I was hooked immediately, as was my 20-year-old companion. When volunteers from the audience, each claiming to have acting experience, sat on three chairs placed a foot apart on a stage reminiscent of One Flew Over the Cuckoo’s Nest, none of us in the audience knew where we were headed.

The character making the bold claim is Dr. Guillaume Benjamin Amand Duchenne de Boulogne. Duchenne is based on a real 19th century doctor who, by some, is credited with being the father of neurology, and whose life’s work with electroshock therapy, involved inducing emotional response in mental patients. “Inspiration is unreliable,” Duchenne says at another point, which I took to mean he needed to shock his patients into feeling emotion, or at least displaying what a given emotion looks like. And this is what gets us to the “actors” in the title. Actors train to develop techniques for generating emotions that a character—Hamlet, for example—might be feeling. But which set of emotions is “real”?

Lunatics & Actors is the brainchild of David Bridel, Dean of USC’s MFA program in Acting and directed by Jeremy Aluma. Bridel approached Aluma, four years ago with Duchenne’s story. “I have an idea that would serve your company,” Bridel remembers saying, “ But it will take you down a darker and more mysterious path than you’re used to.”  Aluma was all in, as was his skilled company, Four Clowns, which is based in LA. A seven-year-old troupe of clowns, most members met while training at Bridel’s Clown School. The group developed the material, which grew into a workshop. This production, four years later at the Shakespeare Center, is the show’s World Premiere. Prior to this production, Bridel and Aluma have enjoyed great success with the award-winning shows, Abraham & Isaac, Noah & Jonah and Sublimity, all of which have been performed throughout the United States and internationally.

Creating the show was a three-phase process. The first consisted of a series of games and exercises based on prompts and works of Shakespeare, going bigger and smaller with the emotional range. Because everyone trained with Bridel, the team spoke a common language. The second phase was Bridel going off on his own and committing some of what had occurred in the “game” phase to text. The third phase, Aluma says, “came straight from David’s brain.” Once they had a text to work from, Four Clowns, along with Bridel and Aluma, as co-directors, spent another five weeks honing and shaping the work. During this period, questions were asked of the entire team—designers, board members, etc.--Where were you interested? Where did you drop out? Aluma says the opinions at this stage were vital. After the initial workshop, the writing changed about 10%, the design and production changed about 75%, and the acting and directing changed about 50%; getting Four Clowns to what’s now on stage at the Shakespeare Center.

After Lunatics & Actors, Four Clowns, may be on brief hiatus as Aluma heads off to DePaul for his MFA. "A temporary swansong," Bridel suggests, as the two practitioners look ahead to new and divergent possibilities in the coming months. Aluma also feels they will work together again. "You go through so many ideas together, you bond with each other, and that connection will remain,"

There are only three more performance left of this incredible piece of theatre—May 26, 27, 28—and I recommend you get there. The Shakespeare Center of Los Angeles is located at 1238 West 1st Street, Los Angeles. TICKETS are $12-15 at www.fourclowns.org. Parking can be challenging so allow time to find a spot. Doors open at 7:30 and wine/beer/snacks are available.

Lunatics & Actors is a fascinating—and ultimately moving—consideration of what it is to be human—what we feel, how we feel, and what emotions look like when we’re feeling them. In 2016, when so many self-medicate to stop feeling anything, this show reminds us how much we need to.

Anna Nicholas is a playwright and novelist www.annanicholas.com

Blog
Merrily We Roll Along at The Wallis
2,717 views