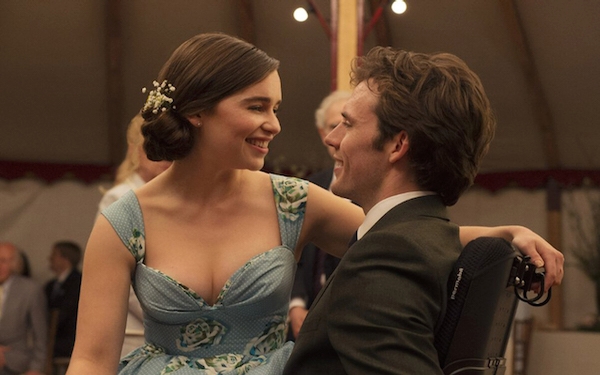 Emilia Clarke was holding a grenade launcher when she first read Jojo Moyes’ best-selling novel “Me Before You.”

Realizing how odd that sounds, the petite Brit smiles and explains the circumstances that brought together a weapon of destruction and a story of love and life.

“I wasn’t holding it for fun. We were filming ‘Terminator’ at the time,” Clarke hastily says. The London-born actress played Sarah Connor in the 2015 reboot of the sci-fi series, “Terminator Genisys.”

Moyes, author of the original book and the adapted screenplay who is seated next to Clarke, laughs and suggests that it wouldn’t surprise her if Clarke had a grenade launcher in her home.

“She’s a wild one,” Moyes says, casting a wicked smile toward the star of the film.

No matter what kind of military hardware Clarke had been packing, she knew immediately that she wanted to play Lou Clark, a quirky woman with a wild wardrobe hired to be a companion for a paralyzed young man (Sam Claflin). It’s Lou’s passion for life in contrast to Will’s realistic approach to his future that provides the initial sparks that slowly give way to love.

The role is at the opposite end of the acting scale from the jobs that have brought Clarke international stardom. Along with playing Sarah Connor in “Terminator Genisys,” she has portrayed the dragon-friendly Daenerys Targaryen in “Game of Thrones” since the cable series launched in 2011.

Taking on such a different role is not part of some master acting scheme by Clarke.

“I never have a plan. I never schedule anything in like that,” Clarke says between sips of tea. “I just get off on stories and characters that move me. In between having to play Sarah Connor, I was just crying like a child. It just jumped up and spoke to me.”

“Me Before You” has almost no special effects, a huge difference from “Game of Thrones” where people, places and unworldly things are created long after she finishes her acting. “Genisys” also had loads of scenes where Clarke was in front of a green screen.

Clarke enjoys green screen work because it forces her to use her imagination, but there’s something special about connecting with another actor dealing with real problems.

She has great praise for her co-star Sam Claflin. Finding the right actors for “Me Before You” was a lengthy process. Hundreds of actors went through tryouts before the producers — and Moyes — saw the right chemistry.

Moyes says she liked Clarke because she brings a natural warmth when she walks into a room. When asked to name the top three actors to play Lou, Moyes only had one pick: Clarke.

Lou has a wild wardrobe. Clarke ended up with 72 different outfits — each with pockets added because she felt like that’s something Lou would want.

Asked whether it’s more difficult to make an audience believe two people are in love than dragons exist, Clarke lets out a hearty laugh and says it’s tough question to answer.

“They’re weirdly incredibly similar from an acting point of view. The key is not to be thinking about what the camera is picking up but being incredibly truthful to what you are acting with. As for being in love, it was easy with this book and script. I just decided to just fall into this entire moment.”

Before ending up in the world of special effects, Clarke took a more traditional path to acting, working first in theater, appearing in commercials and making guest appearances on TV shows. Her first real notice came after appearing in the 2010 Syfy film “Triassic Attack.”

Nothing has earned her as much attention as “Game of Thrones. She picked up prime-time Emmy Award nominations in 2013 and 2015 for best supporting actress in a drama series.

Clarke has worked on “Game of Thrones” for six seasons, but she’s still not able to fully comprehend how massively popular the HBO series has become.

“I think I’ll be in my 80s and not realize what it is,” she says. “I don’t know if the penny will finally drop with that.”