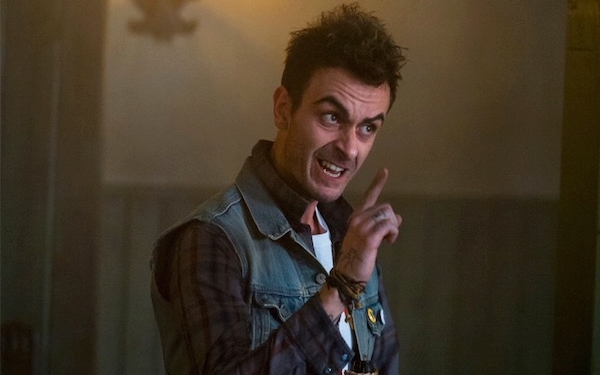 If you ever need to find actor Joe Gilgun on the New Mexico set of AMC’s new supernatural western “Preacher,” just follow the trail of blood.

“(I’m) constantly covered in blood,” the tatted Englishman playing an Irish vampire exclaims with a kind of mischievous glee. “There are hand prints everywhere, on the doors. My trailer was like a kill room.”

A distressing statement. Yet declared with Gilgun’s disarmingly captivating rapid-fire cadence, it’s as if he’s daring you to be entertained by the uncomfortable imagery. And that’s “Preacher” in a nutshell. The new drama series airing Sunday nights on AMC relishes in the absurd and obscene. And if you can’t help but crack a smile, blame Gilgun’s cheeky delivery.

It helps that the actor has been cast in a role he seems born to play. Think Billy Idol if he were a blood-thirsty vampire but one blessedly free of the usually requisite vampire fangs. Gilgun, of course, finds the fun in all the other vampire perks, specifically getting ridiculously doused in gore.

“Blood and my character are like peas and carrots,” Gilgun says. “I’ll have to put the outfit on that I had the night before, and that was covered in cold, sticky (fake blood). It’s just like being covered in actual blood only it doesn’t smell of iron. It’s like minty.”

Adapted from the hyper-violent, 1990s comics created by writer Garth Ennis and artist Steve Dillon, “Preacher” took almost a decade to get made. Thanks to the nonstop persistence of Hollywood comedy darlings Evan Goldberg (writer of “Pineapple Express”) and actor Seth Rogen, “Preacher” was eventually delivered into the hands of writer-producer Sam Catlin of “Breaking Bad” fame. Together the trio finally christened “Preacher” with a pilot that crams humor, action and a pondering of the meaning of existence into a single hour of television.

Set in the no-horse town of Annville, Texas, the series follows the prodigal son turned village preacher Jessie Custer (Dominic Cooper) as he attempts to guide his meager flock into salvation. Jessie must head toward the light while avoiding job propositions from his ex-crime partner (and ex-girlfriend) Tulip (Ruth Negga) and the high jinks of one marooned vampire named Cassidy (Gilgun). Because of divine intervention (or pure happenstance), the preacher, the con and the vampire become entangled in a holy war.

Even the premise sounds like the start of a joke that lands with a biblical apocalypse twist. And AMC is hoping that the Frankensteined mashup of styles will keep the series unique.

“It’s so genre hopping,” executive producer Catlin says. “It can be a serious drama about the meaning of life, it can be a silly Monty Python-esque comedy, it can be a crazy-violent (Quentin) Tarantino (film). It’s a western. It has a lot of different tones to it that I haven’t seen before on TV.”

So how did “Preacher” find the balance between the silly and the serious? “There’s different treatments of violence,” Catlin explains. “On ‘Breaking Bad’ … if someone got punched on the nose, they would have a bloody nose. In a lot of ways, the violence in that show would hit harder than the violence we have on ‘Preacher.’ This is a world that has lost its moorings. It’s an embellishment of the violent American frontier spirit.”

Even Tulip, who in the comics at first is seen as “slightly timid,” and as Negga puts it, “quite fragile,” comes on strong in the AMC series. “When you first meet her,” Negga says of Tulip’s TV introduction, “it’s during this fight scene. We wanted to make immediate impact for the audience. And an immediate emotional connection.”

“She’s got a real problem with her temperament,” Catlin says. “I’m very excited about it. You don’t see angry women on TV very much.”

But even with the blood and rage, “Preacher’s” creators do have some limits.

“I originally scripted her as biting off the guy’s nose,” Catlin says of Tulip’s first fight scene. “And Seth and Evan said, ‘No, no, no, we did that before. It was too disgusting. It has to be an ear.’ Because for some reason the ear is less disturbing than the nose. And I think they were right.”

While the first episode of “Preacher” has three impressively choreographed fight scenes, Gilgun warns that things will cool off a bit.

“We can’t have enormous amounts of blood, terrible gore, every episode,” Gilgun says. “There’s nothing to look forward to in that sense. It’s like a spliff, like having a joint. If you smoke it all day long, endlessly, it’s just something you do. It’s not a treat anymore, is it?”

Gilgun applies the same dissection to pry open the mind of his 119-year-old character. “I know he’s funny, but he’s constantly being shot,” Gilgun says. “It’s agony. It’s the same pain as it is for a normal human being, (but) he’s got used to being shot. He’s got used to pulling bullets out. You think about it, get rid of the comical aspects of it, he’s a really sad man.”

Instead of living the “Interview with a Vampire” life of lace and luxury, Cassidy is broke and spends most of his time drinking away the minutes on his endless clock. We will witness the character struggle with the reality of his own absurd existence.

Will the genre splicing win over the modern-day TV audience? Will folks fall for the Irish vampire with great banter but a deeply twisted past? No one can say for sure, not even Catlin, who confesses that he may be looking for a job in a couple of months. But he does know that “Preacher” comes in strong. And with today’s television audiences, there’s really no other way you can introduce an idea this intricate. You gotta go big.

“There’s just been so much great, innovative television in the last 10 years that sort of the paved the way: ‘The Sopranos,’ ‘The Wire,’ ‘Mad Men,’ ‘Breaking Bad.’” Catlin says. “People took really big swings on those shows, and they paid off. Now audiences expect big swings. Audiences are so much more sophisticated and so much more … cynical is too pejorative a word, but they’ve seen a lot of great stuff. So it takes a lot to surprise them. I think AMC and Sony know that ‘Preacher’ is nothing if not a big swing.”

And if “Preacher” can make folks wince when a ridiculous vampire takes a bullet, perhaps it has a prayer of a chance with today’s audience.