UCLA students wait in barricaded classes, with cellphones and laptops their window to outside 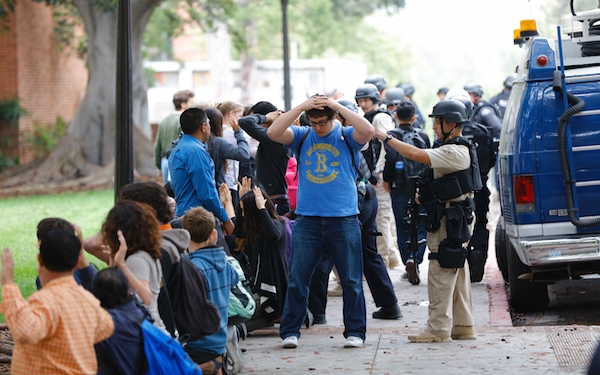 They hunkered down in classrooms, bathrooms and dormitories. They shoved makeshift barricades against classroom doors and armed themselves with crude weapons. They texted frantic family members and friends and took to social media. They avoided windows and doors. They whispered.

The alert had gone out Wednesday morning, the week before finals. An active shooter on UCLA’s campus.

At one point it seemed that hundreds of students were running.

Jason Naderi found himself rushing to the library with dozens of others.

The third-year biology major was among those who spent the time hunched over laptops and cellphones, monitoring the news and trying to learn what was happening beyond the walls.

“It’s just such an overwhelming situation,” Naderi told the Los Angeles Times. “You see these things on the news — and to have it come here?”

One student tweeted that she was hiding in a men’s restroom and attached a photo of the doors barricaded with a desk. Others posted on Snapchat — their photos showing how they had looped their belts around door hinges to prevent them from opening.

“For those concerned, I am safe on lockdown in a separate building on campus,” one young man wrote in a public Facebook post.

Inside a lab at the Botany Building, students grabbed what they could to use in their defense. A fire extinguisher, a few pairs of scissors, some rulers. They rolled a log in front of the doors.

“We had very limited resources,” said Jared Neutel, 22. “We just did everything we could to make sure that we were safe.”

Neutel created a group chat with his family, friends and girlfriend. He sent updates and soothing memos. Everything’s going to be OK.

But rumors were scattering across campus. Two shooters. No, four. The shooters were wearing police uniforms. They had assault rifles. Their targets included apartments. The misinformation mounted and was spread through texts and social media.

“I took the messages with a grain of salt,” said Eeman Khorramian, who kept tabs on his friends via social apps on his iPhone as he sat in a cubicle at the library in the Center for Health Sciences.

Denise Miresmaili hid out with classmates in the Math Sciences Building. They hid under their desks.

“Meanwhile, my brother is calling me, asking where I am, and I have all these notifications from group chats on my phone,” she said.

She also received messages — incorrect as it turned out — that the shooters were in her building.

“It was all very scary, especially since our door didn’t lock,” she said. A handful of students needed to use the restroom. The teacher’s assistant offered empty water bottles.

“So many of my friends from UCLA and from other colleges contacted me immediately to find out if I was safe,” she said. “It’s all so surreal.”

At Royce Hall, Chris Walker, 26, was with a few dozen English classmates debating what to do. The teacher had not arrived. They voted to stay put.

Students closed the shutters, turned off the lights and crouched underneath the windows. They propped open laptops, dimmed the screens and turned the volume low. They watched the media reports that showed police in tactical gear roaming their campus.

Walker recalled the YouTube tutorial he had watched on what to do during an active shooting. Like others across campus, he unbuckled his brown leather belt and tied it around the hinge of the door.

“We tried to stay calm,” he said later. “We were very democratic.”

Jared Rodriguez, 22, and about 30 other students locked themselves in a chemistry classroom and used a projector and desks to block the door. Most stayed quiet, checking Twitter for updates and sending messages to family that they were safe.

For those off campus, the wait for news was painful.

“I’m just worried about my friends,” said Ehsan Kumar, a freshman who quickly evacuated. Throughout the lockdown, he continuously peered across the street at Bunche Hall, where some of his friends remained.

“My dad is currently on lockdown in the basement where the shooting occurred,” wrote one woman on Facebook. “Send good vibes.”

On the third floor of Boelter Hall, more than 50 people filed into a massive lecture hall. They shoved a table and chairs against the doors, one of which didn’t lock. Most people stayed calm, said senior Saketh Kasibatla.

One girl sobbed. Another did her homework. Most sat on the steps on the edges of the room and exchanged notes on what was happening.

About noon, the group heard an ominous knock at the door. They tensed.

But from the other side came a familiar voice. Their professor. The campus was clear.