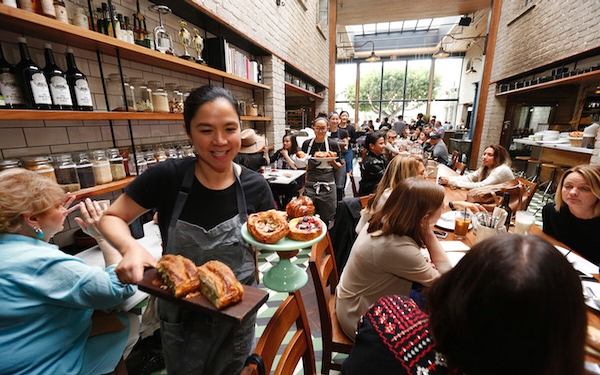 Margarita Manzke, pastry chef and co-owner of Republique, delivers a variety of pastries to Martha Stewart on May 10, 2016 in Los Angeles (Genaro Molina/ Los Angeles Times/TNS)

So on a recent May morning, Stewart planned a mini bakery tour of Los Angeles for some research and a little inspiration.

Her first stop: Gjusta, Travis Lett’s bakery palace in Venice. She walked up and down the bakery counter with her chin up and her Canon EOS M3 at the ready. In platform espadrilles, white leather pants, a black blouse and not a strand of her signature blond mane out of place, the 74-year-old seemed almost half a foot taller than most of the other patrons. Her entourage (a publicist, director of food development, director of special projects and a makeup artist) trailed close by.

Instead of actually staring, some of the diners and employees used the side-eye I-see-a-celebrity spy technique — too cool to actually gawk at a celeb. This is Venice, after all.

“Those croissants are beautiful,” Stewart said, pointing out the baklava croissants to her director of food development, Thomas Joseph, who has worked with Stewart for the last eight years. The two often travel around the world sampling bakeries and restaurants and doing research for the PBS show, in which Stewart develops recipes for everything from her favorite — the Breton pastry kouign-amann — to pizza dough.

“We’re focusing on regional American baking that’s kind of unusual,” Stewart said of the upcoming season. “We’re testing all kinds of recipes right now. One is a mashed potato pie. Not good.”

She and Joseph casually walked behind the counter for an impromptu tour, and Stewart proceeded to inspect the ovens, the flour and anything that caught her eye. Then she made her way outside to a communal table to begin a feast.

Plate after plate was brought to the table: an assortment of smoked fish, a bagel, a brioche doughnut, another baklava croissant, baguette with butter and cheese, a slice of carrot cake, a cinnamon roll and babka.

Stewart’s must-try items at all bakeries: croissants, kouign-amanns and baguettes.

And in case you’re wondering, when it’s appropriate, Stewart eats with her fingers. And she’ll expect you to do the same.

She tore into the bagel (she prefers poppy seed), took a big bite of the carrot cake, ripped open the baguette, added cheese, dissected the babka and slathered half a croissant with butter before digging in. As she did this, she added running commentary on the flour, the butter, the texture and the presentation of each item.

“We’re still developing content for the show,” Stewart said. “We’re finding all of these old, forgotten recipes that you really don’t hear about anymore. They are a little wild and wacky, but really fun. Like the crunch cake from San Francisco.”

Stewart was referring to the crunch cake at Blum’s, a version of which she’s developing for the show.

After discussing her affinity for pastries in Korea (“maybe it’s the ingredients, the water or something”), Stewart decided she was ready for her next bakery. But before she got up from the table, she loaded a baguette with butter and cheese and wrapped up the sandwich in a paper menu.

“This is for my driver,” said Stewart, who cruises L.A. in a black Chevy Suburban. “My driver gets the best things.”

On her way out of the restaurant, she paused at the counter to look at a diner’s salad. If Stewart likes the look of what you’re eating, she’ll ask if she can take a photo. And because it’s Martha Stewart, you say yes, as did the guy with the pretty salad.

At Milo and Olive, pastry chef Zoe Nathan and husband Josh Loeb’s bakery and restaurant in Santa Monica, Stewart repeated her routine and inspected all of the pastries, took photos and asked Nathan for a tour of the kitchen. When Stewart was done, she was presented with a kouign-amann, baguette, scone, sour cherry crostada and a slice of lemon meringue pie. There also was a pizza, a bowl of housemade pasta with bolognese and the restaurant’s famous garlic knot.

She and Joseph took the kind of bites that didn’t let on that this was their second meal in 48 minutes, then contemplated the ingredients.

“What do you think the meringue is made out of?” she asked him. “Maybe they use some sort of stabilizer,” he said. (They don’t.)

“Is that a pate brisee?” she said, pointing to another item.

When she left, she took a box full of pizza for her driver.

At Republique, Margarita and Walter Manzke’s French restaurant and bakery on La Brea Avenue, Stewart sat at one of the long communal tables in the dining room and swooned, as do most Angelenos, over one of Margarita’s baguettes. She broke off a big piece of bread, added some butter and closed her eyes as she ate it.

“This tastes like what I used to make,” Stewart said. “This tastes just like my bread. It has exactly the same taste.”

Manzke and her staff brought over what seemed like five platters of pastries full of kouign-amann, raspberry kouign-amann, knotted pastry with sticky caramel, peach and mulberry brioche, two bowls of doughnuts, pavlova and a slice of the salted caramel chocolate cake. A crowd of people from the kitchen giggled and huddled around Stewart’s table.

She picked the mulberries off the brioche, amazed at the availability of the fresh fruit, and devoured the kouign-amann.

“Their kouign-amann is better than the last one,” Stewart said. “It tastes like ours.”

Stewart said she and her team of four recipe testers spent hours testing a kouign-amann recipe for the show before deciding on one she liked.

“I’m amazed at how many good, high-quality bakeries there are here,” she said. “It’s extraordinary — taking good advantage of what’s local and making things that are delicious and fresh. Those are mulberries. You never get to have mulberries in anything.”

“Everything in L.A. is with a twist, which is nice. It shows great creativity,” she added.

“I think La Brea Bakery really started it. I remember eating fabulous bread in San Francisco at ACME and thinking, ‘Oh, there can’t be anything better than ACME,’ then I tasted Nancy Silverton’s and now tasting some of these wonderful offshoots.”

As she walked through the crowded dining room back to her car, a few people asked to take selfies, and Stewart happily obliged — after three and a half hours and two dozen breads and pastries, still not a hair out of place.

Special Features
We tried more than 25 alternative proteins. These were the best (and worst)
966 views