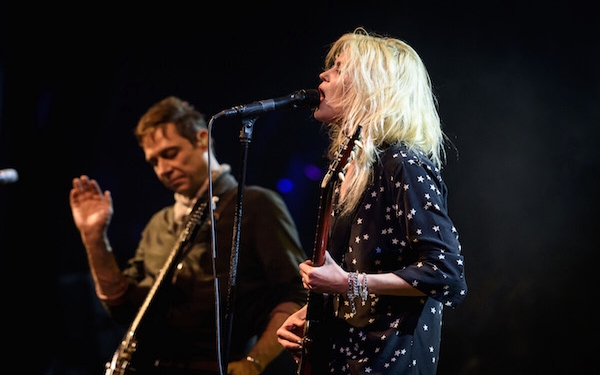 Once upon a time, the sight of Alison Mosshart kicking over an electric fan would have registered as pure rock ‘n’ roll theater.

And, sure enough, when the live-wire frontwoman of the Kills used a thigh-high leather boot to lay into one at April’s Coachella Valley Music and Arts Festival, the moment had some undeniable electricity. It was precisely the kind of charge that’s established this scowling blues-punk duo — singer Mosshart and guitarist Jamie Hince — as one of rock’s most exciting live acts.

A few days after the performance, though, Mosshart insisted she was simply managing a situation with the tools at hand.

“There were already 30 mile per hour winds,” the singer recalled of the band’s Coachella gig, which began just as a dry desert storm whipped across the dusty festival grounds. “Then there’s this fan blowing at me?” She laughed. “It had to go.”

You can detect that sort of down-to-earth realism on the Kills’ surprising new album, “Ash & Ice,” the act’s first since 2011 and fifth overall.

After years spent carefully tailoring an intimidating, almost untouchable vibe — one modeled on style-conscious groups like the Cramps and Nick Cave’s Bad Seeds — the record presents a relatively lifelike vision of the Kills, with a richer sound and more relatable emotions.

“When we started out, we had this attitude that if it was lambs to the slaughter, then we weren’t gonna be the lambs,” said Hince, a Londoner, as he and Mosshart, who grew up in Florida, split a bottle of rose at the Sunset Marquis in West Hollywood. “The listener was gonna be the lamb.”

But this time the duo slightly softened its attack.

The songs are welcoming, not forbidding, sensual rather than brutal.

“I need you / Don’t ask me why it is,” Mosshart sings in the funky “Heart of a Dog,” “I want strings attached / Unnatural as it feels.” Later, over stripped-down electric guitar in “Hum for Your Buzz,” she confesses: “I’m looking for answers to my wishes and my prayers.”

“We talked about the lyrics a lot,” the singer said. “We wanted to do what we’re totally uncomfortable with, which is to try to be clear and say what we feel.”

The shift came as a result of the band’s confidence, according to Mosshart, who formed the Kills with Hince around 2000, not long after the two met while she was touring Europe with an earlier group.

“We used to be really precious about our identity,” she said. “We weren’t allowing anyone else to define us. But I’m not worried about that now. At this point, our identity is completely defined, and I think that gives you a freedom.”

Yet the album also reflects a newfound vulnerability that seems attributed to two events in Hince’s personal life: his recent split from his wife, model Kate Moss, and a hand injury that threatened his ability to play guitar. They combined to inspire Hince to “make a record that was soulful, that kind of opened up and spoke to people,” he said.

With a chuckle, he added: “I wanted to find something that wasn’t just about growing your hair to scare the teacher.”

He found it in Los Angeles, where the two wrote and recorded much of “Ash & Ice” in a rented house they shared with their engineer and his wife and 2-year-old daughter. “If I was ever stuck on a lyric, I’d just play dinosaurs with her for a couple of hours,” Mosshart said, referring to the daughter.

Mosshart and Hince had resisted L.A., about which they admitted to believing the usual cliches. They recorded 2008’s “Midnight Boom” and 2011’s “Blood Pressures” in an isolated studio in Benton Harbor, Mich. — a “punishing” environment, as Hince described it, that led to music with little warmth.

But knowing they were in search of a different experience brought them to L.A., Mosshart said. Now she’s convinced there’s “something super-magical and dreamy and dark and twisted and awesome about this place.”

Indeed, shades of those qualities — they basically form the recipe for Fleetwood Mac — crop up throughout “Ash & Ice,” as in the creepy but luscious “Hard Habit to Break” and “Echo Home,” a pretty ballad with tender harmony vocals. There’s also “Siberian Nights,” which comes on like a frigid memory defrosted by new possibility.

Beyond the fresh surroundings, the record’s sound was influenced by Hince’s hand, which he had injured when he accidentally slammed it in a car door. It took time to learn to play again, he said — and to do so using novel arrangements of fingers that no longer move the way they once did. (Mosshart spent Hince’s recuperation painting and working with her other band, the Dead Weather.)

“I could’ve done it if it was fun, but it was excruciatingly painful,” he said. “And the increments of improvement were so invisible.” Remembering the experience, he echoed his bandmate’s reaction to that unwanted fan.

“The work I was putting into trying to rehabilitate my hand was disproportionate to the urgency of what I have to do with my life,” he said. “I just thought, ‘I’ve gotta get on with it.’”