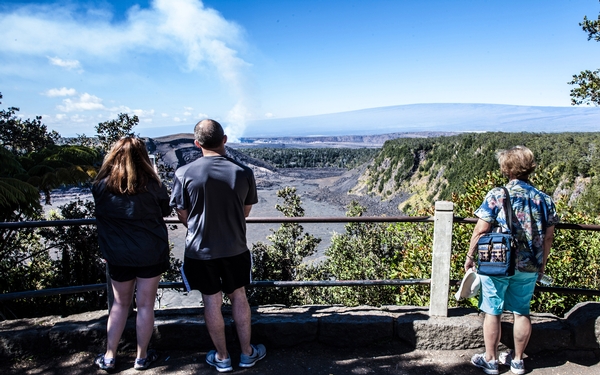 You wouldn’t think that a mellow town such as Hilo, a Hawaiian-style community — and the rainiest place in Hawaii — could brag on much in the way of passion and betrayal. But that’s what the movie director, the one I bumped into at a film festival party, said he wanted.

“How about a story set in a small town where everyone has a secret,” he said, handing me a glass of wine. “Set it in Hawaii, since you’re going there. But no guidebook stuff. I want a red-hot drama, a battle of the emotions, a tale of anger, jealousy, guilt. A story that’ll tear at your gut. Add a natural disaster and a has-been actor and I’ll read it.”

Script writing was the last thing on my mind as I listened to him talk. But I was taking my kids to Volcanoes National Park, on Hawaii’s Big Island, where molten lava has been engulfing homes, torching forests and mesmerizing onlookers since 1983. Would that be red-hot enough for Mr. Director (who asked that I not use his name)?

The weather in Hilo, the driest in a decade, according to the television, was sunny all day, every day. A good sign, indeed. But more important was ensuring that our long-planned family trip would be a sizzler, engaging and entertaining little minds.

To that end I booked a Volcano Discovery tour and a zip line day with Kapohokine Adventures, a Hilo-based outfitter recommended by a friend.

“You won’t be sorry,” he raved. “The guides are exceptional. They know everything that’s ever happened. They kept our teenagers enthralled all day.”

As it happens, Hilo is close to both the ocean and the volcanoes — killer surfing and Kilauea hot spots — so we stayed in town at the Hilo Hawaiian Hotel overlooking Hilo Bay. It was here, in A.D. 1100, that the first wave of Polynesian voyagers reached the island, settling near the Wailuku River.

That was the village center then and it still is, comfortably old-fashioned with its rustic last-century store fronts, narrow streets, curious galleries, mom-and-pop shops, first-rate restaurants and the occasional newcomer, including Kapohokine Adventures.

Like most zip lines, Kopohokine’s is built on open land past a macadamia nut orchard, on a long downward slope next to the Hilo Forest Reserve. As expected, aerial views of gorges and waterfalls are guaranteed. But this is no ordinary zip line.

Installed with not one but two cables on each of the eight segments, it’s a fly-away built for two. Lovers can soar in tandem; mothers and daughters buddy up; sportsmen play the links game, racing each other down the lines.

Typically, you ride the first four links before noon, the second four later, and take a lunch break midway for a barbecue or sandwiches. If you’re interested, an introduction to Hawaiian culture and a cooling swim in a waterfall pool is available, a bonus activity pioneered by co-owner Gary Marrow.

“The tours began when we noticed that cruise passengers needed someone to pick them up at the dock and show them the real Hilo,” said Marrow. “We started with one van and when that wasn’t enough we bought another one. Now we have 10 new vans and 90 full- and part-time employees. Finally we bought the land and decided to build the zip line.”

It was at this moment that I recognized the makings of a Hollywood-style drama. Not that Marrow, who resembles Leonardo DiCaprio, is a “has-been actor” exactly, but sort of. Before moving to Hawaii he dabbled in film, eventually nailing a job as a stand-in for DiCaprio in the film “Titanic.”

“It took a year to make the movie, enough time to get to know Leo and the cast pretty well and to see how movie-making works,” he said. “I spent a lot of time shivering in that giant water tank they used for the ocean scenes, but they paid pretty well. I looked for another gig after it ended, but then we decided to come out here.”

But there was more drama to come on our Volcano Discovery tour, scheduled for the next day with Kapohokine guide Rich Berner. An amateur geologist and National Park volunteer, Berner is also a lettuce farmer, intrepid historian, Hilo resident and a relentless encyclopedia. Ten minutes into the tour, I knew we’d struck gold.

Heading along the coast, we looked at lava-damaged houses, though nearby telephone poles, wrapped in metal sheets, survived. So did the quaint Star of the Sea Painted Church, a cultural icon built in 1928, saved when a band of heroes scrambled to move it away from the advancing lava in 1990.

On the once-sandy beach at Kalapana, now a lava sheet to the ocean, Berner pointed out thousands of palm fronds pushing up through the cracks, a testament to indomitable life, re-greening the Big Island as it always does.

Stopping at the Hilo Bay waterfront, we watched the surf crashing on the breakwater as Berner talked about Hilo’s worst two natural disasters, tsunamis that roared across the bay in 1946 and in 1960. The first tsunami swept ashore with 45-foot-high waves that engulfed the town, killing 161 people and destroying whole blocks of buildings. The second tsunami, partially slowed by a newly built breakwater, flooded parks, streets and shops and despite an advance warning system, killed another 60 residents.

Returning to Volcanoes National Park we drove around the Kilauea Caldera on the Crater Rim Road, stopping at view points on the way to the Thurston Lava Tube, a classic example of lava geology. The tube, 12 feet in diameter and about 100 yards long, is dimly lit, enough to feel spooky when you’re in it.

You could walk through the thing in 10 minutes. But Berner lingered, showing us colored minerals that had leached from the inside wall and how a tube was formed when the lava flow’s exterior edge cooled and hardened but the boiling hot center stayed liquid enough to flow out and away.

After lunch, we hiked the four-mile loop trail into Kailauea Iki crater, hard rock now but a fiery fountain when it erupted in 1959. Walking along the crater floor was safe but strange, knowing that hot magma was deep underneath.

As darkness fell, we lagged, thinking of dinner. But Berner wouldn’t quit until we’d seen the science exhibits in the Jagger Museum and found the sweet spot on the rim where everyone gathers to watch the smoke and steam rise from the boiling lava in Halema’uma’u Crater.

But the story of Hilo’s least known drama, “Bloody Monday,” was still to come. After the first Christian missionaries converted the Hawaiians, they educated the few who didn’t die of measles, married them and raised families, amassed huge sugar cane plantations and imported Chinese and Japanese to work the fields. Then things went awry.

Peace-loving Hawaiians everywhere were shocked. But with World War II looming, Bloody Monday was forgotten. Will a fiery drama save this piece of history? With the right writer (not me), it might. We’ll need Leonardo DiCaprio playing the handsome but greedy plantation owner, Gary Marrow as the stand-in, Gina Rodriquez (from “Jane the Virgin”) as the winsome Hawaiian girl and Rich Berner checking facts. And filmed in Hilo, of course.

For Kapohokine Adventures tours, prices and itineraries, see www.kapohokine.com. Or email info@kapohokine.com. Visit the office in Hilo at 224 Kamehameha Ave, #106 until August 2016, and when they move to the Hilton Hotel on Banyan Drive. Or call (808)964-1000. For more about Hilo and Hawaii, go to www.gohawaii.com/hilo.