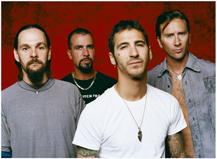 Godsmack IV debuted at number one on the Billboard 200 charts. This marks the second time the members of Godsmack have accomplished such a feat. So how do they do it? Is there some rhyme or reason to the band's success?

Vocalist Sully Erna and drummer Shannon Larkin explain that the succession of events that formulated the highly anticipated new disc progressed exceedingly differently than it did from previous offerings.

“Sully was having a bunch of personal problems, issues with his relationship, addiction … so he had to step away, and when we went to start writing the new record – we had written a few songs while on tour with Metallica so we had a head start – when it came down to everybody getting together in a room he just didn't show up for a month, like once a week maybe,” says Larkin.

With the issues in Erna's life continuing to ensue, he, for the first time was forced to release the reigns a bit and let the other band members take control of the album.

“He's always a total control freak with this band. Godsmack is Sully. This time he let go a little bit and let us write and as a result, we came up with 38 songs or something out of which he picked four or five for the new record, the first single “Speak” being one of them. Once that was done, he started doing the lyrics and he kind of came out of his funk, he dealt with the problems that he had,” says Larkin.

He shares that with the floodgates reopened, the band was able to write again.

“[Erna] basically came clean with his girlfriend and told her he cheated on her. He cleansed that out of his life and they're doing well. The drinking thing, he got control of that and quit drinking for almost a year, wouldn't even drink a beer. Now he's at the point where he can have a couple beers and not have to be all fucked up and make an ass out of himself,” Larkin says.

“The thing about Sully is he's strong and can better himself as a person. And we're getting older. It's not fun to wake up with a trashed hotel room and bloody hands with your head throbbing and thinking I'll never drink again, it's no fun. It used to be very fun.”

“We've never been the kind of band that has claimed to change the face of music and all that stuff, we just try to write the best music that we can for that moment in our lives,” he says. “We're a little bit older, a little bit more mature. A little bit more rock than metal.”

The tunes are sure classics. “Voodoo Too” was a completely accidental reference to “Voodoo” off the debut Godsmack album. “That song wrote itself,” Erna says. “I was blabbing lyrics, blabbing through the melodies, and the vowels of ‘Voodoo Too' kept coming out. I needed that vowel to complete the chorus. I did everything in my power to deter it the other way. I really made a conscious effort to not call it ‘Voodoo Too.'

“I didn't want people to think we wrote a sequel because lyrically there is no connection. Instead of fighting it, I just let it happen. The people who heard it thought it was really special sounding. Because I knew it was going to be a ‘Voodoo' also, I put some little hidden Easter eggs in there that kinda take you back to the first one.”