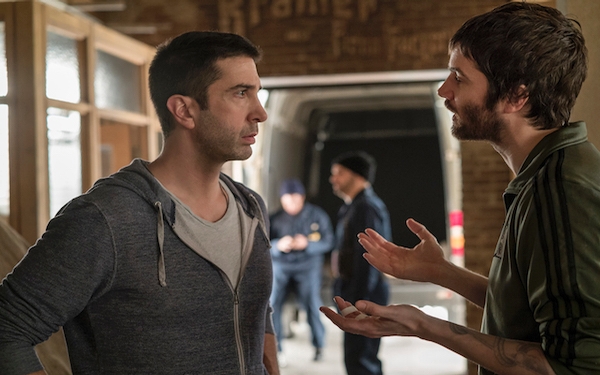 You knew him as Ross of “Friends,” the voice of the neurotic giraffe from the “Madagascar” series and, more recently, as a Kardashian (Robert, not Kim) in “The People v. O.J. Simpson: American Crime Story” miniseries. Now David Schwimmer is embarking on his first recurring television role in more than a decade with AMC’s gritty new series “Feed the Beast.”

A crime drama set in the Bronx, Schwimmer plays a widowed father and former restaurant owner/wine sommelier who’s suddenly caught in the middle of an organized crime ring. His life and his son’s depend on erecting a new establishment that’s a financial success, though he must first overcome his own painful history.

Schwimmer, 49, spoke with The Times about returning to series TV, becoming a father and the soft spot he now has for Robert Kardashian.

What made you want to take on the role of a grieving, alcoholic single father in “Feed the Beast”?  Really, my heart just went out to the guy. Tommy’s a single parent raising a mixed race, 11-year-old boy, and they both survived this horrible tragedy of losing the love of his life and his boy’s mother. The boy hasn’t spoken in a year since witnessing his mother being killed. I was attracted to the role of being a father because now I am one. I haven’t really had the opportunity to play a dad since I’ve become one, except very briefly as Kardashian in the O.J. thing, but this explores that in much more depth.

AMC is now synonymous with two of the decade’s most celebrated series: “Mad Men” and “Breaking Bad.” The bar is pretty high. Any pressure?  While this show is unique because of the whole cooking aspect and getting a restaurant on its feet, it is a one-hour drama in the traditional sense of “Mad Men” and “Breaking Bad.” It is character-driven, there’s a crime aspect, and dark comedy comes out of it. It’s just going to be a question of getting eyeballs on it, because there’s so much to choose from now.

Are you a foodie?  I actually just had this conversation with a writer from Food & Wine. I asked her what qualifies a person to be a foodie? I told her pointedly, ‘I am not a person who will fly to a city or country just to try a restaurant, so if that’s the definition of a foodie then I can’t say that I am one.’ She then asked, ‘Once you arrive in a city, do you immediately seek out the most interesting restaurant in the city?’ I said, yeah, and then she said, ‘You’re a foodie.’ That was proof, I guess, I am a foodie.

What were the challenges of playing Kardashian, or at least playing him empathetically?  I tried not to have any preconceptions about who he was. I was trying to excavate who this man was. All I knew when I was watching the trial, it was always like, who is this white guy sitting next to O.J. the entire time? He was on the defense team but I didn’t get what he did — I mean, he wasn’t cross-examining anyone. And all the other egos in the room overshadowed him. The attention was on the flashier players. Kardashian seemed to be this private, modest, quiet player that I wanted to know more about.

Since “Friends” ended in 2004, you’ve done film, theater, TV cameos and directed. Where do you feel most at home?  I feel equally comfortable on stage as I do in television or film. I don’t really have a strategy. Maybe if I did I’d be a much bigger film actor or star, I don’t know. I go with my gut when I read material — sometimes it’s a film, a play, a cameo, a television series. I’ve always thought of this career as a very, very long one. I hope to be doing it until I can no longer see, walk, whatever. Maybe even then I’ll be able to take a role — “Scent of a Woman 2.”

The success of “Friends” has been a blessing and a curse.  It’s a paradox for sure. On one hand, I’m typecast, or there is the danger of being seen or believed as that one character. On the other hand, it was a piece of pop culture and television history, and it provided financial security. For any actor or artist, financial stability is a huge blessing. It gives you the freedom to choose and not have to take a job because you have to pay the rent or pay health insurance. There’s not a day that goes by that I’m not grateful.

Have you noticed that since “Friends” was released on Netflix it’s now resonating with millennials?  I’ve noticed. It’s really lovely to think it’s appealing to a new generation. My daughter’s 5 — will it still appeal in a decade? I’m sure my daughter or her friends will be more than happy to tell me when they get there.

“Feed the Beast” is your first return to a TV series since “Friends.” So you once again get to develop a character with a potentially long arc.  Right, fingers crossed the show is picked up for another season. I’ve always been fascinated by the job of a wine sommelier. Like what kind of person becomes a somme? What I learned from one of my close friends here in the city who is a top somme is that there is no one path. It was fun to invent Tommy’s back story and figure out what his journey was from the streets of Queens to this job.

He’s so troubled, it’s impossible to reconcile with the voice of Melman the goofy giraffe from “Madagascar.”  First, I’m really thrilled to hear that, and I hope others have a similar experience where they can watch this new guy that I’m trying to create. I’m also highly aware that there will be some people who will not be able to distinguish that this is a different character. It’s OK. It’s happened my entire career. Even when I did “Band of Brothers,” or “The Iceman,” it’s like, ‘Oh, that’s Ross in World War II!’ Or whatever they want to say.