Q&A: Ho, hey, Lumineers, whatcha been up to lately? 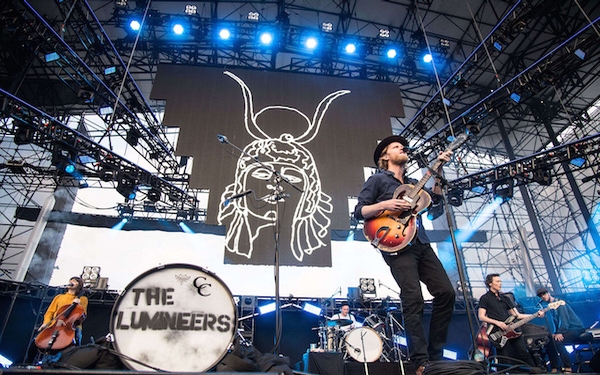 The Lumineers perform on May 14, 2016 at Irvine Meadows Amphitheatre in Los Angeles. (Amy Harris/Rex Shutterstock/ZUma Press/TNS)

The Lumineers released their sophomore record, Cleopatra — which the New York Times touted as “a valiant turn inward” — in April. Now, they’re on the road with both new music and with familiar favorites, like the breakthrough hit “Ho Hey,” from their self-titled debut album.

In a phone interview, Lumineers cellist and backing vocalist Neyla Pekarek shared what she and vocalist/guitarist Wesley Schultz and drummer/pianist Jeremiah Fraites have been up to since their first album dropped in 2012 and about the challenge Cleopatra posed after the whirlwind of instant fame and its consequences.

You waited four years to record a second album. Why so long?

Our first record, or our rise as a band, happened so fast, and there was so much demand that we were actually on tour during the majority of that time. We left for South by Southwest (music festival in Austin, Texas) in 2012, and we didn’t really stop touring until December of 2014. And then the album took the next six months to write and a couple of months to record in 2015. So it seems like it took four years to make an album, but it really only took about six months.

Did you feel any pressure while recording “Cleopatra,” after the huge success of your first album?

For me, I felt like the first album had so much pressure because, at that point in our lives, we were putting all our eggs in one basket, taking a gamble on ourselves by quitting our side jobs. And a lot of people were discouraging us, telling us we were crazy.

It was a risk — we were going into debt by doing this.

So the fact that we have a career a little bit under our feet this time, and our fans waiting for music, that was amazing. But I think there was a bit of pressure going into it just because the first record was such a big smash.

Schultz and Fraites’ work always feels so personal and emotional. What was the inspiration for “Cleopatra”?

It is pretty personal. I think Wes comes from a place of wanting to tell a good story. The (songs) come from a specific place, but the cool thing about music is the fans interpret it in their own way and make their own story out of it, which I think is more or less his goal. He’s a pretty private person, so I don’t think it’s the goal to just (share) personal stories.

In “Cleopatra,” Schultz’s lyrics often challenge or subvert gender roles, empathizing with the female side of the narrative. What’s it like to be in a band that has this almost gender-fluid voice?

I don’t think it’s something intentional, and that’s a really interesting outlook on it. I do know that a lot of decisions were made, as far as sonically, just having a lot of male voices as opposed to female voices on it — more of this idea of brothers-in-arms and sailors. There’s a lot of male backing vocals on it for that reason.

Colorado isn’t a huge hub for music, like New York or Nashville. Why have you settled there, and what does Denver give you that leading cities for music might not provide?

I think for musicians that are starting out, the one thing I would say is, don’t go to those cities. Ideally, as a musician, you have to tour, and you should go to those cities on tour. But I think the idea is to be mobile, and in order to do that, it’s important to live in a cheap place that’s affordable.

You were planning to become a teacher when you responded to Schultz and Fraites’ Craigslist ad. Do you still want to teach in the future?

Teaching was my passion. I really loved it. I’m still very passionate about education, and when time allows, I’d like to pursue that again in some form.

What was it like to join the band in 2010, after they’d already been together for almost a decade?

It was with a lot of sensitivity. I wasn’t really looking to be in a band. I had never been in a band before. To me at first, it just felt like something to pass the time. And it ended up just being really fun, and we had a really good dynamic together.

But I think I was pretty wary about not overstepping boundaries, because they did already have this established thing between them. A lot of times, a cello is a support instrument, so I think entering the band as a cello player, that was sort of the role that I anticipated.