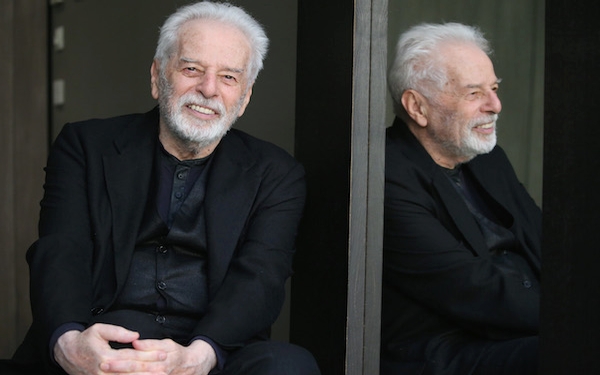 Alejandro Jodorowsky poses for a portrait on May 14, 2016 at the 69th annual Cannes Film Festival in Cannes, France. (Sebastien Botella/Maxppp/Zuma Press/TNS)

At 87, Alejandro Jodorowsky might be expected to take it easy.

Having essentially created the midnight movie with “El Topo,” launched a quasi-religion known as psychomagic, worked on a variety of intriguing aborted projects and even made a triumphant return with 2013’s “The Dance of Reality,” the Chilean-born hyphenate could easily have rested on his laurels.

Or, you know, spent his days writing comics and meeting with Kanye West, as he did not long ago.

Yet it turns out Jodorowsky is approaching his senior years with the same non-sequiturish gusto he did in many of his earlier phases.

At the recent Cannes Film Festival, Jodorowsky debuted his new film, “Endless Poetry.” As with “Dance,” the movie is a whimsical rendering of its director’s own autobiography, the second of a planned five films that trace his development as an artist.

“Age is an illusion. In America, they don’t want to think about getting old,” Jodorowsky said one afternoon in a hotel suite at Cannes, dressed in his usual bespoke manner and with his signature white beard. “In reality, you are the same always. My exterior changed. That’s it.”

He offered his solution for keeping a youthful mind set: “I never look in the mirror.” Then he added, for no easily discernible reason, “Sexually, I have a woman 45 years younger (wife Pascale Montandon). I can keep her satisfied.” The key, he added, is “I think of her pleasure, not my pleasure.”

Joy of another kind (mostly) marks his latest movie. The dramatized and often Fellini-esque film, with a wall-breaking intro from the director himself, picks up where “Reality” left off. The young Alejandro (played by the director’s 46-year-old son, Adan), angers his father by saying he wants to be a poet.

What follows, then, in the Spanish-language (or, perhaps, Jodo-language) picture is a series of loosely connected adventures around Santiago, Chile, circa the mid-20th century. The on-screen Alejandro, through his 20s, struggles to figure out his identity, consorting with a host of artists, navigating the bohemian Cafe Iris and with the red-wigged seductress Stella (Pamela Flores).

It is a trajectory filled with many of the surrealist Jodorowsky flourishes: spontaneous singing, random dwarfs, all-around weirdness.

“A literary editor once said to me, ‘In order for you to grow (in popularity) they need to know you,’” Jodorowsky recalled. “And I said to myself, ‘You’re right.’ Why was I creating stories that were the mask of the history of my life when I could make my history?”

He wrote “The Dance of Reality” as a graphic memoir in 2001, with several more works of camouflaged confession following. That exposure perhaps reaches its zenith with “Endless Poetry,” as it follows a young man caught between his own murky ambition and his family’s unambiguous expectation, a dilemma in which he says he found himself.

Long an auteur of the absurd, Jodorowsky showed an early, intense interest in the circus and performance art. In his early 20s, alienated from his family and seeking broader horizons, he moved from Chile to Paris, then to Mexico to study and practice various performance crafts. (He would shuttle between Paris and Mexico for years; for the past decades, he has lived primarily in France.)

Along the way, he helped launch the so-called Panic Movement, wrote and directed a wide range of plays, inaugurated a set of spiritual-behaviorist practices, penned a number of graphic novels and other illustrated works and, of course, directed films.

His first movie was the provocative “Fando y Lis” in 1967, which he followed with the career-making “El Topo,” an acid western that solidified his fantastical, comic and at times violent style.

Over the decades that followed, his movies would sometimes tend toward the kind of personal works that solidified his cult status (1973’s “The Holy Mountain”) as well as misbegotten commercial projects with which he has expressed frustration (1990’s “The Rainbow Thief”).

His philosophy was, and remains, that the line between truth and absurdism is thin. The latter, far from cloaking the former, can help reveal it.

“Reality is an illusion. Art needs to find the illusion and have the joy to exist,” he said, in his own crypto-logical way.

In some ways, the magical morbidity that fills Jodorowsky’s pictures — skeletons are a big theme in “Poetry” too — are not so much an escape from his humble beginnings as an ode to them, a kind of caricaturish working-out of bad memories.

And while viewers might wonder how some of his more Surrealist touches are true to anyone’s life, Jodorowsky disagrees. Often they stand in for real fears and hopes. Sometimes, he says, they’re even literal representations.

“You see dwarfs in my movies and you say, ‘How could there be dwarfs?’ But there were mines when I was growing up, and people lost limbs or had birth defects because of them. Dwarfs were real.”

Among the filmmaker’s greatest pop-culture innovations was the midnight movie. When “El Topo” first arrived in theaters (after making a splash at Cannes, in 1971), it was poorly received.

But that was far from the last word. The film’s blood-dark comedy helped it become a word-of-mouth sensation. Soon it was discovered by John Lennon and Yoko Ono, who loved the film and encouraged attendance. (“For some reason, I always appeal to the rock stars,” Jodorowsky said, almost wistfully. “Kanye West came to see me and said, ‘Read my Tarot.’ I don’t know why Kanye came. But I did it.”)

Theater owners were soon booking packed midnight screenings for “El Topo,” and the film became one of the first late-night cinematic events. If you’ve passed your local multiplex and seen teenagers lining up for “Paranormal Activity 33,” the phenomenon owes a huge debt to Jodorowsky.

Ditto for a number of modern filmmakers: Nicolas Winding Refn, whose upcoming Amazon movie “Neon Demon” caused its own stir at Cannes, cites the director as his one true influence; many genre practitioners of dark or whimsical comedy are channeling Jodorowsky without even realizing they’re channeling Jodorowsky.

Cult director is not a mantle most young artists seek out, however.

Partly as the result of his own dogged vision, partly as the result of some bad industry luck, Jodorowsky has had an unusually large share of commercial disappointments. A feud with the polarizing late Beatles and Rolling Stones manager Allen Klein resulted in some of his films failing to gain distribution exposure.

“There’s such a thing as the industrial picture. And like all industries, there’s only one goal: to make money. When the goal of the work is to make money, you have the life of one week. This one picture is … but it made money for one week, so it’s a success. When you love movies, when it’s an art, the life is 50 years.”

His own work, he said, has been guided by that north star, a beacon of essentially following a muse far from audience expectation.

“There’s no place in art we can’t go, unlike industrial art where they can’t go places because they’ll lose people. And I always answer immediately, ‘Why worry about that?’”

Even the current superhero focus on darker themes is, he believes, motivated by financial interests. “Everything you do, if you’re an industry — the stars, the story, the action — is to make money. When you try to make art, it’s different. You don’t want to show antiheroes. You want to show human beings.”

He said that he will continue trying to do that with upcoming work. He is helped in this by a following, accumulated over many years and powered these days by social media, that validates his approach. (“I have 1,200,000 (Twitter) followers,” the director said with a hint of satisfaction.)

He is raising money for the third film, which will trace his move to Paris in 1952 and the time there, while the fourth will focus on his subsequent time in Mexico.

And the last film?

“It will be about how I have a wife who’s 45 years younger than me and I can still satisfy her.”