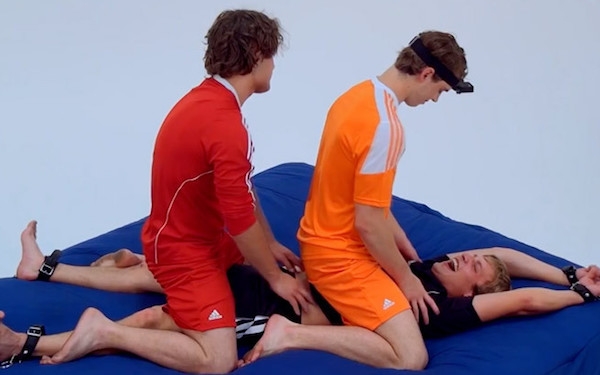 It’s easy to forget what kind of strange madness goes on in the random dark corners of the world. Sickness. Death. Tickling. Yes—tickling. I know, it’s completely out of left field, but my guess is that you have zero idea that some sicko out there is using tickling as the basis for reaping absurd amounts of power and ultimately destroying lives. Well, thanks to David Farrier and Dylan Reeve’s new doc Tickled, you’re about to have more than just an idea. You’re gonna have an experience.

This whole charade began when New Zealand pop culture reporter David Farrier clicked on a link and saw a silly video of a bunch of athletic men clad in brightly colored Adidas sportswear tickling each other. Since it’s kind of his thing to cover the outlandish and offbeat side of culture, he obviously had to find out exactly what was going on. What he found was that these men were taking part in Competitive Endurance Tickling (CET) and the company hosting the sport was a legitimate-enough-sounding Jane O’Brien Media.

Farrier figured that finding out more about the strange phenomenon would be as simple as posting on their rather popular Facebook page to request an interview. The response he got from Jane’s people, however, was anything but. In fact, it was insulting and contemptuous, and ultimately even more titillating.

While Farrier could’ve been hurt by their representative’s jabs at his homosexuality and heritage, using cute derogative phrases such as “Little Gay Kiwi,” that unwarranted fume of hate signaled a huge red flag to Farrier warning that something wasn't quite right. So, he decided to bring in his computer nerd friend Reeve to figure out what the flipping hell is CET and why the flipping hell the people behind it are now threatening their lives and livelihoods just for trying to find out more about it.

What ensues is like a dark, twisted, droll take on Catfish, but one that is set in such a far off niche frame of mind and space that you nor the directors know if they’re being screwed with. The amount of menace, fetishism, the amount of sheer time and manipulative energy put in to this world is almost incomprehensible, and that’s why Farrier and Reeve’s findings often become tragic.

I say tragic because, unbeknownst to you, there are young men out there all over the globe whose lives are being derailed because of CET and the megalomaniacs behind it. When the directors of the doc attempted to get what they thought was a simple interview with any of the participants, what they and we realize is that this is a human rights issue. When a person refuses to convey opinion on a matter due to fear of the repercussions of such a testimony, that is oppression, even if its concerning tickling—a phrase I never thought I’d say in earnest.

But while all this wacky darkness is being revealed to us, Tickled still holds a tinge  of lightness, thanks to the freshness of Farrier and Reeve, both of whom have never directed a film, nor ever intended to get sucked into such an abyss of corruption and fraud. Given that Farrier is a comedian and entertainer by day, his knack for levity is duly refreshing when necessary, reminding us of the intrinsic absurdity that runs through the entire otherworldly narrative.

The real star of the show is the mystery itself, which is, simply put, incredible that it even exists in the first place. You find your heart beating faster as the two glib New Zealanders trail cars, stake out apartments, and deal with curious personalities all of whom have been affected by or drive this business of tickling.

I can imagine some viewers might perceive Farrier and Reeve’s story as a fluke—that Tickled was matter of happenstance that fell into their laptops. In other words, they’re lucky sons of bitches. These directors, however, deserve far more credit. They did not back down when real serious threats were shoved in their face, nor did they belittle the project simply because the subject by nature causes laughter. To them, the degradation of innocent lives was unacceptable, and the fact that it just so happened that tickling formed its background, then so be it. Tickled would be their battle cry.