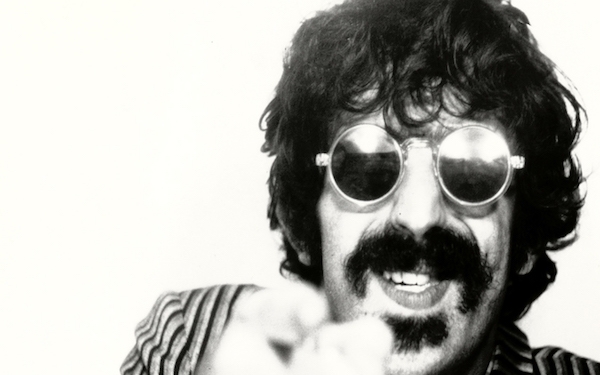 Part of the legacy of Frank Zappa is that no one can quite pin down exactly who or what Frank Zappa really is. Sure, he’s a musician, composer, activist, and artist, but every time someone tried to define what that meant to him and should mean to us, he shook off the shackles of expectation to invent a new idea entirely. Many journalists, artists, and fans throughout his three-decade career found out how useless it was to try to put words into his mouth, that’s why Eat That Question: Frank Zappa in his Own Words is quite possibly the most appropriate encapsulation of Zappa’s angle of intent, because none of those people get to voice there say. This is purely Zappa on Zappa.

By way of Zappa’s family, specifically his wife Gail whom Schütte pestered for years to accept that indeed this documentary needed to be made, Eat That Question became a single stage for all of Zappa’s ideas to come together in one cohesive breath. From his very first interview with Steve Allen, whom he immediately made uncomfortable by his bizarre idea of using a bicycle to create music, to his last interview as he wrestled with the final stages of cancer, we see how, in an extremely rare occasion, viewership and industry lost the battle in control, censorship, and expectation.

Just like the name of his band Mothers of Invention implies, Zappa refused to adhere to kind of mind numbing, mass media tendencies that became overwhelmingly popular with the rise of consumerist technologies. If you think with his wild hair and even wilder lyrics meant he must’ve been strung out on the dopest of dope, giving him all these crazy ideas, think again. Stone cold sober for all of his life and, still, the question itself seems to bore him.

Eat That Question then begins to explore how the normative powers that be are the secret to destruction—that by adhering to the rules and regulations of musical structure, content, or genre means that you have given up. Zappa was challenged only by what was in his own mind, constantly attempting to make sense of an overload of expression. While many may find the end result unappealing or distasteful, well, first of all he couldn’t have cared less, but that’s also where he was able to explore how he could change the scope of music’s reach rather than music’s reach could change the scope of Zappa.

Thanks to Schütte’s exhaustive efforts at uncovering some incredible archival footage, from interviews, to concerts, to news clips, we get to experience that scope of a man, or at the very least get a satisfying glimpse of it. We aren’t subjected to talking heads who vomit analysis at our feet, begging us to listen to their take their word as truth, for what Schütte puts together is a marvelous montage of Zappa, an orchestra, if you will, of his own testimony and makes you daydream about what he would say and create if he were still here today.

Because the man somehow managed to release 62 albums over his career, there was plenty to discover about the way he frames the world as he looks out, and how that translates to the page, to the piano, to the synth, and Eat That Question makes that process a lot easier for us, the plebians in a sense. After all, all we can do is take his word for it. And I am woefully aware that he probably would’ve hated this review.

EAT THAT QUESTION opens Friday, June 24th at The Nuart Theatre in Los Angeles and the Film Forum Triplex in NYC. For additional theatre locations nationwide and to purchase tickets, visit the official website, Eat That Question.