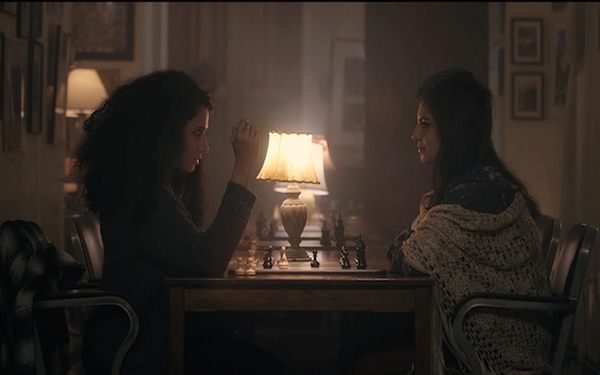 In making her short film “I Say Dust,” Darine Hotait wanted to explore Arab American identity from her perspective as a New York-based American Lebanese writer and director. It just so happened that her two lead characters would be women in their 20s who share a kiss. That kiss, however, has put “I Say Dust” at the center of a long-standing discussion about censorship after it was recently banned from two film festivals in the Middle East.

“I didn’t really know what to think,” Hotait said. “I always thought that I might be asked to remove (the kissing) scene from the film — not that I was going to agree to that — but I never thought that the film would be banned and not granted a (screening) permit completely.”

“I Say Dust” was first released in September. Since, it has made rounds at festivals worldwide nabbing awards at Rome’s MedFilm, Buenos Aires’ Latin Arab and the Afghanistan International Women film festivals.

Hotait, who is a co-founder of independent film production house Cinephilia Productions, has refrained from doing many interviews about the situation to allow the international scrutiny to die down. She spoke with The Times, however, via email about the film’s censorship and her plans to fight back.

Q: As an American Lebanese, how important was it for you to show your film at the Lebanese Film Festival?

A: It was of utmost importance. My film is not, per se, a Lebanese story with Lebanese characters, but I know many people there would associate with the film’s premise. Lebanese people, even while living in their own country, always feel that they are searching for their identity elsewhere.

Q: What went through your mind when you were told that the film was being banned?

A: Just to clarify, the Lebanese Film Festival is not the one who banned the film. (They) programmed the film, but were forced by the exhibitor to present all the films to General Security Censorship Office in order to obtain a screening permit. On the contrary: They were the ones who pushed very hard to get the film to screen.

Q: Did you expect this to happen, knowing how the country feels about LGBT people?

A: To be honest, I was not informed that there was something by law that condemns LGBT people and (legalizes) imprisonment for any homosexual act in Lebanon. I don’t live in Lebanon and I am not very familiar with the ins and outs of the system in that regards. I know that many films were censored before, but those were tackling political subjects. And those with sexual content would go through a re-editing process.

I honestly did not expect that my film would be banned in Lebanon because of a shot of two girls kissing. In 2010, I presented a film of mine at the Lebanese Film Festival and there was a shot of two boys kissing. They were not the main subject in the story, but the film was granted a permit and was screened without any issues.

This makes me think that the road since 2010 seems to have gone downhill.

Q: The film was also banned, after already being accepted, at an Egyptian festival. What reason did they give you?

A: The story in Egypt is quite different than in Lebanon. In Egypt, the festival that selected the film (rescinded) their decision and self-censored themselves. I guess they knew they were going to have to present the film to General Security and they probably assumed that the film might not pass so they decided to self-censor the screening — which is something I do not appreciate. The reason was again a shot of two girls kissing.

Q: Did the festivals offer any apology or consolation?

A: The Lebanese Film Festival was extremely supportive and they stood up for their choice to have had selected the film and have taken the risk to bypass censorship until the end. They also have defended the film in the Lebanese press. Even though the film ended up not screening at the festival, the jury did award it a special mention award in the best short fiction category.

Q: What has the response been like? Are people more supportive of you or General Security?

A: The response of the majority has been very supportive as people were sort of shocked to learn that the film was banned because of a shot of two girls kissing, (especially when) you see every day on Lebanese television all sorts of provocative content whether political, sexual or societal. I had a lot of support from local activists.

Of course, you get the other reaction that supports General Security against homosexuality by condemning it as an act against the nature of human beings and against religion. (To them,) a filmmaker like myself who presented two girls in love should be banned from voicing my opinion and point of view. For them, I am definitely misrepresenting the culture and the religion, Christianity or Islam.

Q: You chose not to speak to any international press. Why?

A: When this whole issue first happened, I chose to not speak to any press, local or international, because I did not want to participate in the conversation. Most press wanted to write about it because it was a hot topic without even having seen the film.

My other issue is that the film was censored for reasons that are not exactly in line with the thematic values of the film. The entire film, which tackles subjects like home and identity in a diaspora context, was rendered into talks about a kiss between two girls. I found this to be very misleading and misrepresenting the film’s main premise.

When an event happens, people get excited and feel the need to spice up a subject instead of telling the true story. Waiting until the storm calms down is always a better idea. Now, whoever decides to talk to me about it, I know for a fact that they are not under the spell of “let’s highlight what’s hot.”

Q: What words of wisdom or encouragement do you have for LGBT people and other filmmakers of the region who may face similar issues?

A: Self-censorship is your antagonist. To win the game, don’t play the cards too close to your chest. Open your cards, shine the light and let the world know your story.

Q: The film has been acquired by BBC and AMC Networks. In what ways can you protest or verbalize the problems associated with this type of censorship? What are the film’s next steps?

A: When the film was censored, I was pressured by many people to take action. Some said I should take this case to court. Others, that I should lead an activist group. But they censored the film so it doesn’t get screened and seen by people. What I am doing is the exact opposite. I am working hard on getting the film to be seen by as many people as possible — and I have decided to organize a pop-up screening in Lebanon, where we only announce the date and time with short notice. That’s why having the film acquired by channels and online platforms is, in a way, a victory for the film and a defeat for censorship.