Should a chimp have legal rights? Legal battle to grant animals ‘personhood’ transforms creators of 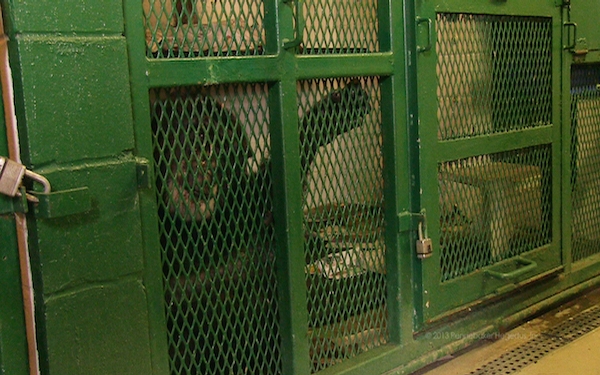 D.A. Pennebaker and Chris Hegedus are renowned for their clear-eyed documentaries examining everything from presidential campaigns (“The War Room,” from 1993, which documented Bill Clinton’s rise and brought the political duo of James Carville and George Stephanopoulos to the world) to obsessive French chefs (“Kings of Pastry,” from 2009, which offered the spectacular sight of grown men shedding tears over cakes).

Pennebaker, of course, is also known for seminal 1960s documentaries such as “Bob Dylan: Don’t Look Back” and “Monterey Pop.”

Now Pennebaker and Hegedus have taken on a thorny philosophical and legal question in their new film “Unlocking the Cage”: Can a chimp be a person?

They explore that question through the legal quests of Steven Wise, a charmingly rumpled lawyer who has long defended animal rights in the courtroom.

Wise, of the Nonhuman Rights Project, is attempting to get a court somewhere in the United States to imbue a trio of intelligent species — chimpanzees, elephants and dolphins — with the legal benefits of “personhood.”

Some would argue that if the Supreme Court can rule that corporations are people, Wise’s fight for animal personhood shouldn’t seem far-fetched.

If Wise is successful, chimpanzees, elephants and dolphins would be granted certain rights of autonomy that could prevent them from being caged for medical experiments or put on display in zoos.

The pair were in Southern California last week for the Los Angeles debut of “Unlocking the Cage” at the Laemmle Monica film center in Santa Monica.

Pennebaker also has an exhibition of film stills from his Dylan documentary on view at the Morrison Hotel Gallery in West Hollywood.

In this lightly edited conversation, the pair chat about how they learned about the fight for animal personhood, how it changed their view of animals, and how they keep it together as a couple and a creative partnership after 40 years of filmmaking.

How did you learn about Steven Wise?  Hegedus: Like a lot of our films, somebody introduced us and asked us if we’d be interested in following him. He was about to start this most meaningful journey that he’d spent decades preparing for. We were introduced by Rosadel Varela, who ended up being a producer on the film.

What made you think he was a good candidate for a documentary?  Pennebaker: The idea of going into a court and saying, “I want you to see this animal as a person” seemed a difficult idea. And being able to film a judge listening to this argument and saying, “Let’s think about this,” that seemed very intriguing. What happens in courts affects us all, but you don’t see it very much. It’s a sense you seldom get about history.

You’re watching as (Wise) answers a judge in the court and you’re hearing about something that is fantastic in its implications. That interaction was so exciting for me to watch.

Hegedus: One of the things that interested me too — besides going into a court and arguing that an animal was a legal person, which is bizarre and novel — was that (Wise) was focused on these species that have been studied extensively.

So to go with these primatologists and see their work was incredible. We visited Kanzi (a bonobo that understands language), and I had very much a life-changing experience. These are animals that could communicate. There was a chimpanzee that was the first to know American sign language, who taught it to the baby.

That they could communicate in abstract ways — once you have an experience like that with a creature, you can never go back. It made Steve’s quest more valid for me.

You spent three years following Wise — a lot of it in courtrooms, stuff that doesn’t always make for awesome filmic action. Were there ever moments where you wondered if this would coalesce into a film?  Pennebaker: You always wonder that. Every morning you wonder that.

Hegedus: I wondered that many times along the way. I wondered if this was a subject that could be done. I was ignorant about the law, and these cases take so long to come to a decision. And you don’t know if you’re going to get in to the courtroom and have the dramatic climax of the film.

But there was a moment in the beginning, where I was riding in the car and Steve told me that when he first started out, he’d been barked at in courtrooms, and it struck me how things had changed. This was a person who spent 30 years being humiliated, but the attitudes have changed — even in the process of doing this film. When we started, chimpanzees were being used in entertainment, for medical research, in roadside zoos — but in the process the National Institutes of Health announced that they wouldn’t use chimpanzees in research anymore.

Pennebaker: It’s about our relationship with animals. What they mean as fellow inhabitants of the planet. Views are changing very rapidly.

How did your work on this film change how you see animal sentience? Did you become vegetarians while filming?  Hegedus: We were definitely around a lot of vegans throughout the process. It changed the way we eat and think of food and think of animals and our total dominance of animals in our lives.

I remember when Steve came in and he was talking about elephants and the other species. And I said, “What about zoos? Would elephants be in zoos?” And he said, “Probably not.”

Now it seems crazy to me to put an elephant in a zoo. Los Angeles was one of the places where there was activism about the presence of elephants in the zoo and the surface they spent their lives living on. It’s a mind shift.

I think you see it with this gorilla case. (Harambe, which was shot at the Cincinnati Zoo in May.) People are now thinking about that too.

Pennebaker: If that gorilla had come under Steve’s case it would have been declared a person and he wouldn’t have been in a cage in a zoo anymore.

You seem to be drawn to obsessives as subjects — ambitious individuals on sometimes quixotic quests. What draws you to these figures?  Pennebaker: I don’t know. Why do you decide who to marry? You’re drawn to them because there’s something about them that you want to find out more about. That’s really what this kind of filming is. It’s the use of the camera as a flashlight to find out what’s going on around you. It’s an examination process, a searching process.

You don’t do research, because the filming is the research.  Hegedus: We don’t look for adversarial characters. I want to follow and be around people I admire and see if they can do it — if they can jump over the cliff and survive.

I understand it’s the 40th anniversary of your filmmaking partnership. You are also married. Why do you think you have worked well as a team? Do you have many creative battles?  Pennebaker: I never think of it as having a beginning or an end. I feel like I’ve always known Chris and always worked with her. She’s the best filmmaker I know.

Hegedus: We have big battles where we get divorced once or twice during the process of a film. (Laughs.) But we work it out. And part of that is having incredible respect for each other. I have tremendous respect for Penny, who had made quite a few films before we met. To be able to go on this journey with him is amazing.

You’ve worked on various documentaries on political campaigns — “Primary,” from 1960, and “The War Room.” How are political operatives like chimps?  Hegedus: They all should be legal persons.