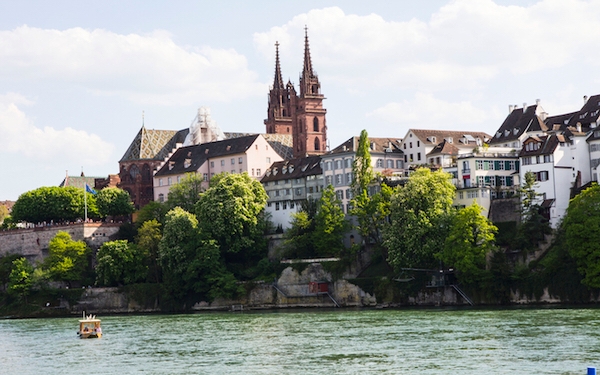 River cruising is all the rage in Europe these days. It is, in fact, one of the fastest growing segments of the entire travel industry. During the last five years, traditional big ship cruising enjoyed an annual increase in the number of guests of about 5 percent. Cruising on the continent’s rivers during the same period has grown at an annual rate of 16 percent. And indications are that the boom has just begun. New ships are coming on line at a breakneck pace – with 22 new river boats scheduled for launching by 2018.

The popularity of cruising the continent’s scenic rivers shouldn’t come as a surprise. Europe has more navigable waterways than any other region in the world — and arguably more diverse cultures and visitor attractions along its riverbanks than any place else.

River boats provide vacations that generally are hassle-free, requiring little travel within the trip to get to interesting places. Guests know that they can step off their intimate boat and be in an historic city or lovely rural village within moments. They can walk to many of the major sites and can devote more time in port to exploring local history, walking or hiking in nearby woods, riding bicycles, shopping or sampling local cuisine.

Cruising with fewer passengers — 200 at most — encourages a real camaraderie among those who share a river adventure. Guests are nearly always within sight of land, a factor that adds to the intimacy of the experience and makes river cruising in Europe particularly attractive.

I’ve had the good fortune to cruise nearly all of the rivers of Europe — the Danube and Rhine several times — and my favorite always has been the Rhine. For me, a Rhine cruise offers the ultimate in scenic splendor and cultural diversity — and I love the regional cuisine — of France and Germany in particular. So no one had to twist my arm to accept an invitation from Viking River Cruises to join its newest vessel, Alruna, for an eight-day Rhine cruise from Amsterdam to Basel, Switzerland, in early May.

My friend Melinda and I arrived in Amsterdam with only enough time before departure to stroll for a couple of hours along the city’s canals — dodging a swarm of cyclists nearly every step of the way.

Following a sound night’s sleep, we awoke in Kinderdijk, a village in the province of South Holland — famous for its network of 19 working windmills dating to the 1740s. These mills weren’t made for grinding but rather ingeniously for pumping water from lowland areas (or polders) to allow for farming. We were captivated by the old mills — protected as a UNESCO World Heritage Site since 1979 — and amazed to see them still functioning after more than three centuries.

Churning along the Rhine into Germany, Alruna’s next call was Cologne (Germans call it Koln) where we joined an included excursion, following a local guide into the city center where we craned our necks to view the massive Cathedral. Considered a masterpiece of Gothic design, it took seven centuries to build and was the tallest structure in the world when completed in 1880. We weren’t surprised to learn that it too was named to UNESCO’s World Heritage listings. Later we strolled along the banks of the Rhine through the Old Fish Market, backed by a colorful row of townhouses that date back to between the 14th and 17th centuries.

That evening we joined an optional excursion to immerse ourselves in Cologne’s lively brauhaus culture and to sample some Kolsch — a light, crisp beer — that is brewed only in Cologne. Our pub-hopping adventure led us to several historic brew houses, including Brauhaus zur Malzmuhle, where we tipped yet more glasses of Kolsch, served with a hearty meal of wurst and schnitzel.

A call in Koblenz the following day found us joining an optional excursion to Ehrenbreitstein Fortress. Strategically located high on a hill overlooking the city where the Rhine and Moselle rivers meet, the old citadel provided some fantastic views — and an up-close look at this mighty and once-invincible Prussian military fortification. An afternoon run through the Rhine Gorge was for us the absolute highlight of the cruise. This 40-mile section of the Upper Middle Rhine Valley between Koblenz and Rudesheim is quite literally breathtaking in its beauty — especially so on the fine sun-drenched day that we enjoyed. Lined with stone castles and laced with vineyards, this iconic gorge was named in 2003 to the growing list of UNESCO World Heritage Sites we’d so far encountered along our route.

Rudesheim offered another opportunity for a night on the town, sitting in on an optional group dinner at one of the lively wine restaurants along the town’s famed Drosselgasse. The narrow cobblestoned pedestrian way is lined with shops and restaurants and somehow manages to retain its 15th century appearance and atmosphere — even in the face of ever-increasing tourism (read river boat visits). Our dinner at Rudesheimer Schloss, seated in close proximity to the house oom-pah band, was a rousing affair — supplemented with bottle after bottle of fruity Rheingau wine and a farm-to-table feast featuring a roster of typically rich regional dishes.

From this point on, our days seemed to pass more quickly. A whirlwind tour of Heidelberg and its legendary fairy-tale castle came next, followed by a brief afternoon visit to Speyer, home to the Imperial Cathedral, one of the finest of all Romanesque cathedrals — another UNESCO World Heritage Site — and the burial place of eight Holy Roman emperors. Next on the itinerary: that Alsatian charmer, Strasbourg. We had a great time there, roaming the canal-laced Old Town, aka Petite France, with its picturesque half-timbered houses. Later in the day we joined an optional wine-tasting tour that led us into the heart of the Alsatian wine-growing region — where wine has been produced since Roman times.

Returning to Germany, we enjoyed our final day of the cruise by signing on to an included Black Forest excursion out of Breisach — a four-hour coach tour that resulted in some extraordinary sightseeing. Rolling hills and valleys studded with rustic farms and forests appeared to us like scenes straight from “The Sound of Music.” Stops were too limited but otherwise the tour proved a near-perfect conclusion to our Rhine voyage.

Scheduled to disembark the next morning in Basel, our cruise was brought to a halt in Breisach owing to a malfunctioning lock on the river approaching Basel. Viking employs a fleet of dedicated coaches and the company quickly and efficiently organized an alternate plan — deploying guests to the EuroAirport in nearby Mulhouse, France, the train station or to a city hotel.

Having never visited Basel in depth, we’d opted for a two-day stay and found it to be a dynamic and inviting metropolis offering a rich variety of cultural, historical and culinary experiences. We visited several of the city’s 40 museums, including the excellent Kunstmuseum, home to one the oldest and largest public art collections in the world, and the Basel Historical Museum. Housed in the 14th century Barfusser Church, its collections chronicle the history of Basel from the Middle Ages forward and include an exhibit of priceless items from the Basel Cathedral Treasury. The splendid weather we’d enjoyed during our cruise continued and we took advantage of it, wandering around Old Town, taking in the City Market, where we snacked on fresh spargel — white asparagus — a wildly popular seasonal delicacy in these parts. We also attended a youth folk chorus performance in the courtyard of Basel’s colorful City Hall (Rathaus) and later paid a visit to the Basel Zoo where they’ve done a great job of eliminating cages in favor of open space for many of their animals. Basel kept us on the move for sure, but two days didn’t do the city justice — leaving plenty to see and do for a return visit.

Representing Viking’s latest Longship-class river boat design, Alruna was built in Rostock, Germany, and christened (along with five other new sister ships) on March 1, 2016. Featuring state-of-the-art hybrid-diesel engine technology, the 443-foot, 5,000 gross ton vessel accommodates up to 190 passengers in 95 staterooms in eight categories ranging in size from 150 to 445 square feet. Seventy-one staterooms feature balconies and all include such amenities as hotel-style beds, 40-inch flat panel TVs with premium entertainment package, free Wi-Fi, refrigerators and safes. Interiors throughout the ship reflect a highly contemporary Scandinavian design executed by the firm Yran & Storbraaten of Norway.

Primary public areas, including the atrium-style lobby, Alruna Restaurant, Aquavit Terrace and the Observation Bar & Lounge, are located on the main deck. Aquavit Terrace, with its outdoor seating area at the bow of the ship, offers al fresco dining — with great views of the river. The sun deck provides even better viewing and features a walking track, putting green, deck chess and shuffleboard.

We found Alruna’s staff and crew of 50 to be uniformly friendly and efficient. The wait staff in particular was prompt and personable and food was well prepared and presented, coming from a remarkably small galley. Selections included many regional specialties and for the most part were nicely balanced, quite tasty and satisfying. Complimentary beer and wine were offered at both lunch and dinner.

Fares for the eight-day “Rhine Getaway” cruise currently start at $2,049 per person although special fares and promotions are often available. Fares include six excursions. Optional excursions are offered at most ports.