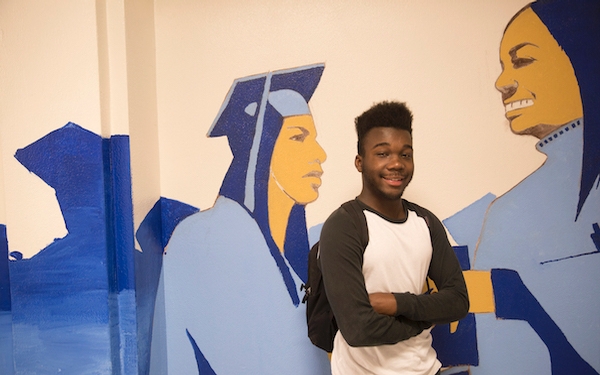 Damion Lester is just the kind of kid UCLA would love to have. He’s a straight-A student, class president and technology buff who is building his own computer from scratch.

The standout student at George Washington Preparatory High School in South Los Angeles also is African-American — a demographic the Westwood campus is working hard to woo to make sure its student body reflects the state’s rich diversity.

Some of UCLA’s best and brightest gave him and other students a five-star tour this year, complete with academic advice, financial aid information and a Bruins cinch bag and water bottle.

No matter that Damion was still in ninth grade.

The campus visit was part of UCLA’s aggressive new efforts to boost the number of African-Americans and other underrepresented minorities without using affirmative action, which is banned by state law.

“I call it intrusive recruiting. We’re in your face,” said Youlonda Copeland-Morgan, the associate vice chancellor for enrollment management hired four years ago to revamp outreach strategies. “We’re out there like college coaches.”

Twenty years after California voters passed Proposition 209, the nation’s first ban on affirmative action at public universities, UCLA is leading the way in boosting diversity without considering students’ race or gender in admissions. Copeland-Morgan and her team are working with 20 Los Angeles Unified high schools and several African-American churches in the Inland Empire to scout promising students and keep them on track.

Recruiters are showing up not just at college fairs, but also community events such as the Taste of Soul street festival in the Crenshaw neighborhood. They hold informational sessions at Starbucks in Compton, South L.A., Ladera Heights, South Gate. And they use frequent “touches” — calls, emails, cards and invitations — to forge lasting bonds.

Such efforts do not come cheap. To pay for them, the school has boosted its California student recruitment budget to $1.7 million last year from $1 million in 2012, when Copeland-Morgan was hired.

The passage of Proposition 209 initially sent black and Latino enrollment plunging throughout the University of California system — especially at UCLA and UC Berkeley, the most selective campuses. The number of African-American freshmen enrolled at UCLA fell by nearly half — to 144 in 1998, the first year the ban took effect, from 264 in 1995. At Berkeley, over the same period, it dropped to 126 from 215.

While Berkeley has yet to catch up, UCLA finally got its number back to pre-Proposition 209 levels last year, enrolling 279 African-American freshmen. They make up 5 percent of the freshman class, compared with 7 percent in 1995, which dissatisfies Copeland-Morgan. Still, the figure is nearly on par with the African-American share of California public high school graduates, which was 5.9 percent in 2015.

The UC system as a whole also has made progress, this year admitting its most diverse freshman class ever. All told, African-Americans and Latinos made up 39 percent of the 66,123 California high school seniors accepted to UC’s nine undergraduate campuses — a significant increase from 16 percent in 1998.

UC has spent more than a half-billion dollars in the last two decades on efforts to diversify its student body with race-blind programs — many of them focused on college prep for low-income students, who are disproportionately Latino and African-American — and invested in training for teachers and counselors to get students college-ready at 1,100 schools throughout the state.

Administrators have modified their admissions process to give greater weight to students who show resilience in the face of hardship.

Borrowing an idea from Texas, UC has spread access by guaranteeing acceptance to the top 9 percent of each California high school graduating class.

But whether those gains outweigh the losses since Proposition 209 is hotly debated.

UC President Janet Napolitano said the affirmative action ban has made it impossible to create a student body with an appropriate racial and ethnic balance. UC argued the merits of affirmative action to the U.S. Supreme Court, weighing in on a case challenging the University of Texas’ use of race in admissions, and said its experience showed race-blind policies were ineffective in fully diversifying.

Some studies have concluded likewise, including an October analysis by William Kidder of UC Riverside and Patricia Gandara of UCLA. The pair concluded, for instance, that UC’s outreach and academic prep programs have been pricey and inefficient because they can target only low-performing or low-income schools, not black or Latino students directly.

Although the number of underrepresented minority students at UC schools is larger than ever, the pair found, it has not kept pace with the state’s changing demographics. More than half of all California public high school graduates are Latino or African-American. It’s not clear how many meet UC’s eligibility criteria of a 3.0 GPA, completion of college-preparatory courses and a minimum score on the SAT or ACT; in the last state review in 2008, about 6 percent of African-Americans and 7 percent of Latinos were deemed eligible.

“California’s experience shows that race-neutral alternatives are costly, inefficient, and do not work at highly selective campuses,” Kidder and Gandara wrote.

“Prop. 209 was arguably the best thing that ever happened to the experience of racial minorities at the University of California,” argued Richard Sander, a UCLA law professor.

He said his own studies show that the initiative pushed UC to help boost the academic preparation of minority students, who now boast higher college graduation rates than those admitted under affirmative action.

One recruiting ground for promising minority students is Washington Prep, a campus in the high-crime, low-income Westmont neighborhood. The UCLA Black Male Institute sends mentors there weekly to meet with the best and the brightest among the school’s mostly Latino and African-American students, who still tend to struggle with English and math.

“You wouldn’t have been identified to be here if someone didn’t see your college potential,” Tyrone Howard, the institute’s founder and a UCLA education professor told students during a recent visit. “There is no limit to how far you can go.”

Joseph Diaz, a UCLA student mentor and biology major, taught Washington Prep sophomore Robert Couch how to organize his time by making a chart of classes, assignments and deadlines. He said it can be helpful to read textbook chapter summaries before tackling the chapters themselves.

Robert credited Diaz with helping him earn an A in his Advanced Placement biology class. Now the confident 16-year-old dreams of studying biochemical engineering, maybe at UCLA.

But Copeland-Morgan isn’t resting easy. “It pales in comparison to where we could be,” she said.

Mercedes Cornelius, a third-year Bruin in biophysics and applied math, said Copeland-Morgan was one reason she chose UCLA over Harvard. The administrator collared her at the annual Bruin Day for admitted students and pitched UCLA’s scientific research opportunities. Cornelius said Copeland-Morgan inspired her as an African-American female role model and made her feel at home.

Copeland-Morgan also won over Jonathan Kidd, a senior at Da Vinci Design high school in Hawthorne who was torn between UCLA and Claremont McKenna College. She introduced him to financial aid administrators who made UCLA affordable and to African-American students and organizations who made the campus feel welcoming, he said.

More students are in the pipeline. During a recent presentation to students from four L.A. Unified high schools, UCLA recruiters described the university’s generous grants and scholarships and touted its more than 1,000 student clubs. They told students including Damion to take rigorous classes, develop leadership skills, perform community service and use their application essays to highlight challenges they’ve overcome.

After touring the campus with UCLA students who were black males like him, Damion said he felt a sense of belonging. Teachers suggest he aim for Stanford or Harvard, but he declared, “UCLA is No. 1 on my list.”