Can app find next ‘Harry Potter’? 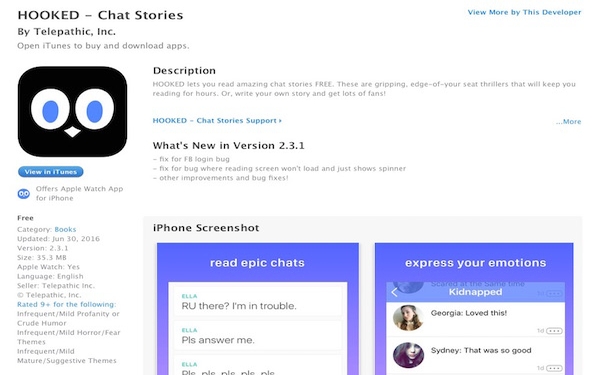 But during the last year, the Silicon Valley upstarts have been making a bold pitch to Hollywood — use data to find the next “Harry Potter.”

Hooked, which publishes experimental short stories in the form of text message conversations, has won investments from entertainment business heavyweights at companies like Warner Bros. and talent agency WME.

Why would studio executives care about a fiction app for the Snapchat-addicted? Some think the San Francisco startup might have a diamond in the rough — the data it uses to figure out which stories are working for its readers and which aren’t. Hooked is one of several tech companies that are trying to bring better analytics to Hollywood, which is trying to find new ways to target younger audiences who aren’t going to movies as frequently as their parents.

Backers of Hooked, including Warner Bros. production head Greg Silverman and former WME agent-turned entrepreneur Charles King, think Hooked could identify new material and writing talent, and test scripts and story ideas before they become movies and shows — taking some of the guesswork out of the inherently risky business.

The film industry has always made decisions based largely on instinct and experience, and that breeds uncertainty as companies spend hundreds of millions of dollars before they find out if they have a hit like “Zootopia” or a flop like “Gods of Egypt.”

“For Hollywood, most films require a huge capital investment, so the more data that’s available, the easier it is to get them made,” said Molly Schmidt, an investor at WME Ventures. “Hooked could provide granular data that could be very valuable for a studio, financier or any other stakeholder.”

And while Hooked is sure to meet with skepticism, it’s a logical extension of the entertainment business’ push to use numbers and technology more skillfully.

On the marketing side, studios and cinema chains are teaming up with third-party tech firms to target their advertising campaigns to certain segments of the audience, a more tailored approach than traditional TV commercials and billboards.

Through its database of 15 million moviegoers, Movio, owned by publicly traded company Vista Group, can analyze demographic data including age, gender and location and market to consumers based on that information.

“The cinemas are sitting on a huge amount of data,” said Will Palmer, co-founder and chief executive of Movio. “There’s already a massive move toward media that is measurable and targeted.”

The company says it has worked with all the major studios, and Sony Pictures has signed a deal to use Movio’s services for its movie slate. The studio has also forged a partnership with ad agency UM and cinema advertising company National CineMedia to better target ad campaigns with data, starting with the July 15 “Ghostbusters” reboot.

“We have made huge advancements in the use of data to reach moviegoers,” said Elias Plishner, head of worldwide digital marketing for Sony Pictures’ film division.

There are still major limits to what data studios can access. Theater chains are reluctant to share customer information with studios, preferring to use it for their own marketing efforts.

“The more data they can get the better,” said Eric Wold, a media analyst for B. Riley who follows cinema companies and movie studios. “But I’m doubtful how granular they can get.”

Although Hollywood is making progress in using metrics for marketing purposes, the creative end of the business remains a mystery. Enter Hooked, which has yet to test its Hollywood ambitions or develop scripts, and its founders are still trying to figure out how their platform could benefit studio players.

For now, Hooked is experimenting with a new form of writing that it thinks will prove attractive to millennials. Its stories don’t read like traditional fiction. Rather, the pieces — which span genres including mystery, romance and horror — take the form of a text message conversation. For example, one thriller on the app follows a person stuck in the trunk of a car, texting a friend for help.

Once users start reading a story, they must push a button on the app to see the next line of dialog. If they don’t continue, Hooked can then tell exactly when readers have lost interest. Users can also “like” stories and leave comments, giving the app feedback about what parts of the story work and what do not.

The company recruits graduates from creative writing programs to build its library of pieces, most of which take only five minutes to read. About 450,000 people have downloaded the free app and 9,000 stories have been published on the platform.

Gupta and investors say the app could be used to find new writing talent and original stories to adapt into movies, shows and online videos (in an early example, a story called “Past Perfect” was converted into a three-minute short film using Snapchat videos). It could convert existing scripts into episodic Hooked stories and see how readers react, piece by piece.

That may seem like a stretch, and some are skeptical of the idea, including “Foxcatcher” movie producer Anthony Bregman.

“It’s interesting conceptually, but who reads movie scripts?” he said. “How accurate is the judgment of a bunch of people who read scripts on iPhones?”

Hooked’s main goal is to reach a big enough audience so it can start making money, either through advertising or a premium subscription model. Hooked so far has raised $3.1 million in capital from investors.

“We thought Hollywood would just laugh in our faces and dismiss us as being completely ignorant, but it has been the opposite,” Gupta said.

She and Chordia previously founded music app maker Khush, which they sold to rival tech company Smule in 2011.

“I think it can push the boundaries for Hollywood in experimenting with new storylines and diverse characters,” she said. “If you can test stories and get data to test out stories, you could take out some of the guesswork.”