Beautiful - The Carole King Musical at the Hollywood Pantages Theatre 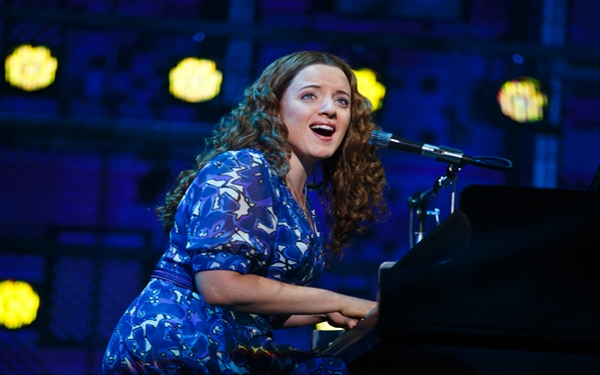 The Tony Award-winning hit "Beautiful – The Carole King Musical" is an inspirational show for teenage girls and theatregoers. "Beautiful" traces the career of Carole King (aka Carol Klein) as a songwriter under music publisher/producer, Donnie Kirshner’s hit machine in the Brill Building in New York City.  The musical is interwoven with numerous hit songs that the Brooklyn raised King, her husband/partner, Gerry Coffin wrote along with best friends Cynthia Weil and Barry Mann, who were also responsible for writing a number of their own hit songs including “You’ve Lost That Lovin’ Feelin’.”  Between the songs and dance numbers by successful musical acts of that era, theatregoers are given a glimpse into King’s life as a young feisty 17 year old girl, working her way into the music industry and rising to a confident singer in her own right.

Directed by Marc Bruni, "Beautiful" is presented in two acts. Act I opens at Carnegie Hall in 1971 with King singing “So Far Away.”  The show then goes back in time where a younger King tells her divorced mother that she is going to New York City to try to sell a song to Donnie Kirshner.  During her rise in the music industry, King meets lyricist Cynthia Weil and composer Barry Mann.  Back at Queen’s College, King starts dating an inspiring lyricist, Gerry Coffin who eventually joins Kirshner’s music machine. It’s during this time, the couple produces their first hit, “Some Kind of Wonderfu," which The Drifters record.  The process of writing this song, along with others is captured in "Beautiful" and then is fully performed by the band.  This skillfully takes place as the set turns from an office space into an elaborate staged venue for a song and dance routine by the band performing at that moment. This formula repeats itself throughout a number of songs in Act 1 as Kirschner pits King and Coffin against Weil and Mann in humorous song writing competitions to see who will get to give The Shirelles their next big hit.  In this case, King and Coffin win with “Will You Still Love Me Tomorrow.”  Other artists featured in Act I include Neil Sedaka (“Oh Carol”); The Coffins babysitter, Little Eva (“The Locomotion”) and Janelle (“One Fine Day”).  The Act ends as Coffin confesses to King that he wants to be in a relationship with Janelle Woods.  The heartbreak and struggles King  faces to save her marriage sets the tone for Act II.

In the second Act, a 28 year old King navigates through her marital difficulties while raising two daughters.  She gives Coffin his space as he works through his marital affairs and eventual nervous breakdown.  Finally, with the support of Weil, she comes to the realization that divorce is her only option.  As she begins to explore life as an independent single woman, King gains confidence and ultimately decides to move to Los Angeles where she records her hit album, Tapestry with famed producer, Lou Adler.   The album was a huge success and is a one of the best-selling albums of all time, with over 25 million copies sold worldwide.

The musical concludes where it started with King’s performance at Carnegie Hall in 1971. Before the performance, a contrite Gerry Coffin comes to King’s dressing room and apologizes for his actions and how he hurt her. With their relationship now coming in full circle, King takes the stage and performs, “Beautiful.” The song is followed by a medley of her music that has the audience participating and rooting for King who was not defined by Coffin’s transgressions that destroyed their marriage but instead rose from it as a more confident person that ultimately succeeds on her own.

The acting in "Beautiful" is wonderful.  Abby Mueller (Kinky Boots) is fantastic as King.  She has a strong voice and a sensitive quality in her acting that shines in this musical. Her growth throughout the show is powerful from Act I to Act II.  A bit of trivia regarding Mueller is that her younger sister, Jessie Mueller originated the King role on Broadway. Liam Tobin does a terrific job as Gerry Goffin.  As the music world changes in the 60s, Tobin conveys quite well the difficulties that Coffin had transitioning from the hits he had in the 50s to not grasping the feel of the music of the moment.  Becky Gulsvig (Cynthia Weil) and Ben Farnkhauser (Barry Mann) provide humorous banter as they work through writing songs,  their own relationship and Mann’s hypochondriac condition.  Farkhauser is a talented actor, singer and musician.  His skills are put to the test in "Beautiful" and he succeeds. I look forward to seeing more of him in the future.  Also, Curt Bouril is fantastic as a comical Don Kirshner as is John Michael Dias who plays a variety of rolls including Neil Sedaka and Lou Adler.   The Choreography (Josh Prince), Scenic Design (Derek Mclane) and Costume Design (Alejo Vietti) are amazing and capture the essence of the time periods of the musical.

"Beautiful: The Carole King Musical" is now playing through July 17 at the Hollywood Pantages Theatre. For ticket information, visit http://bit.ly/29mcRqB