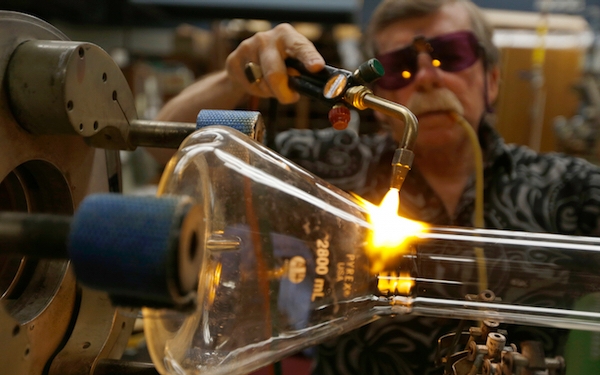 Hunkered down in the sub-basement of the Norman W. Church Laboratory for Chemical Biology, underneath a campus humming with quantum teleportation devices, gravity wave detectors and neural prosthetics, Rick Gerhart chipped away at a broken flask.

Blowtorch in hand, he pulled the softened glass apart like taffy, tweezing out glass shards with a flick of his wrist. Peering into the dancing flames, he examined his work for wrinkles — imperfections invisible to the untrained eye.

“It not only should be functional,” he said, smoothing the rim with a carbon rod, “it has to look good.”

Here in Caltech’s one-man glass shop, where Gerhart transforms a researcher’s doodles into intricate laboratory equipment, craftsmanship is king. No two pieces of scientific glassware are the same, and for more than two decades, students and Nobel laureates alike have begun each project with Gerhart’s blessing that, yes, he can create the tools to make their experiments possible.

But Gerhart, 71, is retiring, and the search is on to find someone, anyone, who can fill his shoes. In a cost-cutting world of machines and assembly plants, few glass blowers remain with the level of mastery needed at research hubs like Caltech.

“He’s a somewhat dying breed,” said Sarah Reisman, who relied on Gerhart to create 20 mazelike contraptions for her synthetic organic chemistry lab. “There just aren’t as many scientific glass blowers anymore, and certainly not ones that have Rick’s level of experience. Even a fraction of that experience, I think, just isn’t out there.”

Full-time university glass blowers are considered tops in their field, but few institutions still offer such positions or give young glass blowers the chance to hone their craft. When Cal State L.A.’s longtime glass blower retired last year, the shop which he had run for 30 years closed down. Similar fates have befallen glass blowing at UCLA and NASA’s Jet Propulsion Laboratory. At the University of California, Riverside, which once had three full-time glass blowers and two glass shops, a glass blower now comes in one day a week.

The University of Southern California is the only other university in the L.A. area that still has a full-time glass blower, Gerhart said. Across the U.S., those who land such jobs tend to stay until retirement.

“So now, to take my place” — Gerhart paused, spinning through his mental Rolodex. He chuckled: “Looks like we have to steal somebody.”

To master scientific glass blowing, proper training and apprenticeships are key. Only one school in the nation, Salem Community College in New Jersey, offers a degree program.

In addition to the hands-on training, which requires a knack for precision as well as coordination, students must take courses in organic chemistry, math and computer drawing.

“You need to know enough about everything, about mechanics, about chemistry, about physics, about thermodynamics — whatever a chemist can come up with, you need to know just a little bit to get that chemist through,” said Dennis Briening, instructional chair of Salem’s two-year program. “And of course, you need to be very skilled, technique-wise. So it really takes a long time to get to a position like Rick’s.”

Gerhart enrolled in the Salem program in 1965, after dropping out of college to give his father’s profession a try.

It was the heyday of scientific glass blowing. The craft, which dates back to alchemy in the second century, took hold in America by the 1930s and 1940s, after World War I cut off glassware supply from Germany. Glass — Pyrex and quartz in particular — remains popular because it can withstand high heat, reacts with very few elements and is transparent, allowing researchers to observe chemical processes.

The profession peaked after World War II, when booms in oil and government-funded research opened up numerous glass blowing jobs in many a lab. Scientific glass blowers didn’t only make research equipment, they created glass parts for such inventions as the laser printer.

At first, Gerhart hopped around a number of firms and worked alongside more experienced glass blowers at TRW Inc. and UCLA.

When he settled at Caltech in 1992, the glass blower before him handed over the key to the shop and said, “Good luck.” On his own, Gerhart pieced together his patchwork of experience to twist and fuse glass beakers and snake glass coils over vacuum chambers.

In a production line, a glass blower might make the same product every day, “I was doing something a little different every time,” he said. “That’s when I really started learning.”

These opportunities to learn on the job are now limited, though interest has not waned: This year, Salem Community College graduated 31 glass blowers — for years, the school graduated about 20 each year — and it expects 66 incoming students next school year. Social media videos have sparked new interest in the craft, Briening said.

But while his students have no trouble getting entry-level jobs at companies like Chemglass Life Sciences, a glass manufacturer, and General Electric Global Research, rarely are universities willing to budget the overhead costs for more than one glassblower, if any.

“Years ago, all the universities had two or three people,” Briening said. “I think that’s going to be a problem, because you’re not bringing up those young glass blowers anymore.”

One of the few resources left for the next generation is the American Scientific Glassblowers Society, a close-knit group that hosts national workshops and swaps ideas when a researcher’s custom order stumps one of its members.

Its members also serve as Caltech’s best — and possibly only — options once Gerhart leaves. But membership has dwindled from 1,000 in the 1970s to 492 today, and only some of these glass blowers, after a steep learning curve, might be able to do all the work Gerhart has done at Caltech, said Bob Ponton, who manages the organization and has served as its president.

“Rick’s one of those glass technicians that I put in the top 5 percent,” Ponton said. “He developed the techniques and skills to specifically meet the needs of that university and its researchers. And that’s what the good ones do. He’s not going to be replaceable.”

Back in the sub-basement, Gerhart cradled the repaired flask into an oven lined with vermiculite. In addition to custom orders, he revives equipment shattered by clumsy hands or too much pressure or heat.

One recent morning, he shuffled along a wall of aging wooden cabinets lined with Teflon valves, seal-grade quartz and glass tubes of widths ranging from 2 to 110 millimeters. Scribbled notes to himself, taped up years ago, offered reminders of melting points and tips such as: “50 percent hydrochloric to remove silicon vapor.”

He handed a thin tube to Chris Roske, a physical chemistry grad student who, like others, looks forward to Gerhart’s cheerful banter after a frustrating day of research or when an experiment explodes. Roske gasped when Gerhart mentioned he was retiring.

“No,” Roske said, drawing out the syllable. “Are you serious?”

Gerhart will miss teasing his students. He assured Roske he’d stick around until Caltech found his successor.

The search so far has produced six applications — double what Gerhart expected. The job posting’s requirements were accommodating: “2 to 20+ years” of experience, depending on the repertoire. A committee of top chemists and Caltech administrators will review these candidates in hopes that one can fill all the holes.

“You need a person who has some idea about the scientific process and how to translate what a student wants to do into a piece of apparatus that really works,” said Bob Grubbs, a 2005 Nobel laureate in chemistry and professor at Caltech. “How do you get from a couple scratches on a piece of paper, to something you actually go use in a lab that you trust and is not going to blow acid in your face?”

Fellow chemists are relieved Caltech will keep a glass blower on campus. For them, it’s more convenient than ordering from a catalog and preserves the intimacy researchers should have with the experiments they design.

“It allows students and Rick to just brainstorm about what’s possible,” said Jonas Peters, an inorganic chemist whose lab is filled with Gerhart’s elaborate glass coils, diffusion pumps and vacuum systems. “If it doesn’t work, you go back, he changes something, you try it again. There’s this iterative process of trying to make an apparatus that works for an experiment in a way that’s very custom and very interactive.”

“He’s really one of the great ones,” he said, pointing to a delicate curve in one of his manifolds that he dubbed “the Rick finesse.”

He sighed. Perhaps Gerhart could come back and show the new glass blower how it’s done.