L.A. a trove of cinematic worlds 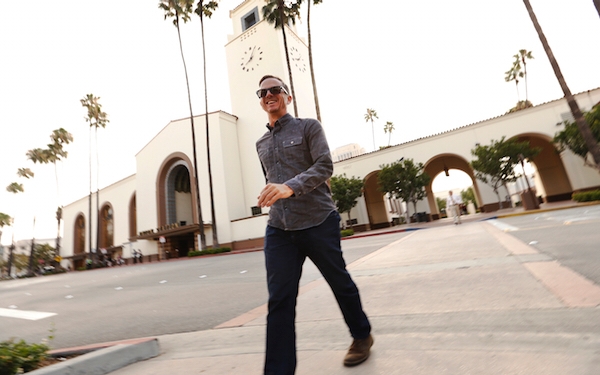 Caleb Duffy is a man of exacting frames. Even his thick black rimmed glasses connote focus and blocking out the extraneous.

A film location manager, Duffy can find dystopia on a skid row corner, small-town America in a Montrose bowling alley, a Hitchcock-era beach cottage south of Oxnard and a stretch of 1930s Art Deco glamour outside the Vista Theater in Los Feliz for a scene in Woody Allen’s upcoming “Cafe Society.”

“The cool thing about the Vista is that you can frame it out and not see the world,” said Duffy, noting, however, that modern-day clamor can flare at the edges. “While we were filming we had a helicopter land on Children’s Hospital over there. We had detoured traffic, ambulances, sirens, and in the middle of the street Woody was oblivious to it all getting his shot done.”

The son of an architect and a real estate agent, Duffy has the eye of an artist and the patience of a man accustomed to collecting licenses and permits to shut down streets for film crews. He mused that his trade, which is represented by the Teamsters in Los Angeles but does not have a branch in the Academy of Motion Picture Arts and Sciences, is “a thankless profession” of blending atmosphere and geography with financial constraints and the logistics of ordering tents, portable toilets, security guards and map makers.

“We’re trying to get into the academy,” said Nancy Haecker, a friend of Duffy’s and president of the Location Managers Guild International, which has about 400 members. The crusade for recognition is similar to that of stuntmen, who also aren’t part of the academy. “We feel we contribute to the aesthetics of a project. But location managers were seen as one of those below-line departments. We’re a little baffled by it. We’re not considered sexy.”

Duffy jots potential movie locations in a little black book; buildings, roads, mountains and coastlines are characters to him, images that lend perspective and resonance. He sees the world in gradations; few things escape his sense of scale. He loves how the light plays across the city, edging through alleys, piercing old theaters, climbing the glass of new buildings, giving him pretend glimpses of New York, Chicago and a bygone Los Angeles, where movie stars once made mischief along streets of stucco houses and car fins.

Drinking coffee recently at the Grand Central Market, he envisioned a tracking shot that wended from the barista to a woman with a baby to Angels Flight. “It’s a nonstatic scene, interesting depth,” said Duffy, 48, who has scouted sets for dozens of films and television shows including “Into the Wild,” “Behind the Candelabra,” “Eagle Eye” and “True Detective,” which spanned 150 locations shot over 120 days in six counties.

One of his most intense scouting assignments was on “Into the Blue,” a thriller filmed in the Bahamas that required him to scuba dive, sometimes as deep as 110 feet, while looking out for sharks and exploring shipwrecks.

“We built a road on the island,” he said. “We created our own underwater set with a DC-3 plane at the bottom of a 1-million gallon tank Bacardi used to store molasses for rum. We filled it with sea water and heated it to 90 degrees.”

His work on the Oscar best picture winner “The Artist,” a black-and-white silent movie partly shot in the Bradbury Building and evoking 1930s Hollywood, led to his work on “Cafe Society.” “A lot of getting a job is word of mouth,” said Duffy, a golfer and a drummer who was once in a punk-rock band. Working these days on the new TV series “The Good Place,” Duffy has three times won the “location professional of the year” prize given by the California On-Location Awards sponsored by Film Liaisons in California Statewide.

“At the beginning of a film,” said Duffy, “a location manager can put his fingerprint on the project. I look at depth a lot. How far can you see? The layer of movement and life so as a viewer we get the sense of where we are. What is this building representing in a story? Where are we going? You need a style and architectural feature and a natural movement from point A to point B.”

A slight man with a bird dog’s curiosity, Duffy, who grew up in Sherman Oaks and got his first job in TV doing sound on “Sesame Street,” has an affinity for Los Angeles. He has wandered its tunnels, glided across its skyline.

The city has been a shifting movie set for more than a century, evoking noir thrillers and intergalactic fantasies against the demands of union contracts and wonderfully impervious egos. The state’s 2014 expanded tax incentives for film companies, a proliferation of television shows and a surge of construction are increasing vistas for location managers. The profession has expanded since the 1960s, when location scouts increasingly ventured with cameras and compasses across metropolises, forests and deserts as filmmakers began moving away from studio lots.

“I counted 17 cranes on my way in today,” said Duffy, noting that an on-location film shoot can cost hundreds of thousands of dollars a day. “The alley behind the Orpheum and the Arts District have this grit and layer to them you can’t re-create. I would have loved to have seen downtown in the 1930s and ’40s. Those theaters alive and open. And the light reflecting off the new buildings going up is amazing. It’s all purposeful. They thought of that. L.A. is pliable. You can turn it into other places.”

This city is “a great back lot of hidden architectural gems that only the location managers know how to find,” said Harry Medved, a film historian and co-author of “Location Filming in Los Angeles.” “Woody Allen’s newfound cinematic affection for L.A. is obviously connected to Hollywood history. … Caleb knows these historic hometown landmarks like the back of his hand.”

Duffy recently wandered through morning light in Union Station. The expanse glinted with ochre, bronze and gold; of leather chairs and inlaid wood ceilings, a mix of Mission Revival and Art Deco that conjured grifters, Mad Men and doomed affairs. A woman hurried with a bag, and a breeze slipped through the courtyard. Duffy, who had scouted the station for “Charlie’s Angels: Full Throttle,” which turned the ticket hall into the boudoir of Madison Lee (Demi Moore), spoke of tiled roofs and train tracks stretching east.

“This is one of my favorite places,” he said. “I come here at night if I’m having a bad day. It has a sense for me of what old missions would be like, that old architecture of Southern California. It feels good. People going places. I’d like to have more films shot here, but I wouldn’t want it to lose its magic for me.”

He is also intimate with the less-adorned fringes. Duffy scouted the rough-side glare of the city in “Into the Wild,” directed by Sean Penn and starring Emile Hirsch in a biopic about Christopher McCandless’ fatal wilderness adventure. In one scene, the Los Angeles River is the setting for McCandless’ brief re-entry into society before he disappears in Alaska.

“Sean wanted it to be natural — without a cut — of Emile coming out of the river, hopping over a wall, having a train pass, crossing the tracks and going down Anderson Street east of downtown, and then we’d pick him up on the west side of the river underneath the 6th Street Bridge, crawling out of a hole and coming up through the operations tunnel. It took two weeks to build that sequence.”

Like many location managers, Duffy works most closely with production designers and Film L.A., which coordinates government permits for shoots. “Stuff like how to get a crane to drop its arm for an hour,” he said, “or closing a street for an explosion.”

His interactions with directors have included Allen (“very quiet, didn’t speak to me much”), Steven Soderbergh (“hands on about what’s going on”) and Penn, who, while traveling with Duffy on a scout for a film about plane-crash survivor Norman Ollestad, wanted to hop out of a van “and climb a mountain. He likes to feel it.”

He studied journalism at Emerson College in Boston and wanted to cover the Dodgers. A friend asked him to help out on a student film about horse racing — “I put microphones on jockeys” — and after the shoot he switched his major to film. After a stint in New York he returned to Los Angeles, where he interned on “Man on the Moon.” He ran portable air conditioners during production of “Erin Brockovich” near Barstow and grew intrigued with the topography of the Southland.

“You try to explore as much of the L.A. Basin as you can. That’s a lot of ground, and no one could ever cover it in their lifetime,” said James Lin, a mentor of Duffy’s who was location scout for “Transformers” and “Captain America: The First Avenger.” “The dichotomies of neighborhoods grow, mold and evolve. In Boyle Heights, it might be the kings of the mariachi, but what is it three years from now? Landscapes are constantly changing and you have to be aware.”

Duffy drove to Griffith Park the other day. The observatory, enshrined in cinema by James Dean in “Rebel Without a Cause,” seemed adrift in haze. Dirt roads threaded hills that reminded Duffy of “dragon humps.” He pointed to shadows and light, the creases of the land, and farther beyond, the city, which, with its skyline dotted by construction cranes, appeared exposed and unfinished. The perfect movie set.