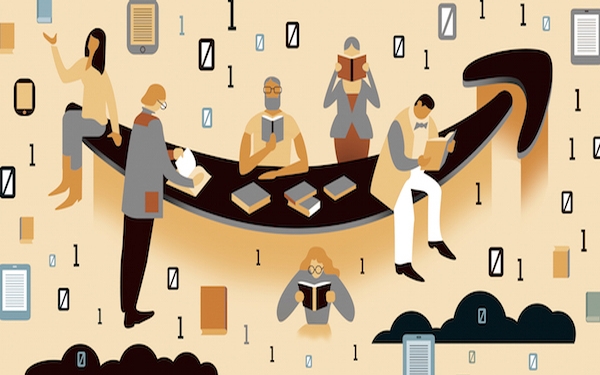 Within the highly automated folds of Amazon’s online bookstore, there’s a small team of literary types whose main job is rather old school.

They read books, write about them and rank the works according to their qualities, helping readers sift through thousands of offerings while also planting the tech juggernaut’s flag in the world of literary culture.

In an engineer-driven company ruled by algorithms and metrics, the Amazon book editors are rare birds. Once in a while, they’re misunderstood by authors and publishers who retain a deep suspicion of Amazon.com after years of clashes over the book industry’s future.

The editors produce Amazon Book Review, an online offering similar to literary supplements newspapers have been putting out for more than a century. They also put together frequent lists of recommendations prominently displayed on Amazon’s bookstore.

The current team was assembled by Sara Nelson, a renowned publishing veteran who was Amazon’s editorial director until recently ending her four-year stint to become executive editor and vice president at HarperCollins, one of the big New York publishers.

Even with Nelson’s departure, though, evidence is clear that Amazon intends to leave its mark in book culture as much as it wants to sell books.

Last month, after four intense meetings and a lot of hallway discussions, the team of editors picked “Lab Girl,” Hope Jahren’s memoir on becoming a plant biologist, as the best book of the year so far, an honor that some publishing experts said could help boost recognition and sales.

Nelson, in an interview before her departure was announced, said the editorial team’s scope is broader than that of highbrow literary journals. The ultimate aim, after all, is to sell books.

To be sure, the Amazon editors’ output is still far from having the impact of, say, The New York Times Book Review.

“I really don’t know much about it,” said Tina Weiner, director of the Yale Publishing Course, who added that skepticism about Amazon’s neutrality is hard to dispel because the tech and retail giant is regarded by some “to be only out to make a buck.”

Yet it comes at a time when many hard-up newspapers are whittling down their literary supplements, and getting a freshly minted book noticed amid a torrent of information is harder. “There’s probably a need for other sources” of serious criticism that will allow good work to surface, Weiner said.

Others in the publishing world have an unequivocally positive view of the Amazon book editors.

The program is “extremely, widely and warmly admired,” said a prominent New York literary agent who spoke on condition of anonymity. And not because they are the “biggest account in the business,” but because they read seriously and influence readers, the agent said.

The existence of this unusual group of book editors highlights the experimental strategy that underlies most of Amazon’s efforts.

The book editors’ curated approach coexists with automated recommendations based on a reader’s purchasing history and with thousands of customers’ reviews that readers post on Amazon’s site. It also overlaps with Goodreads, a website owned by Amazon that also has posted reviews and allows readers to see what books their friends are reading.

Then there’s the Daily Deal that Peter Hildick-Smith, CEO of publishing consultancy Codex Group, said generates “by far” the “biggest online discovery within the Amazon world.”

It’s interesting to note how much the book-editor team focuses on traditional publishing versus the fire hose of self-published Kindle works Amazon has enabled.

Part of it is the nature of the traditional review process, which is based on receiving galley copies in advance of publication so the editors have time to form an opinion and write it up, especially when they prepare monthly recommendations. Self-published books tend to head out of the gate without much notice, and there are so many it’s hard to pick which ones are relevant.

But team members say that as they develop twice-annual and annual recommendations they look for opportunities to surface self-published titles that might have made an impact.

Nelson, a former editor-in-chief of Publisher’s Weekly and book editor at Oprah’s O magazine, joined Amazon in the summer of 2012.

She came onboard to inject some life into the existing Amazon book review, then mainly known as “Omnivoracious.” The blog, Nelson said, “needed a face-lift.”

She cobbled together the current team of five editors, from all corners of the book world, including people already doing book reviews at Amazon and at New York publishing houses. Nelson ran the shop from her office in New York, close to the traditional publishing world, but her team’s book-filled cubicles are on the 11th floor of an Amazon building in Seattle, where the company is headquartered.

Unlike most literary reviews, which rely on freelancers, Amazon Book Review depends on content mostly churned out by the Amazon bookworms at the tune of a couple of posts a day. That includes about 10 book reviews per month.

That means a regimen of intensive reading. Adrian Liang, one of the editors and also an independent romance-novel author, said she likes to focus on sci-fi, fantasy and romance. Seira Wilson, who before joining Amazon in 2009 was a sales representative for HarperCollins, specializes in young-adult literature, as well as kids books and cookbooks.

Jon Foro, an 18-year Amazon veteran who was once a bookstore manager, likes to read narrative nonfiction and, according to his website profile, books about bears. Foro acknowledges the uniqueness of the group among Amazon’s legions of engineers and MBAs.

In recognition of the huge diversity of readers that shop at Amazon, book editors must be catholic in how they spend their reading time. They not only go for the big books likely to earn critical acclaim: they also aim for reading works that will entertain or otherwise be interesting to Amazon clients. In addition, genrereaders who buy on Amazon help inform what book editors are going to review.

The book editors also help bring literary culture to other Amazonians by moderating so-called “fishbowls” with visiting authors. (There are also fishbowls with famous people from the worlds of film and music, Amazon said.)

In June, in a room packed with more than 200 captivated Amazonians, Schluep interviewed Angela Duckworth, author of “Grit,” a New York Times best-seller about the benefits of having a strong and persevering character.

The event was streamed to a neighboring room, also packed. Other visitors have included Bob Woodward, the investigative journalist, and Ishmael Beah, who was launched to fame by his memoir of a life as a child soldier in Sierra Leone and a few years ago wrote his first novel.

Schluep, who led the conversation with Duckworth, said authors sometimes are intimidated by the idea of coming to Amazon.

Duckworth, for one, wasn’t too fearful. CEO Jeff Bezos’ mother, Jackie, sits on the board of her foundation. “I feel this strange kind of a tie-in” with Amazon, she said. Besides, “most of my books are sold through Amazon,” she said.

Perhaps where the editors have had their biggest impact is in their recommendations of what they consider the best reads. They do so monthly, tallying dozens of books spread in 15 categories, from history to business. They also put out more substantial “best-of” lists in June and at the end of the year.

Amazon’s recommendations are picked up by The Christian Science Monitor and Business Insider (a business-news website that counts Bezos among its investors), a sign that the book group is making the rounds beyond the online store.

In early June the editors gathered over bottles of water in a conference room to pick a midyear contingent of the 20 best books “so far.” Coming in with a list of 38 books drawn from monthly lists posted on the site, they aimed to quickly weed out 18. It was not easy.

As editors championed their favorites, Erin Kodicek, a one-time librarian and department manager at Barnes & Noble who has spent nearly 10 years at Amazon, kept bringing up the ax. “Don’t forget we have to cut some,” she said.

“Evicted,” a grim report about poverty in Milwaukee by Matthew Desmond, drew praise among many of the editors, one of whom suggested putting it close to the top.

“We can’t put too many depressing books near the top,” said Schluep, the former Random House editor.

“But it shows you a way out of the cycle of addiction,” said Liang, the indie author.

“How many are we going to have on the top five?” Schluep retorted.

“Maybe we should change the top five to top 50,” Kodicek said.

When it came to “Lab Girl,” it was clear that book would go places. “Top five for sure,” Kodicek said, to widespread agreement. “This could be a contender for No.1.”

Whether their picks have an impact on sales or put a book on the radar of other literati is hard to measure. The literary agent who didn’t want to be identified certainly thinks so.

Nelson pointed to the team’s early embrace of Celeste Ng’s debut novel “Everything I Never Told You,” picked as best book of 2014. It likely helped the book become a success, she said.

Juliana Kiyan, a spokeswoman for Ng’s publisher, Penguin Press, declined to say whether the imprint or the author thought they had gotten a specific boost from Amazon’s accolade. “We are thrilled with the success of ‘Everything I Never Told You’ and grateful for the enthusiasm and support from the Amazon editorial team as well as others,” she said in a statement.

“Although no literary prize can claim scientific objectivity for its judgments, one might be suspicious of a trophy given by Amazon,” wrote Guardian columnist Mark Lawson, who nevertheless concluded that after delving into the book “there is much here that might impress Pulitzer and Man Booker judges as well as the panelists of an online bookseller.”

So bucking the trend to help an unknown author gain recognition also helps Amazon’s literary taste win some recognition, too.

Or, as Schluep, one of the book editors, said of authors and their encounters with Amazon: “They realize we’re just humans who like books.”