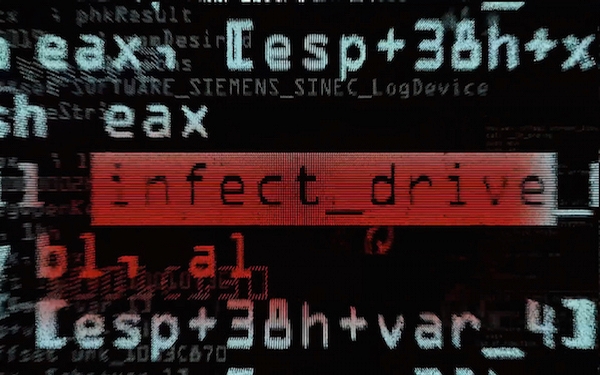 Oscar-winning documentarian Alex Gibney is typically a low-key presence, saving his passion for his films. But his voice takes a detectable upswing when he begins speaking about an unlikely subject: the nearby presence of a computer virus.

“We have it here in the office. Do you want to see it?” he said of the Stuxnet malware, his tone betraying excitement.

Gibney did not immediately show this reporter the noxious code. (It probably wouldn’t do much to a personal computer anyway, he said, unless your machine happened to be hooked up to a nuclear centrifuge.) But Gibney had reason to feel enthusiasm about the computer virus, whose seemingly ordinary bytes contain a shape-shifting danger.

The director’s new film, “Zero Days,” also marks a mutation of sorts. For a long time the prolific filmmaker has sought to pull back the veil on complex private individuals and institutions: Scientology (“Going Clear”), Steve Jobs (“Steve Jobs: The Man in the Machine”), the Catholic Church (“Mea Maxima Culpa”) and Lance Armstrong (“The Armstrong Lie”).

Even his more politically minded “We Steal Secrets,” about WikiLeaks, focused on the leakers more than government officers. (“Client 9,” about former New York Gov. Eliot Spitzer, was a public-service tale, albeit of a different sort.)

“Zero Days” takes a new approach. The film looks at the origins and ramifications of Stuxnet, the don’t-call-it-a-cyber weapon cyber weapon that temporarily brought down the Iranian nuclear facility in Natanz — and, the film argues, set off a series of more permanent changes in how global powers conduct 21st century warfare. The documentary offers a thrilling account of a weapon gone awry and a chilling view on how many more soon might.

“I wanted to make a movie about the future,” Gibney, 62, said. Invoking counsel he heard from a war correspondent while making his Oscar-winning “Taxi to the Dark Side,” he added, “‘Go not to where the attack was, but where the next attack is going to be.’”

There are plenty of assaults all around in “Zero Days,” even if none of them can be seen. In 2010, Belarus programmers discover what seems to be an anomaly: a powerful code that, unknown to computer users, has been lying in wait in their system to corrode it.

The virus — depicted on-screen with a complex, almost biological aesthetic — is unlike any they’ve seen before. The malware is Stuxnet (“Olympic Games” to its creators), a piece of code believed to be designed and launched by U.S. and Israeli intelligence forces (they have never confirmed it) to stealthily bring down centrifuges in Iran but that soon began to spread elsewhere.

Using high-level National Security Agency and other sources (the NSA reportage is spoken by a single actress whose voice is put through a digital filter to conceal identities), Gibney traces the history of the attack and its fallout. This includes denials by U.S. and Israeli intelligence officers, the temporary panic of Iranian scientists who at first couldn’t figure out what was happening to their reactor and the director’s ultimate conclusion that Stuxnet did far more harm than good.

This last bit is in part because, by revealing itself without truly crippling anything, Stuxnet only made the Iranians angry and aware without landing a fatal blow.

But this is also, the film suggests, due to what Stuxnet achieves on a precedent level. By unleashing a broadside as devastating as any physical bombing, the U.S. and Israel essentially, Gibney argues, gave any country license to use a cyber weapon. That’s a major problem. The ammunition is highly dangerous. And the rules of engagement are all but nonexistent.

In fact, the nature of cyberwarfare is so stealthy that, unlike nearly every type of conventional or nuclear weapon, those who practice it can and often do deny that an attack has even taken place.

Whether even Stuxnet would have been revealed had Israel not pushed to ramp up the aggressiveness of the virus is a question the film strongly poses, though it’s worth noting that the charge comes from U.S. officials, hardly disinterested parties.

“There’s a major challenge here,” Gibney said. “It’s not like we should say our country is a Quaker meeting house. And I’m not really a pacifist. I have great sympathy for the people trying to keep us safe. But I think for a long time our leaders tended to look for quick fixes. And they end up blowing back on us later.”

Gibney has a habit of looking under some disturbing hoods. Among his upcoming projects are a corporate crime series for Netflix that, in the spirit of his “Enron: The Smartest Guys in the Room,” makes into episodes instances of capitalist malfeasance; his first scripted drama, “The Action,” about a real-life 1970s break-in of FBI offices by everyday activists; and an expansion of his ESPN short “The Ceasefire Massacre,” about a violent 1990s tragedy in Northern Ireland with modern war on terror echoes, which he reveals will be his next documentary feature, via Amazon and the BBC. A long-rumored film about the sexual assault allegations against Bill Cosby, meanwhile, is a project he acknowledges he is “helping out” on, without offering specifics.

Though all of it sounds intriguing, none may shudder the bones in the same way as his current film. Indeed, a jittery undercurrent runs through “Zero Days” (the title refers to the hacker term for an invasion that leaves the victim with no time to respond).

Stuxnet, Gibney submits, heralds a new military frontier that could incur more pain than it inflicts. The argument against it is as much pragmatic as moral: If we can use it on them, they can use it on us.

As Gibney sat in his office on a recent afternoon, he pulled a dress shirt out of a dry-cleaning bag, preparing to make an appearance that evening on “Charlie Rose” with New York Times reporter David Sanger, a frequent talking head in the film. Interviewing print journalists is common for documentarians, who often rely on the shovel work of newspaper reporters. In this case, though, Gibney and his team had actually hit upon a scoop, which Sanger then reported as part of an arrangement on the eve of the film’s Berlinale premiere this winter. Said reveal was a big one: that Stuxnet was merely prelude to a larger plan called Nitro Zeus.

And even that may be just the tip of the iceberg. Gibney outlined a series of threats as unexpected as they are insidious (mass attacks that change personal digital communication in ways unknown to the user, like an “I love you” to an “I hate you”) as well as more common attacks on power grids and air-traffic control systems. To delve into “Zero Days” is to enter a realm of the apocalyptic (stealth Chinese attacks on dams? Russian sleeper codes in tunnels?) that would sound like so much conspiracy theory if the threat wasn’t so established.

Said Javier Botero, a researcher on the film, “The scary thing is this is all the beginning. Stuxnet was created 10 years ago. It’s now obsolete. The people working on these are working on a whole other level.”