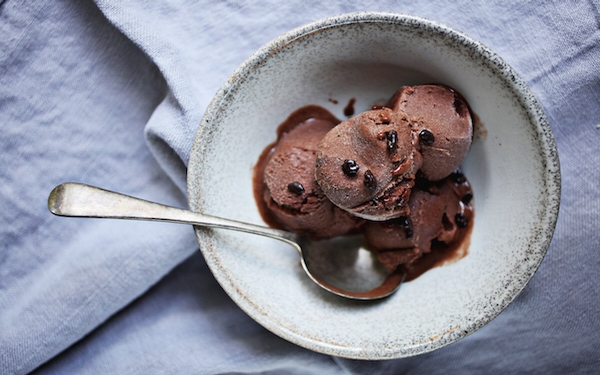 This easy Chocolate-Banana vegan ice cream from "N'Ice Cream," by Virpi Mikkonen and Tuulia Talvio, only has four ingredients and can be made in a blender. (Juli Leonard/Raleigh News & Observer/TNS)

In the last 20 years, I’ve eaten a lot of vegan ice cream — some of it good but much of it bad.

Problem is: I don’t cook. I started following a vegan diet (no meat or dairy products) as a teenager. I ate a lot of vegan junk food in college. I would mainly survive on hummus and toast if not for the area’s great chefs and my boyfriend, who is a skilled home cook.

So, one might think taking on this vegan ice cream quest was a tad ambitious for someone like me. But I have my lovely cook. I imagined we (OK, he) would make these ice creams and I would photograph them. I bragged: We just need three recipes!

He pored over the books, purchased an ice cream maker and a high-powered blender, and shopped for ingredients. I brought my taste buds (and my camera) to the table.

Along the way, we discovered a few truths about making good homemade vegan ice cream.

First, the foundation has to be a good creamy base, which can be a challenge without dairy products. It can be made with full-fat coconut milk, homemade cashew cream or even frozen bananas.

Second, vegan ice cream can be incredibly expensive to make; vanilla beans and guar gum, a natural thickening agent derived from guar beans to aid in structure and binding, are not cheap.

Based on our trials and errors involving seven batches and five recipes, we came up with three that range from cheap and easy to expensive and challenging — but all three taste great.

Frozen bananas add sweetness and creaminess as the base of this easy blender ice cream. As the authors suggest, go for ripe or overripe bananas for a richer flavor. From “N’Ice Cream: 80 Recipes for Healthy Homemade Vegan Ice Creams” by Virpi Mikkonen and Tuulia Talvio, (Avery, 2016).

The two cans of full-fat coconut milk help create a creamy custard base. The author suggests the recipe as a good base for trying your own flavors in substitute of the blackberries. From “Food52 Vegan” by Gena Hamshaw, (Ten Speed Press, 2015).

Homemade cashew cream and coconut milk serve as the base for this flavorful ice cream. Although the recipe has multiple steps, the nuanced flavors are well worth the work. From “Crossroads” by Tal Ronnen with Serafina Magnussen. (Artisan Books, 2015).

2-3 tablespoons unsweetened almond milk (or other plant-based milk), if needed

Peel the bananas and cut them into small coins. Put the bananas into an airtight container and freeze for at least 4 hours, or overnight.

Combine the bananas (and other fruit) in a blender and pulse until smooth, scraping down the sides of the blender as necessary. If the mixture is too thick, add the almond milk to achieve the desired consistency. Add flavoring and sweetener, if using, and blend until combined. Scoop into a bowl, serve, and enjoy.

The two cans of full-fat coconut milk help create a creamy custard base. The author suggests the recipe as a good base for trying your own flavors in substitute of the blackberries; try lime juice and zest, strawberries, cocoa powder and dark chocolate chunks, or a ribbon of peanut butter. From “Food52 Vegan,” by Gena Hamshaw, (Ten Speed Press, 2015).

The day before you make the ice cream, refrigerate or freeze the ice cream maker basin according to the manufacturer’s instructions.

When the basin is ready, put coconut milk, sugar, seeds, salt and blackberries in a blender and process until totally smooth, 1 to 3 minutes.

Transfer the mixture to the ice cream maker; or, if it warmed up during blending, you may want to cool it down in the fridge first. Let churn for 20 to 25 minutes, or however long the manufacturer’s instructions indicate.

Transfer to a freezer-safe container and freeze for a few hours before serving.

This vegan ice cream uses cashew cream and coconut milk. It also has a versatile base recipe: Omit the basil, for example, add another vanilla bean, and you’ll have classic vanilla ice cream. It’s best to make the custard base 24 hours before churning to allow the flavors to develop and intensify. Guar gum is a natural thickening agent derived from guar beans. Often used in gluten-free baking to aid in structure and binding, it also keeps ice cream smooth by preventing ice crystals from forming. Bob’s Red Mill is a popular brand that can be found at Whole Foods and many other grocery stores. From”Crossroads” by Tal Ronnen with Serafina Magnussen. (Artisan Books, 2015).

One 15-ounce can coconut milk

1 vanilla bean, split and scraped, or 1 tablespoon vanilla bean paste, such as Nielsen-Massey

Combine the arrowroot and guar gum in a small mixing bowl. Pour in the almond milk to make a slurry, whisking vigorously to ensure that it is smooth with no lumps. Set aside.

Combine the cashew cream, coconut milk, sugar, coconut oil, vanilla seeds and pod, and salt in a medium pot over medium-high heat and whisk constantly until the mixture comes to a gentle boil. Reduce the heat to medium and simmer gently, stirring, until the sugar is dissolved, about 5 minutes. Ideally, the temperature should be 175 degrees (just scalding). Reduce the heat to medium-low and simmer gently for 2 more minutes.

Slowly pour the arrowroot slurry into the pot, whisking vigorously to prevent any lumps from forming. Simmer for about 5 minutes, whisking often, until the mixture is thickened and the raw starch taste is cooked out; taste to be sure there is no starchy flavor. Strain through a fine-mesh sieve into a large bowl.

Crush the basil leaves gently with your hands to help release the oils, add to the ice cream base, and stir gently. Let the mixture stand at room temperature for 1 hour to infuse the basil flavor into the base.

Pour the ice cream base through a fine-mesh strainer into a bowl or other container, pressing gently on the basil leaves to extract the flavor; discard the basil. Cover the ice cream base with plastic wrap, pressing the plastic wrap directly against the surface to prevent a skin from forming. Refrigerate for at least 4 hours, preferably 24 — the longer the base sits, the better the flavor.

Churn the ice cream base in an ice cream maker according to the manufacturer’s directions. When it’s done, the ice cream will be the consistency of soft-serve. To harden the ice cream fully, freeze it in a covered plastic container. The ice cream keeps for up to 3 weeks.