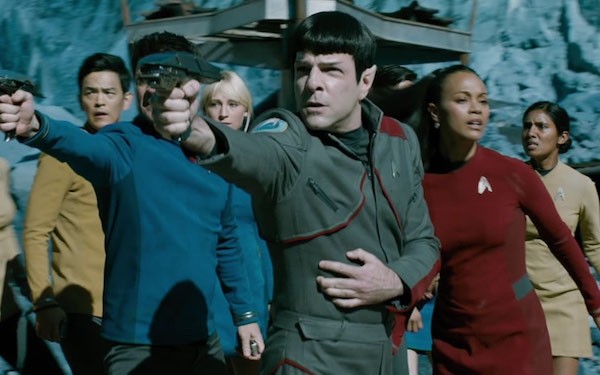 No need to fret everyone. Summertime can finally be celebrated, for the latest of installment of the Star Trek franchise is here. And just as its name implies, it goes beyond the expectations of our imaginations and hits upon even more exciting, blockbustery goodness. At least I think it does, because this is the first Star Trek movie/anything I’ve seen in its entirety. So bear with me, undyingly loyal fans, and maybe we can work together on this one.

While my scope of the narrative arc may be a bit hazy, only knowing the most basic of character background and whatnot, I can say somewhat assuredly that the tropes of the Star Trek machine are alive and well in Star Trek Beyond, which simply takes the crew of the U.S.S. Enterprise into deeper, darker, and somehow even more uncharted territories of space. And who better to have behind the wheel behind Captain Kirk than director Justin Lin who has helped driven the Fast & Furious franchise to the top of the box office again and again?

This time around, their mission comes whilst stationed at one of newest Federation territories called Yorktown, which is way less New English than it sounds. Situated inside a somewhat precarious giant glass orb, Yorktown is a beautiful, peaceful hub of winding highway systems and commerce infrastructure. Of course, Captain Kirk (Chris Pine) and his crew don’t get to linger too long, because an unidentified craft with a lone refugee falls on their doorstep, pleading to come to an unexplored nebula where they can help recover her lost crew and ship.

In a somewhat frustrating turn of events, they accept her plea for help without any questions of her potential motives or any hesitation at all, despite how risky everyone makes it sound. Alas Kirk and Co. accepts, and so the Enterprise shoots off into the unknown frontier.

Naturally, it turns out horrendously, as a crazy scary swarm of tiny ships bombards the Enterprise, and well, after a really cool, but tragic battle scene, the ship goes down along with all of its crew. The mastermind behind it? A Joss Whedon-esque alien named Krall (Idris Elba) who has a mysterious twinkle in his gross green eyes.

And this is where Beyond get its right, dispersing its most beloved characters across a hostile landscape, forcing them to rely on their most basic skills to survive and hopefully regroup and kick ass as a unit. We get to see each member of the ship shine in their distinct, and sometimes overly, kitschy ways—I’m looking at you McCoy (Karl Urban). A little bit of banter from Scott (Simon Pegg, also the writer) and groovy teamwork between Sulu (John Cho) and Uhura (Zoe Saldana) Needless to say, it was good to see Chekov (Anton Yelchin) get some solid screen time as well.

Of course, it may be the new blood that is most exciting this time around, and her name is Jaylah (Sofia Boutella), another lost soul on the planet who just wants to go home. But by lost soul I really mean a warrior with some wicked fighting skills and who happens to be a master of holographic illusion. The crew was lucky she found them.

As for Elba as the engrossing villain Krall, it’s probably unsurprising that he rocks that role with usual overflowing cool. Even his Britishness provides the character with an increasing air of menace, but also some poise. It’s bizarre, but it works.

And the effects? Bonkers of course. Lin and his team created an energy and scope in this unique universe that easily becomes a mesmerizing force. While I won’t say the 3D was exactly memorable at all really, the visual texture was very much on point.

As a general newbie to the world, I found the earnest emotional weight that anchors the main crew to be the element that kept me fastened in my seat the duration of Star Trek Beyond. As it opens, we see both Kirk and Spock (Zachary Quinto) conflicted with individual intentions to leave the Enterprise, something that they have to grapple with the entirety of their struggle against Krall and his minions. But they move past grappling. They embrace the moments of being alongside their beloved teammates in order to endure, because that’s the power that moves them. I don’t know about you, but that’s a frontier I can get behind.

STAR TREK BEYOND hits theaters near you Friday, July 22nd.