Equity: Finally, a Wall Street movie about women by women 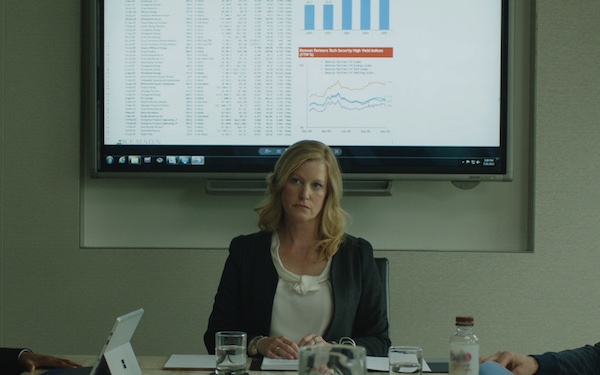 The Wolf of Wall Street, Wall Street, Margin Call, and even Trading Places—when you look at these film titles, what’s the first thing that comes to mind? Yes, they are obviously all about the financial business world in all of its drama, bombast, and often comic absurdity, but what should be even more interesting, or at least distressing, is the fact that not one single woman is either at the forefront of the narrative nor of the cast themselves.

That’s why Equity, directed by up-and-comer Meera Menon, is singular in its understanding that the time has come for women’s ambition and stride for success to not only be represented, but also normalized. “Equity” after all has two meanings, and Menon’s crew wants to unearth the simple fact that fairness and impartiality is the other side of the coin to the otherwise corrupt, money-hungry one.

When we look at the broader story, Equity is about a senior investment banker Naomi Bishop (Anna Gunn, “Breaking Bad”), who, unlike her male counterparts and despite her career’s worth of success, has to apologize for any ferocity or ill temper that may come out when handling business. That’s why Cachet, the latest hot commodity in the Silicon Valley tech industry, is hesitant about letting her head their IPO, but after proving her and her VP Erin (Sarah Megan Thomas) are uniquely savvy when it comes to these kinds of deals, Cachet extends its hand in partnership.

Of course, it wouldn’t be Wall Street without a little bit of scandal thrown in the mix, and that’s where Naomi’s old friend Samantha (Alysia Reiner, “Orange is the New Black”) comes in. Now a lawyer specializing in white-collar crime, Sam quickly sniffs something fishy going on behind all the firewalls of the now seriously regulated secrecy codes of Wall Street, and is willing to muddy her friendship with Naomi if it means bringing big money-hungry egos to justice. Now, Naomi must scrutinize her trust in her comrades and colleagues, as well as those without the industry who are looking to throw her off course.

Okay, so a lot of that financial lingo isn’t exactly the sexiest thing to get you hooked on a movie, and that’s entirely understandable. Really, the wider narrative strokes in Equity aren’t even that enticing. What is, however, is exactly how Equity came to fruition in the first place, and that place happens to be Broad Street Pictures.

Founded by two of the film’s leading stars, Reiner and Thomas, Broad Street is a company pledged to making the mostly frustrating trek towards equality for women in all industries through the medium of film. Equity was their maiden voyage and would prove if they had a viable model that investors could get behind. Turns out, it was.

By reaching out to numerous big wigs on Wall Street, including both men and women, Reiner and Thomas looked for voices and insights that would understand their mission via this movie, and they were met with many eager participants. While mostly women responded with the enthusiasm they wanted, willing to lend as much help as they could to get their stories told, one man did step in as well—though he is the only one who wished to remain anonymous, which remains simultaneously distressing and telling of the plight of the movie’s narrative itself.

While all that backstory is unique in its own right, we still have the actual movie to consider. Similar to The Big Short (2015), which takes subject matter that might be considered dull to those who don’t find the housing crisis to be particularly captivating and manages to make it digestible and even exciting, Equity finds a way to make incalculable wealth and number-crunching as intriguing as possible, for the most part at least.

Mainly that is due to its super solid cast, especially Gunn finally taking a leading role after rocking “Breaking Bad,” where she gets to bring a glorious commanding stance in front of the camera. She seems to have the perfect focused gaze for someone who is unapologetically at the top of her game, and while also giving us plenty of room for sympathy in her character, which is refreshing especially in comparison to other Wall Street films that have utterly deplorable main characters who are nearly impossible to root for.

We can also thank some careful editing by Andrew Hafitz who provides enough energy and tension to move the story swiftly along to make us feel swept up in something, even if that something happens to be IPOs or hedge funds. While the scripted narrative sometimes cruises by some plot points without coming back to them, the rhythm of the story allows us to forget about the minor mishaps as the drama unfolds.

What remains special about Equity is the spirit of progression that allows us to push past some invisible barrier that for so long has kept the more numerous half of our country underemployed and underpaid. If Broad Street Pictures can keep that momentum going, unapologetically pursuing the stories that many claim they don’t want to hear, then that’s something worth investing in.

EQUITY opens Friday at The Landmark in West Los Angeles and The Arclight in Hollywood. Q&A's this weekend with Anna Gunn and director Meera Menon. Purchase tickets here!