Moving yet not quite memorable, The Land shows us the dark side of skateboarding 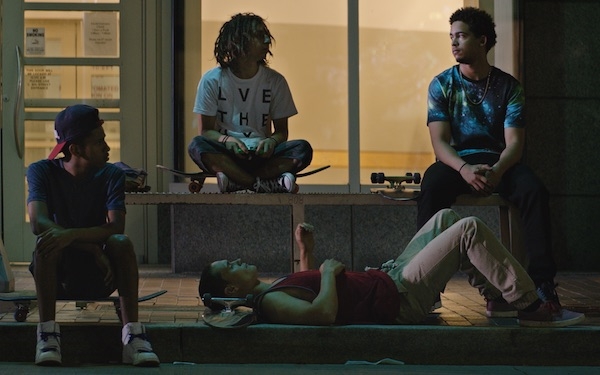 Tricks, graffiti, punk kids loitering underneath highway bypasses probably getting stoned, drunk, and doing nothing with their life: that’s probably what a lot of people think of when they think of the world of skateboarding. While that certainly isn’t true of all skateboarders by any means, The Land wants to show a different side of that particular story, or at least, the version where the kids want to get out of that grim cycle and become something more through the sport itself. While that intention is clear and the motives are good, the otherwise dramatic genre of small town kids going against big odds is unfortunately outshined by other similar tales, tales with punch, a grip that can’t let go, while The Land simply salutes and let’s you walk past with little to remember it by.

Nearly a month since Go Skateboarding Day, a national holiday usually falling on June 21st celebrating the spirit, skill, and passion that drives the increasingly popular sport, Steven Caple Jr.’s The Land seemed well-timed and with enough intriguing creative power behind it to make it an effective small, yet evocative contribution. With Nas on as producer, we certainly got that on the musical side. Unfortunately, ebbs and flows in the story itself are only slightly ebbing and flowing, giving up the tension that would have otherwise fulfilled the basic story that was full of potential.

That story is of four best friends Cisco (Jorge Lendeborg Jr.), Junior (Moises Arias, Kings of Summer), Patty Cake (Rafi Gavron, Nick & Norah’s Infinite Playlist), and Boobie (Ezri Walker) who live in inner city Cleveland where money is tight and time is left for the killing. Mostly that time is filled with skateboarding, and trying to make a quick buck whenever possible, and in their case this means stealing cars from unsuspecting drivers. Things go unexpectedly wrong one night, however, when one of the stolen cars is found to be packing large amounts of MDMA in the trunk. While some members of the crew want nothing to do with it, Cisco sees a much faster track to not only being able to support their families, but also to finance the costly entrance fees in skateboarding competitions—really the only way he can see them escaping Cleveland.

So what does he propose? To start pushing the drugs, of course, and while that goes well for a while, the thugs who they stole from, which includes a mean head honcho in the form of a white suburbanite lady aptly named Momma (Linda Emond, Julie & Julia) hot on their trail and thirsty for revenge.

What happens next is mostly predictable, and that’s really the source of the problem with The Land. While as a whole project it’s generally well-made and well-acted, the lingering taste in your mouth, is just, well, forgettable. For example, I can’t exactly recall a climax. I do remember an especially tragic moment—which admittedly was filmed very nicely—but in retrospect there is little I can grasp in the scope of similar story structures that had something inarguably unique.

Like I said previously, however, there is a lot of good in The Land. Lendeborg Jr. as Cisco leads his crew with a surprising amount of confidence for a newcomer, and luckily we’ll get to see more of him in the new Spiderman reboot. His power of connecting with the actors around him prove a maturity that’s necessary to a role like this, one in which his character becomes steadily more unlikable as he becomes dragged into this underworld of drugs, crime, and greed, despite the pleas from his closest friends.

Kim Coates (“Sons of Anarchy”) is another solid contribution in this often-unfair world, playing Cisco’s non-biological Uncle Steve, a rundown deli owner and former addict. Their relationship is complicated, built on tragic foundations, but the reliance each has on the other is inarguable, and both actors fully commit to that bond. Another notable mention is the marvelous singer Erykah Badu who gives a small, yet somberly sweet take as down n’ out woman taking refuge in Steve’s restaurant, and also contributing some beautiful pieces on the soundtrack.

It’s the main antagonist, however, this Momma, who really stands out. A middle-aged white woman who moonlights—or sunlights?—as a farmer’s market grocer, she packs a pocket full of menace and intimidation that is consistently surprising.  In the midst of the precarious crime bubble she helped build, Emond rarely waivers her intense stare, even when a loaded gun is pointed in her face.

That’s why The Land is frustrating, because it has so many small pieces right, but ultimately doesn’t use them to its full advantage. Similar to an orchestra, the ensemble of the production has to come together to bring that something special to the surface, and while Caple Jr. shows a special understanding in creating characters, some of the other instruments found themselves drowned out and forgotten.