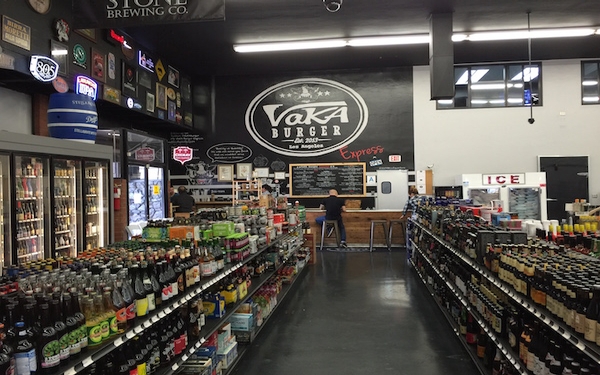 I’ve heard some news lately about the resistance to the gentrification of Boyle Heights and decided to take a look at what is going on over there.   For those of you not familiar with the community, Boyle Heights is mainly a Mexican American neighborhood east of Downtown Los Angeles.  Back in the first half of the 20th Century, it was an ethnic melting pot of Jews, Japanese, Latinos, Yugoslavians, Portuguese and Russians.

While waiting in my car for my wife, who was checking out a neighborhood thrift shop, my curiosity caught the best of me as I stared at the Ramirez Beverage Center located directly across the street from where I was parked.  The Center is a successful business in the community selling a vast selection of beers, alcohol and sodas.  Tucked in the Southwest corner of the store is Vaka Burger, an express burger joint that grabs your attention as you browse the aisles for the spirits of your choice.

Vaka, which means beef in Spanish, is the brainchild of chef Aaron Perez and Esmeralda Sanchez, his fiancée and business partner. Peres who was born and raised in Boyle Heights, is a graduate of the Le Cordon Bleu School of the Culinary Arts.  He worked for the Food Network, Wolfgang Puck Catering and earned his stripes in the kitchen in renowned restaurants such as La Cachette, Rivera and Providence.  You may have seen Aaron on “Cutthroat Kitchen,” a cooking competition show also on the Food Network, where a player, in addition to being a good chef, must be able to outwit opponents to win.  And, Perez did just that. With his Boyle Heights streets smarts and culinary background, Perez won “Cutthroat Kitchen” and pocketed a nice financial windfall.

Debuting a gourmet burger concept at the now closed Tested L.A. in the residential neighborhood of Glassell Park, Perez’s creations gained traction with foodies and lead to him and Sanchez taking the “Cutthroat” winnings and parlaying them into the Vaka Burger food truck.  The grass-fed burgers and truffle fries further caught on in Los Angeles as their food truck canvassed various areas of the city, dolling out burgers fitted with house-made everything.

Eventually though, the next step in the progression of Vaka Burger would be to park the truck and settle the business down. When it came time to lay roots, Perez and Sanchez returned to Boyle Heights and anchored themselves to the Ramirez Beverage Center, which has been in business for over 35 years.

The Ramirez-Vaka relationship compliments each other in multiple ways, one of which is how a successful business in a community, where the median income is $33,000.00 ends up making space for a pair of young local entrepreneurs to sprout up and shoot for the American Dream.  The other is to make money.  When you walk into Ramirez, you’ll discover an amazing selection of beers from around the world, local breweries and American brands.  On the other side of the store is a vast selection of cold sodas.  Every liquor store on the planet sells snacks but how many have a gourmet burger joint on the premises? Most likely, none. The downside, you can’t buy alcohol and drink onsite at Vaka Burger Express. However, with craft soda flavors such as Butterscotch Root Beer, you will surely find a tasty beverage to wash down your burger. Also, you can always pick up a 6 pack with your to go order.

Vaka Burger Express stands out in the store with its big black and white signage. The restaurant seats 6 people at the counter and another 6 to 8 in a corner area.  The staff is extremely friendly and knowledgeable. On my Saturday visit, a young Latina greeted us with a big welcoming smile and proceeded to walk us through the restaurant’s menu.  Based on the pictures on Yelp, I ordered the house made beer batter tempura Maui onion rings. The rings are a huge flavorful serving (enough to share) with a crispy but not crunchy texture that is served with a Sriracha ketchup on the side. As for fries, I’ll have to save the popular Dirty Fries, thin Yukon gold potatoes, Russian dressing, caramelized onions, feta and garlic aioli for my next visit.

There are up to 9 burger choices on the menu including a vegetarian option that substitutes a beef patty with an organic Portobello mushroom.  All burgers are served on a Brioche bun and the patty is a 100% grass-fed, homemade blend of three signature cuts of beef.  The burger names are eye catching and the descriptions are mouth watering.  With names, such as the OG, VakA, El Porky, Los Altos and Pato Loco yo, you get a Chicano chef’s culinary training merged with his proud Hispanic heritage.

My wife and I settled on a Truff Burger which is layered with baby rock arugula, New York sharp cheddar cheese, white Truffle oil, caramelized Firestone onions and roasted garlic aioli.  We also had a Blu Burger, which includes blue cheese, Balsamic glaze Crimini mushrooms, garlic aioli and living organic butter lettuce. We split both burgers in half and shared them.  They were amazing. The burgers are cooked to perfection, flavorful and juicy. Even more importantly though, the burger and fixins are equally balanced and don’t overwhelm each other. This results in an even-handed explosion of tastes in your mouth that represents the best of what Aaron Perez brings out in his food.

What’s next for Vaka Burger? Look for a new location in Downtown L.A. coming soon and in the Loge section of Dodger stadium in 2017. In the meantime, visit Vaka Burger Express at 2765 E. Olympic Blvd. in the Boyle Heights neighborhood of Los Angeles. (323) 265-1111.  Check them out online at VakaBurgers.com (Please note – new website coming soon but the menu is up there.) or via Facebook -  @VakaBurgers,  Instagram – @VakaBurgers, and Twitter -  @VaKABurger