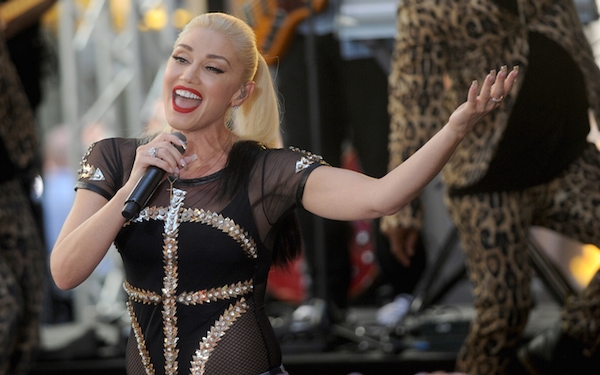 To Gwen Stefani, her new album “This Is What the Truth Feels Like” was more than just a chance to create music.

In a sense, she says it saved her life.

That may sound a tad overdramatic. But the new album certainly reflects what has been a rollercoaster ride of emotions and upheaval in Stefani’s life over the past couple of years — one that has taken her to some serious depths and back to pure exhilaration.

The events in Stefani’s recent life have been well-chronicled — in the mainstream media, as well as in tabloids and online.

Around February 2015, her 13-year marriage to Gavin Rossdale (lead singer of the band Bush and father of her three sons) was coming to an end, and sent Stefani into a swirl of sadness, anger and depression. She responded by doing what she knew best, writing songs. Along the way, she started connecting with country star Blake Shelton, one of her fellow coaches on the television show, “The Voice.”

Shelton was going through his own divorce from his wife, country star Miranda Lambert, and the two bonded over the similar life-changing events they were experiencing. The Stefani-Shelton romance has since gone public, and “This Is What the Truth Feels Like” is heavily informed by the saga.

“Music has to be from real life and it has to honest and with the right intentions for people to connect to it,” Stefani says during a recent teleconference interview. “And this record, that’s what this record was. And so I just feel grateful…to have to go through the pain to get to this place, because that’s sometimes what you have to do.”

Several songs on “This Is What the Truth Feels Like,” such as “Naughty” and “Red Flag,” hint at secrets and betrayals (presumably by Rossdale), while “Used to Love You” is the sound of a relationship ending and a woman ready to move on. That song, in a sense, sets the stage for several other songs (“Rare,” “Where Would I Be?” and “Truth”) that revel in the excitement of new love and emotional renewal.

Musically, the new album isn’t as bouncy and bubbly as much of Stefani’s previous music, but songs like the tempered ballads “Misery” (the current single), “Truth” and “You’re My Favorite” are rich musically. And the album gets a measure of energy from the sunny “Make Me Like You” and the slyly playful “Naughty.”

The backdrop that produced “This Is What the Truth Feels Like” has some direct parallels to the album that first introduced Stefani to a large audience — “Tragic Kingdom,” the 1995 release by her band, No Doubt. Featuring the hits “Just a Girl,” “Spiderwebs” and “Don’t Speak,” it sold 16 million copies worldwide.

Written in the wake of her breakup with the bassist in that band, Tony Kanal, it included songs that were inspired by the pain Stefani was feeling, with “Don’t Speak,” a prime example of a song that captured the breakup experience. Stefani says she sees parallels between the two albums, which involved simply pouring her emotions into her songwriting.

“I’m devastated that my best friend (Kanal) doesn’t want to be with me anymore,” Stefani says. “So it was, like everything I lived for was, I was being abandoned, do you know what I mean? So I wrote these songs.

No Doubt’s follow-up album, 2000’s “Return of Saturn,” was well-received critically, but was a commercial disappointment. But the group bounced back in 2001 with “Rock Steady,” an album that produced two Grammy-winning singles, “Hey Baby” and “Underneath It All.”

Following that album, No Doubt went on hiatus and Stefani launched her solo career. She made an eclectic debut with “Love. Angel. Music. Baby.” in 2004 that gave her a hit single with “Hollaback Girl.” She returned two years later with another successful solo effort, “The Sweet Escape.”

Stefani then turned her attention back to No Doubt. But she struggled creatively and it wasn’t until 2012 that the group’s comeback album, “Push and Shove,” arrived. By that time Stefani had started to find her creative confidence again, and that feeling was furthered after getting pregnant with her third son with Rossdale, Apollo, and then getting the offer to be a coach on “The Voice.”

“I gave birth to him, and four weeks later, they called me to do ‘The Voice,’” Stefani says. “And I just kind of went, ‘Yeah, let’s go.’ I didn’t even know what I was getting myself into. And that was the beginning of the end of that insecurity. OK, I was on the show. I had this new baby. I’m around all this music. I’m looking at my life. I’m looking back at myself, at what I’ve done, you know what I’m saying? Like it made me think about how many great songs I’d written and how much I’d accomplished and how did I do it, you know what I mean? And so my confidence was coming back slowly. And then, I guess at a point when things started to kind of, like in my life unraveled last year, it’s sometimes really bad happens just so that really great things will happen, and I think that’s what happened to me. It was like a wakeup call…Get back on track and stop being insecure about writing and your gift and (do) what you’re here for, and stop being selfish and share what you’ve got.