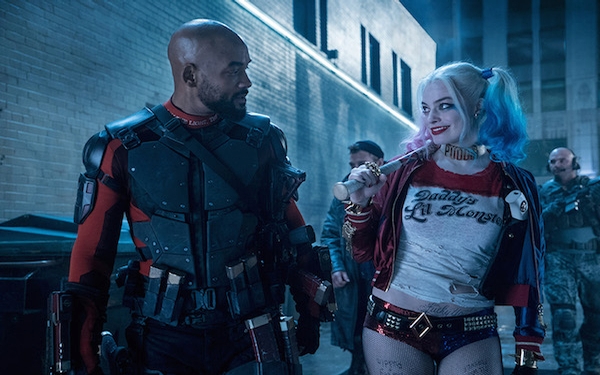 Harley Quinn Smith, 17-year-old daughter of film director Kevin Smith, has gotten comments about her distinctive name ever since she can remember.

“‘Oh cool, you’re named after Harley Davidson,’” she said people often respond after she introduces herself. “‘Are your parents huge motorcycle enthusiasts?’ And I’ll say, ‘No, no that’s not it. But you’ll get it one day.’”

That day has come.

And three months before the movie premiere, the trades were writing that a Harley Quinn spinoff series was in talks at Warner Bros.

The chipper comic-book character with a voice like Marisa Tomei in “My Cousin Vinny” and a love for Batman nemesis the Joker has gone mainstream.

It was a pigtailed army of makeup-smeared cosplayers at back-to-back Comic-Cons in 2015 and 2016 that tipped off the new squad.

“We went to Comic-Con last year, and there were so many Harley Quinns,” Robbie said. “We hadn’t even finished shooting the movie by that time and there weren’t any trailers out or anything. This year was the most exciting. Everyone knew the details of the costume now and got really specific with it. I even saw guys dressed up as Harley Quinn.”

Quinn may have started off playing second banana to the legendary DC comics villain, but over the years her presence has grown.

In 2015, DC dedicated the entire month of February to Quinn with 22 variant comic covers. The No. 1 searched Halloween costume for 2015? It was Harley Quinn, outranking “Star Wars” characters and Minnie Mouse.

Is Harley Quinn the next comic-book blockbuster movie star?

Quinn cartwheeled into Gotham looking like she tumbled out of a deck of cards.

But her first appearance was not in the comics. It was in the 1992 noir cartoon series “Batman: The Animated Series.” Dreamed up by Bruce Timm and Paul Dini, she was originally concocted as just another member of the Joker’s cartoony gang.

But Dini realized there was more to Quinn than the average henchwoman. Squealing trademarked lines of love at her beloved “Mistah Jay” or “Puddin,” the love between the Joker and Quinn, who hid her identity behind a traditional harlequin hat and simple red-and-black leotard, was fraught with neglect, robberies, mayhem, violence and abuse.

Through it all Quinn stayed oddly, and sometime spookily, cheery.

“She was a counterpoint to what was going on with Batman,” Dini explained. “She just became this great device to lighten things up when it got a little heavy.”

Quinn brought the fun, something fans have been asking from the DC movie universe since the premiere of “Batman v Superman.” But she also helped ground Gotham. Despite jumping out of cream pies and being able to arabesque effortlessly into the air, the fact that Quinn was more of a real, flawed character made her much more relatable than her bad guy counterparts. Audiences felt for her, and her popularity grew.

“She became a character who is a little bit more sympathetic than some of the other villains around her,” Dini said. “When you’ve got a character like Riddler or Penguin or even Catwoman, they’re motivated by what they are — thieves or gangsters or something like that. With Harley she really is a wayward soul who got swept into this out of her own passion and her own unwise choices. So she’s trying to figure out how she belongs in this world, and if she should even be in the world.”

“What’s appealing about Harley is that she makes poor decisions. She is impulsive and she makes mistakes,” Letamendi said. “We like that about her, that’s relatable and we forgive her for that. And we want her to be resilient against the Joker’s abuse, against things that happen to her. We want her to overcome and we want her to learn from her mistakes.”

In more recent “Harley Quinn” comics, however, she has a fresh new perspective. Quinn’s kicked Joker to the curb, moved out of Gotham to Coney Island, got a new job at a senior citizens center and works out her aggression with a Roller Derby team.

“We wanted to take her out of Gotham because if she had stayed in Gotham she still would have been dealing with all the Gotham characters, Batman and Joker,” co-writer Amanda Conner said. “She would have been a supporting character in her own book. … What better place for a Clown Princess than Coney Island?”

“It’s probably the healthiest thing for a character to evolve,” said co-writer Jimmy Palmiotti. “We’ve definitely taken lot from the the cosplayers. Amanda keeps changing the costume every issue.”

Was it difficult for Ayer to convince Robbie to don the dip-dyed pigtails of Quinn? Not really: The allure of working on this character with Ayer paired with their plans for the character were enough.

“There was no script,” Robbie said. “No one else was attached. And I hadn’t read the comics before. So I really didn’t have any context for it, other than working with David (Ayer), which I wanted to do so badly. I was ready to sign on just on that premise alone but then he described two different Harley scenes and I said, ‘Oh my God, I’m in. I’m so in.’”

One scene that sealed the deal?

It was Harley Quinn, alone in her prison cell, hanging upside down. “(Ayer) described that scene and her unraveling from the ceiling sort of like a bat sleeping upside down,” Robbie said. “It was so cool.”