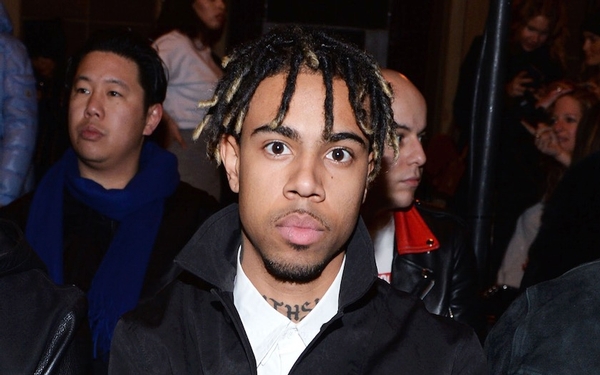 Despite years of acclaim that have drawn the attention of Kanye West, Beyonce and Jay Z, Vic Mensa still sounds like an artist who has something to prove — not just to the public, but to himself.

Only 23, Mensa has been a key member of genre-hopping indie band Kids These Days; released a lauded mixtape, “Innanetape” (2013); collaborated on tracks with West, Skrillex and Gorillaz; signed a deal with Jay Z’s Roc Nation; and recently opened a show for Beyonce at Soldier Field. But it appears his best work is still ahead of him, judging by the standout tracks on his latest EP, “There’s ALot Going On” (Roc Nation). It contains some of the more powerful and personal music of the South Side Chicago rapper’s career.

Among its most potent tracks is “16 Shots,” which sounds like both a eulogy and a shout of resistance in the wake of Chicagoan Laquan McDonald’s shooting death at the hands of police in 2014 and the release of a video more than a year later revealing its shocking details. The video prompted protests in the streets of Chicago and shouts of “16 shots!” Mensa participated in some of those rallies, and the images and words haunted him.

“That’s a song that I’ve been wanting to write since I was 16 years old,” he says. “But I didn’t find the right canvas to vividly depict those feelings until I heard those chords and beats (by producer Papi Beatz). I grew up at odds with police from the time I was 11, 12 years old. … So for more than half my life, there has been tension with police — I felt mistrusted, disrespected. As I spent more time on tour and in the studio, my interactions with police have been more limited. It was always on my mind, thinking about complexities of our oppression by police forces nationwide, and how can we make it better. But it took (the slayings of) Laquan, Eric Garner, Michael Brown … to put me face to face with the police again. I heard those chants on the street — ‘16 shots!’ — and it sparked something in me.”

Mensa’s first major public performance of the song was as the opening act for Beyonce’s first Soldier Field concert May 27, where there were numerous police officers on duty. But he didn’t hold back. “I feel right now that’s a song I have to do,” he says. “I’m in Chicago, I have this small window of time, what can I say with it? I feel like, more than ever, ‘16 Shots’ will resonate with a lot of people here.”

And he says he will continue to perform the song in shows. “I’ve been a target of police since childhood, and if saying things that I feel I have to say from my life experience reinforces that, so be it,” he says. “I get searched twice when I go to airports, I get pulled over for driving a nice car because I’m young and black. I’ve got bigger issues than being targeted by police, because I’ve always been targeted by police. I’m clean, there are no drugs on me. At this point in my life, I’m so on my square. I know I’m here with a mission, and I haven’t let things derail me from that.”
In “Shades of Blue,” his anger turns to the mismanagement of the Flint, Mich., water crisis and the media’s haphazard coverage of what he views as a “trampling” of human rights.

But Mensa didn’t want the EP’s message to be all about us-and-them confrontation. He offered a free download of “There’s ALot Going On” to anyone who pledged to vote in November, in a partnership with Respect My Vote! and the Hip Hop Caucus.

“I wanted to put some power in the hands of the fans,” he says. “The things I’m talking about on the EP are me fighting against power, me trying to find the power in my existence. I’m trying to make the experience bigger than just music or me as an artist, and give initiative to the people listening to make some of the changes that I ask for.”

To confront some of these demons bedeviling his community, Mensa had to first confront his own lifestyle, a struggle he documents in scathing, self-incriminating detail on the EP’s title song. It documents two years when he was consumed by drugs, drink, jealousy, infidelity and domestic abuse in the wake of the 2013 breakup of his former band, Kids These Days. Even as Mensa signed with Jay Z’s label and worked on the follow-up to “Innanetape,” his life was in disarray.

“I had to face those things head on,” he says. “For me, rap music is such a direct extension of my heart and soul that I can’t leave out the fact that it’s a mirror. At the end of the day, I’m going to go to sleep and know what happened. This is my way of coping with things, and making sense of things. I realized a lot of things that I did reflected the hurt I felt from the band’s rejection. I never put those things together, but writing it down, it started to make sense to me, like a puzzle.”

His decision to tell all about his stumbles was not made lightly. But he felt it was a necessary step, and it contributed to his growth not just as a person, but as an artist.

“The best advice I got about writing came from (singer-songwriter) Mike Posner,” Mensa says. “He told me to tell as much truth as you can in every line. That sat with me as I’m writing this year, the hard truths, the things that make me question, ‘Can I even let people know that?’ ‘Can I put that out?’ Those are the things I end up standing behind. My aim in rapping and writing is to be as truthful as possible, sometimes even when I feel like I crossed the line and it might upset people. It has happened multiple times recently. People ask me, ‘How could you say that?’ If it hurts you, I have to ask for forgiveness, but I have to be honest.”

Mensa says he had to do some serious personal housecleaning before he could get to the stage where he could write such brutally direct lyrics and music. “The EP was made while I was writing music for the next album,” which he says he hopes to have ready this year. “I made another entire album in the last couple years, but I was on drugs, and it didn’t feel real to me. I started fresh after turning my life around. I’m in a space where I’m more clear and focused than I have been in a long time. I feel like myself for the first time since, I don’t know, age 17. Right now I’m tapped into who I want to be, where I want to go. I’ve been 100 percent sober since January, so for the last six months, I stopped doing drugs and I’m not going to do drugs anymore. I like thinking with a clear head, I’m comfortable in my reality, as difficult as it can be sometimes.”
———
©2016 Chicago Tribune
Visit the Chicago Tribune at www.chicagotribune.com
Distributed by Tribune Content Agency, LLC.