Party hardy with authentic Brazilian fare for the Olympics 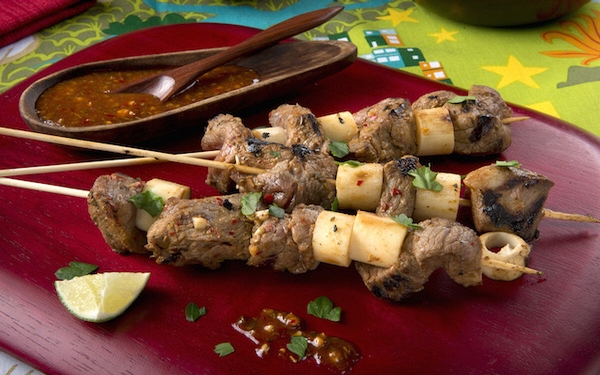 Since May, the U.K.’s popular Cabana chain has been hosting a pop-up restaurant on a beachy outpost of trucked-in sand, and the carnival atmosphere will run through the end of the Paralympic Games in September.

The menu includes chimichurri steak with rice and black beans and what Lizzy Barber, marketing manager and one of the co-authors of “Brazilian Barbecue & Beyond,” calls “cheesy dough balls” — because it’s easier to say than pao de queijo (PAWN-dee-kay-zhew).

Wait! Chimichurri? Isn’t that the national steak sauce of Argentina? Blame the cross-cultural confusion on the cultural melting pot that is modern Brazil: Yes, the parsley-heavy chimichurri — an Argentinian creation — has become the No. 1 sauce at Brazilian-style steakhouses, Barber says.

In a vast country where there are many regional cuisines but no tradition of haute cuisine, home cooking is the status quo. That also means every cook has his or her own version of a recipe — “no carbon copy recipes exist” — and the country’s immigrant roots are reflected in its dishes, such as the popular stroganoff, originally from Russia.

“Brazilian Barbecue & Beyond” aims to “replicate the flavor and vibrancy” of Brazilian food in London without copying it, Barber says during a recent phone interview. That approach makes the book’s 80 recipes both appealing and adaptable.

I’ve been married to a Brazilian for 29 years, and for nearly as many years the signature cocktail at Casa Silva has been the lime-and-sugar-muddled caipirinha. When we have friends over for a barbecue, my husband grills churrascaria-style meats. He also makes huge pots of the pork and black bean stew known as feijoada every August (which reminds me, I will be chopping 10-pound bags of onions very soon).

I have always been a helpful spectator and an enthusiastic and knowledgeable eater, but I’ve never really taken control of the menu. A few weeks ago, I grabbed the colorful “Cabana” cookbook (it has a different name and cover in the U.K.) that had been on my bookshelf since 2014 and began thumbing through it, searching for recipes that would work nicely when hosting a Rio-themed Olympics watch party.

In addition to traditional skewers of meat, I wound up making my first batch of coxinhas, a snacky chicken croquette shaped like a drumstick that is typically served at botecos and barzinhos, literally “little bar.” (The Brazilians add “-inho” to practically everything to show affection.) The coxinhas were, if I may brag, among the best I’ve ever had. Bonus: I got over my fear of deep-frying.

My non-Brazilian girlfriend, who has been partying Brazilian-style with our family for nearly three decades, is so smitten with Brazilian food that she made learning how to make the cheesy bread a New Year’s resolution.

Inspired by her success — I taste tested for quality assurance — I wanted to learn to make them myself. She found a ridiculously simple version on simplyrecipes.com and she remains the official head pao de queijo maker of our party group, but when I get a craving, it’s good to know I can make my own.

I also made my own caipirinha, and I tested a sangria with a slug of cachaca at a recent potluck. Let’s get this Rio party started!

— Brazil is spelled Brasil in Portuguese. Brazilians speak Portuguese, not Spanish. They are Latinos but not Hispanic.

— The country is larger in land mass than the contiguous United States.

— The capital of Brazil is Brasilia.

— Brazil is a melting pot, with African slavery and subsequent immigrant groups from around the world shaping its cuisine in ways that are similar to the southern United States. Pork is an important meat, and collard greens are a staple. There is no Mexican influence, tortillas or spicy peppers, other than the malagueta pepper table sauce.

— Brazil’s largest immigrant population is the Japanese; it is home to the largest population outside of Japan.

— The national dish is feijoada, a black bean and pork stew created by African slaves and typically served in homes on Saturdays.

— The national cocktail is the caipirinha, a potent, rum-based cocktail.

— Churrasco, or Brazilian barbecue, is rubbed with rock salt and cooked over high heat.

Coxinhas (koh-SHEEN-yahs) are a popular Brazilian bar snack that resembles a tear-shaped croquette.

I adapted this recipe from “Brazilian Barbecue & Beyond” by London-based authors David Ponte, Jamie Barber (owners of Cabana restaurant) and Lizzy Barber. Rotisserie chicken makes a quicker and more flavorful base than shredded poached chicken.

Brazilian food is not particularly known for spiciness, although malagueta peppers are sometimes offered as a condiment. When I couldn’t easily find malagueta peppers at the grocery store, I turned to Gourmet Garden’s Chili Pepper Stir-In Paste, available in a resealable tube.

There are about as many ways to shape coxinhas as there are cooks. While all coxinhas are teardrop-shaped, some are large, others small, some have a fatter base, depending on the size of the cook’s hands. I adapted the recipe for bigger rather than smaller bites, but you could make the coxinhas half the size if you have a big crowd.

Hot oil: Use a thermometer and wear appropriate attire. Watch what you are doing; keep children and pets away.

To prepare the marinade paste: Place all ingredients in a small food processor or blender and pulse to make a smooth puree. Transfer to a clean jar, seal and keep refrigerated for up to a week.

To prepare chicken and potatoes: Discard chicken skin. Remove meat from the bone and finely chop. Place chicken in a mixing bowl; set aside.

Fill a 4-quart Dutch oven 3/4 full of water; salt and bring to a boil. Add potatoes and return to a boil, then turn to a simmer for 10 to 15 minutes, until the potatoes are just tender. Drain well, then return the potatoes to the pan and place pot back on turned-off burner to dry over the residual heat.

While the potatoes are cooking, heat the olive oil in a small pan and add the onion, cooking gently over low heat for 8 to 10 minutes, or until translucent. Add the onion and olive oil mixture to the dried potatoes and mash until smooth.

Add 4 tablespoons of the marinade paste to the chicken. Add chopped parsley and stir to combine. Season with salt and pepper, then taste to adjust seasoning. Stir in mashed potatoes.

Set up breading flour, then egg, then panko bread crumbs. With damp hands, shape about 1 cup of the mixture into a drumstick or teardrop shape using the contour of your hands to form a croquette with a rounded base and a pointed top. Lightly flour the coxinha, then dip in eggs to cover, then lightly roll it in panko until evenly covered. Set breaded coxinha upright on a plate and repeat with the rest of the mixture. Cover the plate of coxinhas with plastic wrap and chill in the refrigerator for at least an hour to firm up.

To fry coxinhas: Heat 3 to 4 inches of oil in a deep fryer or a Dutch oven until it registers 325 degrees on a thermometer. Fry coxinha in batches, making sure not to crowd the pot. Cook for 3 to 4 minutes, turning once or twice with a slotted spoon, until golden brown. Carefully remove and drain the coxinhas on paper towels.

Serve warm with additional marinade paste for dipping or sprinkle with Tabasco or other hot sauce.

Cachaca is a Brazilian-style rum that is available at large liquor stores. It is the key element of the caipirinha, a refreshing cocktail made with lime and sugar.

Open the chicken thighs and place them on a cutting board. Cover them with plastic wrap and lightly bash them with a meat mallet or rolling pin until the meat is of even thickness. Place meat in a zip-close bag. Add garlic, oregano, cachaca, olive oil, salt and pepper. Use your hands to toss and coat the chicken, working the marinade evenly into the flesh, then place in the refrigerator for at least 4 hours.

Remove the chicken from the refrigerator 30 minute before cooking and let come to room temperature. Light the grill and let the flames die down. Thread the chicken on metal skewers and grill for 3 to 5 minutes on each side. Let the thighs rest for 5 minutes before sprinkling with parsley. Serve with lime wedges on the side.

Pao de quejo — literally translated from Portuguese as “bread of cheese” — is a delectable cheesy puff that gets its chewiness from tapioca (sometimes called cassava or manioc) flour. This Simply Recipes version whips the batter up in a blender. The batter can be made in advance and kept in the refrigerator up to 2 days. Be sure you have mini-muffin pans on hand.

1 egg, preferably at room temperature or warmed in hot water

Put all the ingredients into a blender and pulse until smooth, using a spatula to scrape down the sides of the blender. You can store the prepared batter in the refrigerator for up to 2 days.

Pour batter into prepared mini-muffin tins, not quite to the top; leave about an 1/8 inch from the top.

Bake tins in the oven for 15-20 minutes, until all puffy and just lightly browned. Remove from the oven and let cool on a rack for a few minutes. Cheese bread is best served warm.

Caipirinha cocktails are best made one at a time. If you would like to serve a pitcher drink from “Brazilian Barbecue & Beyond,” try this fruity two-tone sangria, originally named Rio 2014, in honor of the World Cup.

A small handful of mint leaves

Fill a pitcher with ice cubes, then add cachaca, orange and lemon juices and simple syrup. Give the mixture a stir, then pour in the red wine. If you like, pour the red wine over the back of a tablespoon to create distinct layers within the pitcher. Garnish with orange and lemon slices and mint. Stir immediately and stir before pouring, too.

Cachaca is the prime ingredient in caipirinhas, Brazil’s national cocktail.

Cachaca is an unaged sugarcane rum, and it is consider a drink of the people. The most popular cachaca name brands are the relatively inexpensive 51 or Velho Barreiro, and both are perfectly acceptable for a party.

In recent years, premium brands of sipping cachacas with artisanal pedigrees have entered the market, including Leblon and Novo Fogo. At my house, we are fans of Novo Fogo. We are on trend: Fogo de Chao uses a private label cachaca from its own distillery.

Cachacas are simple to make, but the process goes much more smoothly if you have a cocktail muddler. Go easy with the passion, though, or you might wind up breaking the glass.

1 tablespoon superfine sugar, or to taste

In a highball glass, place the lime quarters and sugar. Use a muddler to extract the juice from the lime and crush the peel to allow it to release the essential oils. Add cachaca and fill glass with crushed ice. Stir and serve.

This recipe from “Brazilian Barbecue & Beyond” was adapted to use tri-tip beef roast (similar to picanha) instead of lamb, which is actually more typical. I also substituted Gourmet Garden’s Chili Pepper Stir-In Paste for the malagueta peppers.

Put chilies, garlic, mirin, vinegar, salt, cumin, oregano and oil in a small food processor and blend until it forms a smooth, wet paste. (Use immediately for this recipe; keep excess in the refrigerator in a clean, sealed jar for up to a week.)

Place meat cubes into a ziptop bag, add 6 tablespoons of the marinade and let marinate in the refrigerator for 4 hours or overnight.

Light the grill and let the flames die down. Thread skewers alternating with meat and hearts of palm pieces. Season lightly with salt and pepper and cook for 8 to 10 minutes, turning the skewers a few times to brown evenly. (Brazilians prefer their meat rare.) Serve skewers with remaining marinade, if desired.