The People vs. Fritz Bauer proves how one man betrayed his country to save his country 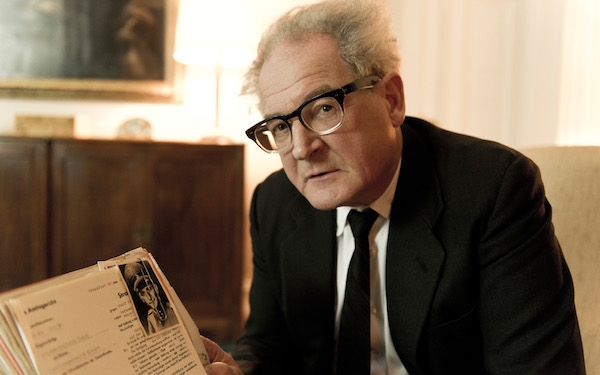 Readers - Save $4.00 per ticket when purchasing tickets to see the film at Laemmle Theaters.  Purchase tickets here! Enter Discount Code: “Frankfurt579” at Check Out!

In the fight between individual and country; emotion and morality; and defiance and patriotism, comes character. The People vs. Fritz Bauer takes that measurement of character and displays it front and center, as its titular subject bares the weight of the collision of the world at large with the one of his own making. The aftermath of the Holocaust may be the loudest component of writer-director Lars Kraume’s drama, but it is how this one man, surrounded by demons without and within, can still manage to make his own history an empowering one where Fritz Bauer takes a stand against similar tales of the tragic war.

Coming into this project, Kraume and his co-author Olivier Guez knew, when thinking about Germany dealing with its dark past, that Attorney General Fritz Bauer (Burghart Klaussner) would be the most engrossing angle of entry for many reasons—maybe even too many reasons, for the later decades of his life were full of harrowing accounts of activism in bringing down the post-Nazi regime. That’s a lot of material to cover, and while a biopic would’ve been possible, they knew their film would lose it sense of urgency and immediacy if it tried to cover all the bases in one fell swoop.

So they chose 1957, over a decade after the war came to an end, yet still a tumultuous time when members of the Nazi Party still controlled much of the German government while a large percentage of the country refused to acknowledge the war at all. Needless to say, that’s a tense sociopolitical climate to find oneself in, and that’s where Bauer comes in.

Rather than shy away from the rather uncomfortable nature of the war’s aftermath, Bauer went straight to the point. Not only a Jew, but a homosexual and exile as well, Bauer returns to Frankfurt with the intention of navigating Germany’s gaze to the future, not by ignoring the past but accepting it as a matter of fuel and necessity. While he has come to many dead ends in his hunt for Nazi leaders around the world, it is when he receives a tip that Adolf Eichmann, the SS officer responsible for the mass transportation of Jews to Auschwitz, was hiding out in Argentina, where his determination is reinvigorated. Of course, just as much as he wants to find Eichmann and thus be led to other leaders of the Reich, there are plenty of people, including those in his own government, who want to prevent Bauer from doing so at any cost. Thus, he has to start making life-risking decisions like committing treason in order to save his own country’s future. And that’s just the beginning.

While he finds himself somewhat of a loner, especially when the world seems to turn against him, it’s in the moments when he lets others in, like young public prosecutor Karl (Ronald Zehrfeld) when he realizes whatever struggle he faces is worth it as long as you stay loyal to your cause and those who also strive for it.

This is the element in which Kraume strikes the deepest chord, allowing the intrapersonal effects shine just as much as those on the wider political stage. Karl and Bauer are of two distinct generations, have different aspects of their life at stake, and yet their sense of duty to this cause, as well as the ghosts that haunt them, remain the same, and the complex bond that forms between them is enough to pull you in.

What’s perhaps most striking is the physicality of the actors that Kraume employs on his screen, where each persona has an intricately engaging quality that goes beyond mere stage presence.

Take Zehrfeld as Karl, for example. A tall, broad-shouldered young man, at a quick glance you’d expect ignorance or impatience towards Bauer and his tireless efforts as he fits the stereotype of a brutish man. But then you look into his eyes and see a tangible pain and insecurity that is both reflective of his personal life and the life of his country that, despite looking all tough and together, refuses to accept what has taken place within its own borders. Zehrfeld becomes the surprising centerpiece of sensitivity in Fritz Bauer and a quality match to Klaussner.

Speaking of the devil, we can’t look past the man who takes on the seemingly impossible task of waking up his own country to responsibility. Klaussner, with an almost theatrical presence, wears the role that Bauer has taken and expresses it through his very own spine. His gait, his cough, the way he turns his head in paranoia, all add to this madness that has in a sense driven himself mad. The fight is breaking him physically and mentally, and Klaussner shows us that with patience and sometimes appropriate fury.

With that push and pull of determination and utter frustration, The People vs. Fritz Bauer does not belittle the fragility nor the endurance of the human spirit. It reminds us, through one true account of one dejected old man, the road laid out before you is oft easier to travel when you reach out to the ones on your side, with only a glance behind to remind you why to keep on trudging.

Save $4.00 per ticket when purchasing tickets to see the film.  Purchase tickets here! Enter Discount Code: “Frankfurt579” at Check Out!