A cult film slithers to life: Ten years later, screenwriter looks back at ‘Snakes on a Plane’ phenom 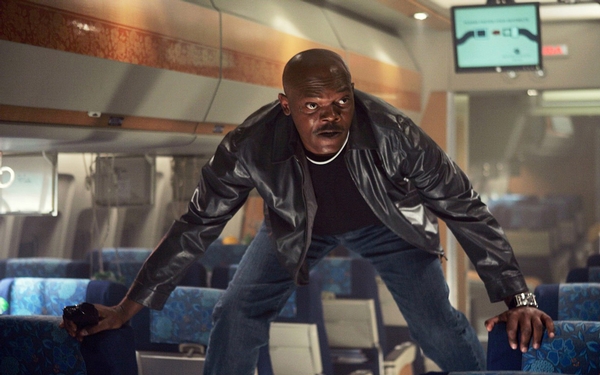 When people ask me about “Snakes on a Plane,” I get two questions. What is Samuel L. Jackson really like? And where did the idea come from?

The answer to the first question is easy. Samuel L. Jackson is the coolest guy in the world. Period.

The second one, though? That one’s a little more complicated. The project was born in 1999, and where most people at the time were worrying if the Y2K computer bug was really going to reset civilization back to the Stone Age, I was concerned with trying to come up with the plot line to the perfect horror movie. I was working as a development assistant at Patchwork Productions, a film production company that had a first-look deal with Dreamworks and shared office space with Cameron Crowe’s company in a small building in a trendy little corner of Santa Monica.

The thing is, I didn’t really want to be an assistant (nobody does) — I wanted to be a screenwriter. The hardest thing about being an aspiring writer, as any aspiring writer will tell you, is trying to get anybody to read your script. Lucky for me, I had a very cool boss in producer Craig Berenson. Craig was willing to read my stuff … although I think it was more to motivate me to keep his lunch meetings running smoothly than because he saw any real writing promise in his assistant.

In any event, I gave him a spec script I had been working on, and after reading it he decided I had something resembling talent. Or at least something he could work with. Craig made some calls, and it wasn’t long before I had agency representation at ICM and dreams of putting my days of answering phones behind me.

But I wasn’t ready to quit my day job quite yet. Craig wanted to do a horror movie, and we started brainstorming. The approach we took was, “What are some of people’s biggest fears?” The two most prevalent that we kept coming back to were the fear of snakes and the fear of flying. And the idea for “Snakes on a Plane” was born.

We hammered out the beats of the movie and took it to the heads of our company, producers Penney Finkelman Cox and Sandra Rabins. Penney and Sandy are veteran producers, very hip and in tune with what studio buyers are looking for. And so their initial reaction to the pitch was more or less what we found to be the standard reaction: They liked it … but they didn’t know quite what to make of it.

It was the same thing we heard at every studio we pitched it to: “What’s the tone of the film? How do we market it? Is it a horror movie? Is it comedy-horror? Is it an action flick with horror elements? We like it … we just don’t get it.” It sounds funny now, 10 years later, where just about everybody on Earth has seen or heard of the movie. There’s snakes. On a plane. That’s the movie. What’s not to get?

Finally, we pitched the idea to an executive who did get it right from the start: Don Granger, who at the time was at Paramount Pictures. Don is a really smart, really instinctive executive, and needless to say, he loved it. He set us up immediately with MTV Films, which had its deal at Paramount, and we were off to the races.

We developed the story, built up the characters, fixed any plot holes, and it was 2001 and we were looking at a studio greenlight … and then the unthinkable happened: Sept. 11. And the last thing that anybody wanted to do was an airplane disaster movie. So the project was put into “turnaround,” a Hollywood euphemism for shelving a script indefinitely.

But like I said, Don’s a smart guy, and even while he was switching jobs from production executive at Paramount to producer at the Mutual Film Co., he kept quietly working on our movie. He secured the turnaround rights from Paramount and took the idea to New Line Cinema, which has always had a reputation for outside-the-box thinking. New Line gave us its ideas, we retooled the script, and pretty soon we were back in business.

The director they had in mind originally was Ronny Yu, a Hong Kong martial arts film director. But when that fell through, the script went to the guy who was clearly meant to make the movie from the beginning: veteran stunt coordinator and action director David R. Ellis. One piece of the puzzle remained, and when he fell into place, so did everything else: Samuel L. Jackson.

Sam loved the idea from the get-go. The rumor is he signed up based on the title alone. A few months later, we were in production. I cannot express in words what it felt like walking onto the set the first time. To see your imagination made real, live and in color down to the smallest detail.

The set was constructed from two decommissioned 747s cut in half and reassembled atop the world’s largest hydraulic gimbal. You could stand in the cabin and the whole thing would swivel and shake and dive — the closest one could possibly get to being inside a crashing plane and surviving the experience. I even got a small role in front of the camera — David let me play the part of the bomb-sniffing dog handler. But it was when production wrapped that things really started getting exciting.

I think it had mainly to do with the title. It was so simple, so unvarnished, so unapologetically sui generis. Just those four words: snakes on a plane. Again, you got it or you didn’t. And people definitely got it. Something about the idea of a movie like this from a major studio with a major star sparked something in the collective cultural consciousness and took off running.

By summer 2006, the movie had a gigantic buzz, months before its release. There were T-shirts and memes and videos and Web parodies; there was even a fan site, Snakes on a Blog, that devoted itself to documenting every detail of the making of the movie and the events surrounding it. Not a day went by for three months that the film wasn’t mentioned on one talk show or another. “Snakes on a Plane” became not just a title but also a phrase, with its own entry in the online Urban Dictionary.

And then, of course, there was that line, that epic, profanity-laden epic quote that became the distilled representation of the entire movement. You know the one.

But the ultimate indicator was Comic-Con. If there exists a litmus test nowadays of pop culture awareness, it is administered every July at Comic-Con International in San Diego. The promotional event that New Line put together at Hall H at the Convention Center was the most packed I had ever seen, with crowds of fans crashing the gates and overwhelming security staff just to catch a glimpse of the trailer — and this was for a movie that didn’t even have any superheroes in it. Peak buzz had most definitely been reached.

The movie’s theatrical release was the culmination of a project seven years in the making. And for me personally, as a writer, an artist, a film buff and ultimately, as a guy who has never wanted to do anything other than work in Hollywood and make movies, seeing the movie I had written premiere at Grauman’s Chinese was pure wish fulfillment.

But show business is, at the end of the day, a business, and box office expectations were high — maybe a little too high. Despite the film opening in first place on screens worldwide, and despite its respectable $15 million opening weekend, there was a feeling by some that the numbers should have been higher. Looking back on it now, whatever disappointments may have been felt at the time were unrealistic. The movie had cost only $30 million to produce — and made $62 million worldwide; it was never meant to be a record-setting blockbuster.

The studio made a healthy amount of money on the picture and continues to do so, as evidenced by my quarterly residuals checks. More surprising was that the reviews were on the whole much more favorable than I had expected — sure, there were still a fair number of upturned noses, but when Manohla Dargis of the New York Times doesn’t hate all over your little horror flick? Let’s just say the overall feeling was that most of the critics were laughing with us and not at us.

And now, 10 years later, the love for the movie goes on. And its legacy endures, with studio marketing departments using the viral spread of awareness that our movie generated as a template for promoting their own new projects. Turn on the TV and see the programming slates for the growing number of ever-more-ubiquitous cable channels: “Sharknado,” “Lavalantula,” “Piranhaconda” … it’s fair to say that these movies wouldn’t exist without “Snakes on a Plane.” The film created its own B-movie mash-up subgenre.

I’ve worked on a lot of other projects, but none as immediately recognizable as “Snakes on a Plane.” The cultural cachet of being associated with the film continues to pay dividends professionally. I’ve been able to work in media I had no experience in previously, been given opportunities like writing for video game publishers and creating a graphic novel series because of the cultural touchstone of that movie.

One of my current jobs is a digital comic book series for Michael Bay’s 451 Media. His company’s financial partners are a group of Chinese animators and toy producers — and they love “Snakes on a Plane.” It’s a great title to have on your resume. Because it is, was and always will be a cult classic.