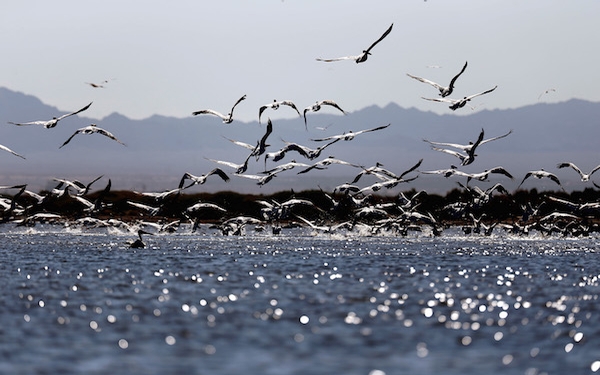 The Salton Sea is in big trouble and plodding California officials are to blame, local authorities and environmentalists say.

The California Legislature appropriated money to start designing projects to restore wildlife habitat and control dust at the steadily receding salt lake in 2010.

But lawmakers did not approve funding to actually begin construction on those conservation efforts until June of this year, when they included $80.5 million in the state budget for a few modest habitat projects scheduled for sometime next year, state officials said. Those projects comprise the first phase of a proposed long-term Salton Sea restoration effort estimated to cost about $3 billion.

In the meantime, critics say, record-high salinity levels, die-offs of perch-like fish called tilapia, fewer birds and a “bathtub ring” of dusty playas stand as ecological emblems of what has not been accomplished.

“The state has been dallying,” said Timothy Bradley, a professor of ecology and director of the University of California, Irvine’s Salton Sea Initiative. “And it would be unconscionable if it does not now shift into a very high speed to get something done.”

Gazing at a squadron of brown pelicans gliding over the lake’s hyper-saline waters, Valerie Simon, Salton Sea program manager at the U.S. Bureau of Reclamation, offered a similar view. “If I was queen for a day,” she said, “I’d make restoring this once magical place a top priority.”

The Salton Sea was created in 1905, when the Colorado River broke through a silt-laden canal and roared unimpeded for two years into a basin near Brawley known as the Salton Sink. It grew into a 360-square-mile lake straddling Riverside and Imperial counties, about 150 miles south of Los Angeles. Fishermen flocked to its shores, and the lake and the surrounding area became habitat for more than 400 species of birds — half the entire number of species to be found nationwide.

Disputes with the state over the Salton Sea’s deteriorating environmental conditions began in 2003, when the Legislature promised to slow the shrinking of the lake. The promise was made as part of a successful effort to persuade the Imperial Irrigation District to sell some of its water to San Diego.

Under the 2003 agreement, the district is required to send water into the sea until the end of 2017. Critics say that with the exception of three small habitat projects scheduled for construction next year, the state has failed to follow through on its promise.

California officials acknowledge that state conservation measures are behind schedule, but say permitting requirements, complex federal environmental protection laws, and haggling over engineering, contracts and funding are to blame for the delays.

“This work should have started years ago, so it’s not unreasonable for people to be nervous,” said Bruce Wilcox, who Democratic Gov. Jerry Brown appointed in 2015 as assistant secretary for Salton Sea policy at the California Natural Resources Agency to expedite restoration efforts. “But we are now moving forward as fast as we can on restoration projects because they are critical.”

Those projects include a $3.5 million plan to restore 420 acres of Red Hill Bay on the southeastern shore of the Salton Sea, and a $30 million proposal to create a nearby network of estuaries to compensate for some of the fish and wildlife habitat that is being lost as the Salton Sea recedes and becomes more salty.

“Of course, we’ll need more funding to finish the rest of the program,” Wilcox said.

Over the last five years, expanses of dry lake bed 2 miles wide have replaced shoreline where fishing enthusiasts once caught croaker, corvina and sargo. Today, the only fish in the Salton Sea are inch-long desert pupfish and tilapia, a tropical species that has somehow managed to adjust to salinity levels that should be lethal.

In some places, the receding waterline has uncovered thermal fields studded with boiling mud pots spewing clouds of steam and sulfur dioxide gas that smells like rotten eggs.

A thin sheet of water on the east side of the sea’s Mullet Island recently evaporated, allowing coyotes and raccoons to raid the breeding grounds of tens of thousands of cormorants, pelicans and herons.

Chris Shoneman, manager at the Sonny Bono National Wildlife Refuge Complex at the southern end of the 35-mile-long lake, gunned the engine of his flat-bottomed airboat on a recent weekday and skimmed along the waterline, taking stock of bird populations that he said were “unusually small.”

He attributed the dearth of birds to a die-off of tilapia this year. After the die-off, he said, “grebes started washing up on shore. Necropsies determined that they had died of starvation.”

“The thousands of Caspian terns and Western grebes we normally get around this time of year,” he added, “are no where to be seen.”

“The state’s own scary predictions of more than a decade ago have come to pass — but its conservation projects are still not up and running,” said Michael Cohen, co-author of a 2014 Pacific Institute report titled “Hazard’s Toll: The Costs of Inaction at the Salton Sea.” “Our patience with the state is largely evaporated.”

Antonio Ortega, spokesman for the Imperial Irrigation District, would not argue with any of that.

“By failing to make serious investments,” he said, “or even starting construction on its restoration projects, the state is sending out a risky message: ‘Maybe the threat isn’t as bad as we thought it was.’”