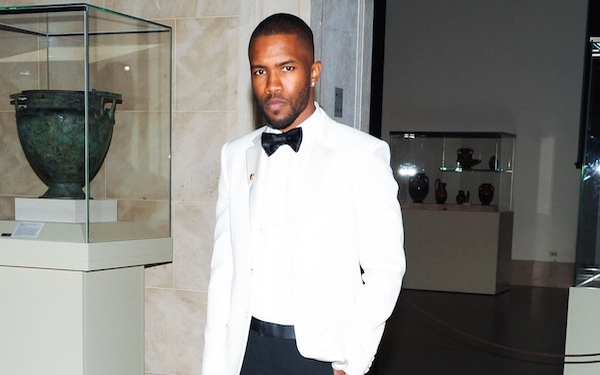 So much about Frank Ocean’s gripping new album, “Blonde,” seems to put it in line with recent high-profile records by Beyonce, Rihanna and Kanye West, from its short-notice release to its limited availability to its expansive roster of collaborators.

Push beyond the branding strategy, though, and actually listen to “Blonde” — which appeared in physical form Saturday at pop-up shops in four cities and can now be streamed or downloaded only through iTunes and Apple Music — and you quickly realize how different the R&B singer’s project is from “Lemonade,” “Anti” and “The Life of Pablo.”

Where those earlier albums seemed to take in as much of pop music as possible — to use every sound and texture at the disposal of today’s Internet-equipped creator — “Blonde” is rigorously contained, almost ascetic in its clean-lined minimalism. One song is even called “Self Control.”

Many of the 17 tracks feature Ocean’s sturdy but yearning voice over acoustic or undistorted electric guitar; others add keyboards, strings or programmed beats but avoid the layered density that defines virtually everything on the radio — and that’s despite a crowded credits list that includes Beyonce, West, Kendrick Lamar, Rick Rubin, Jonny Greenwood of Radiohead and the Beatles (from whom Ocean borrows a bit of “Here, There and Everywhere” at the end of his “White Ferrari”).

Feverishly anticipated since Ocean’s Grammy-winning “Channel Orange” made him a star in 2012, this surprising effort answers breathless hype not with shouts but with one long exhalation.

Which doesn’t mean that what Ocean has to say is perfectly straightforward. Unlike his A-list peers, he doesn’t seem interested here in statement-making along the lines of Beyonce’s “Formation,” where she’s slamming down ideas about feminism and black America as furiously (and stylishly) as anyone since Nina Simone.

Throughout “Blonde” Ocean sings about the pain of disappointment — of being let down by a potential romantic partner (“Good Guy”) or the longed-for experience of celebrity (“Nikes”). He spends plenty of time too sketching (or maybe reimagining) epi-sodes from his past, as in “Pink + White,” which contains these hauntingly gorgeous lines:

In the wake of a hurricane

Dark skin of a summer shade

Nose dive in the flood lines

A resident of New Orleans who moved to Los Angeles after Hurricane Katrina, Ocean seems to be recalling that fraught period of his life.

But the rest of the song resists clear interpretation, as does most of the material on “Blonde.” (Tellingly, the album’s title is even spelled differently depending where you look.)

This isn’t messiness or laziness on the singer’s part. “Channel Orange” showcased his formal innovation and an all-too-rare R&B voice singing about same-sex love.

But Ocean’s debut also reflected his old-fashioned belief in the value of committed work; it’s laced with worry about the trouble that can find idle hands.

And what else is there to draw from “Endless” — a new short film with music, posted Friday online, in which Ocean is shown painstakingly building a wooden staircase — than that this guy sweats the details like few others?

You can imagine the frustration he must’ve felt as chatter accumulated that he couldn’t be bothered to finish his album, when in reality he was merely taking the time he felt necessary to get it right.

As he sings (in more vivid language) at one point in “Endless”: “I never let a random (person) shoot the B-roll.”

So what are we to make of these opposing impulses, this disarming blend of sonic clarity and lyrical ambiguity?

Early on “Blonde,” in the woozy “Nikes,” Ocean sings about identifying with the late Trayvon Martin because he “look just like me,” and that invocation feels significant beyond its obvious emotional weight.

It suggests that Ocean is getting at the contradictions of an era in which guilt and innocence keep blurring, when even the hardest-seeming evidence can lead to an incomprehensible outcome.

He wants you to listen, then to wonder if that’s enough to understand.