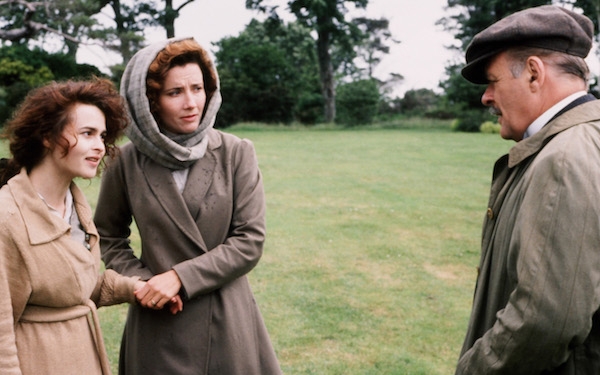 I have a confession to make. Walking into the theater to see the beautiful 4K restoration of Merchant Ivory Productions classic Howards End, I was less than enthused. I thought I had seen the heritage film years before and enjoyed it, though this time around I just didn’t seem to be in the mood for a 2.5-hour film about British social dynamics in the early 1900s. Well, go ahead and call me a fool, because as it turns out, I had been expecting Remains of the Day, another MIP period piece also starring Anthony Hopkins, and had actually never even seen Howards End. Boy, was I in for an unexpected and delightful treat, because despite almost reaching its 25th birthday, Howards End still boasts a genuinely refreshing and buoyant energy that leaves little surprise as to why so many hold this film in such dear regards.

Since the formation of their iconic production company back in 1961, director James Ivory and producer Ismail Merchant have managed to carve out a particular aesthetic and point of view via 44 films they have churned out during their profoundly successful careers. Starting out with the simple idea of producing movies in India for a wider international audience, the duo had little idea that their work would eventually inspire their own genre, aptly referred to as “Merchant-Ivory films.” These kinds of movies would, in some fashion, tap into English life in the early 20th century where social hierarchies and the often-absurd personalities that come with them are paraded by prominent British actors of the time.

The mid 80s to early 90s marked a particular heyday for MIP, which brings us back to Howards End released in 1992, and is unquestionably one of the most successful films of their reign.

Based on E.M. Forster’s classic novel of the same name, Howards Ends tells the story of three unique families and how they become irrevocably tangled up in each other’s lives despite varying states of social status.

Helen (Helena Bonham Carter) and Margaret Schlegel (Emma Thompson) are two outspoken sisters who represent the new and still small progressive women’s movement in England.  Though they are not of low-class, they certainly don’t abide by traditional social norms, and it is when Margaret finds a new friend in the matriarch of an upper crust family, Ruth Wilcox (Vanessa Redgrave), when things get messy.

Forming an unexpectedly tight bond, it is a shock to everyone when Ruth dies and, in a hastily written will, names Margaret as the new proprietor of Howards End, the beautiful country home that the Wilcox family cherishes. Refusing to believe Ruth would bequeath such a prized real estate to a near stranger, the Wilcox’s destroy the evidence of the will and pretend it never happened, and of course, promise to keep its contents a secret from Margaret.

That secret may be easily kept if the Schlegel sisters and the Wilcox’s can keep away from one another, but of course, it’s never that easy. Soon, the head of the household Henry Wilcox (Anthony Hopkins) begins to fancy Margaret as a suitable new wife. Not only does his snobbish family wholly disapprove of such a match, so does Helen who abhors Henry for not being sympathetic to her friends of lower stature.

The beauty of both Forster’s novel and of screenwriter Ruth Prawer Jhabvala’s adaptation is the constant seamless flux of tragedy with absurdist comedy. For a film over 140 minutes long, it takes special talents on the writing front to keep the audience engaged through and through.  Luckily, all of Howards Ends’ characters suffer from some degree of inane narcissism that causes some rather unfortunate things to happen, and Jhablava—who wrote over 23 of MIP’s scripts—does a remarkable job retaining the spirit of Forster’s novel while enhancing the dialogue with even more energy and fervor so that those minutes fly by.

It’s extremely hard to imagine any film starring Carter, Thompson, Hopkins, or Redgrave falling flat, but the spirit of Howards Ends, comes from the culmination of all of its elements—the cinematography and costume design, for example—which are equally matched in passion and execution. To be sure, it still remains one of the best films on all these actors’ resumes, namely Carter and Thompson who thrive on Jhabvala’s dialogue.

Thanks to Ivory’s precise direction, all of that power was given equal weight and measure, allowing Howards End to have a unique mark on the film world, especially when it comes to heritage films that can often blur together into one image of a top hat and monocle. Family dynamics, sociopolitical structures, and then the egos that form them all are put on his screen to play out masterfully. And now with the 4k restoration (a fancy way of saying a high-resolution digital version), the images of Howards End become, somehow, even more remarkable, and a perfect opportunity now awaits for old fans or new to try out the beloved summer vacation home for themselves.