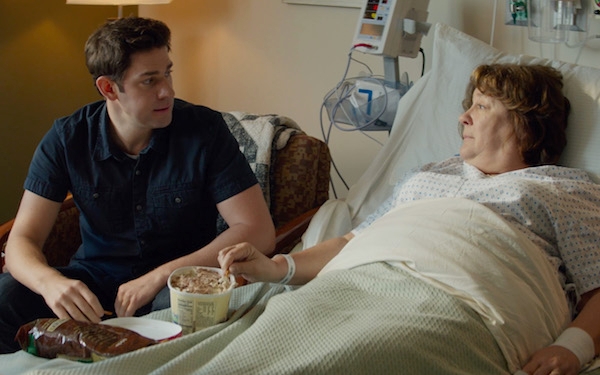 At a quick glance, The Hollars seems to have it all. With a score by songwriter Josh Ritter, directed by and starring everyone’s favorite paper salesman John Krasinski, and featuring basically one of the most likeable casts around, how could this family dramedy go wrong? Well, we all know it takes more than good music and even a rockstar team of actors to drive a film home, and unfortunately, The Hollars car seems to have stalled somewhere in the last county.

Choosing The Hollars as his debut into the world of directing, Krasinski (“The Office”) probably made a pretty safe/smart move. On paper, the story of family facing its dysfunction in the midst of tragedy is simple enough, structurally straightforward, and there’s plenty of inspiration to look for in similar movies in the same genre; however, due to a somewhat languid script by Jim Strouse (Grace is Gone) and perhaps Krasinski nervous to take much risk, the end result is a predictable, albeit occasionally touching, look into love and death within a single household.

The family Strouse’s story focuses on is that of The Hollars, and the exact moment in time is when the mother Sally (Margo Martindale, “Dexter”) is suddenly hospitalized with a brain tumor. In response, her son John (Krasinski), an advertiser by force and artist by choice, leaves his NYC life to come back to his small hometown with little eagerness. There he finds his father Don (Richard Jenkins, Step Brothers) an emotional, bankrupt mess, and his brother Ron (Sharlto Copley, District 9) living in his parents basement and spying on his ex-wife. Having left his very pregnant girlfriend Rebecca (Anna Kendrick) behind, John already has a lot on his mind, and to confront illness and a crumbling familial unit is the last thing he wants, but ultimately becomes exactly what he needs.

As these kinds of stories usually go, The Hollars fluctuates between the world of tragedy and comedy, and finds itself occasionally successful. It’s a tough tone to accomplish, and after recently re-watching one of Jenkins previous and most phenomenal works, the ultimate family dark comedy “Six Feet Under,” if mishandled it can come across kitschy and insincere.

While not insincere, Strouse’s tale is just too familiar with little new to say or at least little to say in a new way. While John seems to have distanced himself from his family over the years, not calling and checking in, it’s somewhat hard to tell why. Yes, his brother is a bit of a loser, and he has a kind-of-weird ex-girlfriend (Elizabeth Winstead) to avoid, but really, as far as dysfunctional families go, The Hollars are all too put together.

There are some special qualities, however, that are definitely worth mentioning, and most of them have to do with Jenkins and Martindale as Mr. and Mrs. Hollar. First of all, as characters, they have the most uniquely crafted relationship in the film, where there is a deep, profound reliance on one another, but as is revealed, may have dollops of regret holding it back. Sally acts like the strong, level-headed one while her husband crumbles underneath the news of her illness, but you can see behind her eyes a fear and deep sadness that is heartbreaking. The bow that Strouse ties at the end of their arc is by far the most satisfying of the film as well. And as actors, well, as always these two remind us why their filmographies are some of the meatiest in the biz, because they never falter in the midst of a light-hearted or a deeply heartrending scene. In fact, they thrive on it.

Krasinski as John, on the other hand, is unfortunately pretty forgettable in the grand scheme of things. As often happens, the main character is the foil for more outlandish personas to act off of, but John leaves a pretty unsatisfying springboard for the rest of his mates. It’s understandable that Krasinski was also directing and had less attention to give to his role, but his mark on that front is also rather muted.

Yet, I still look at The Hollars and I see all these faces that my instincts tell me to love, and even when the story and direction aren’t exactly groundbreaking, the spirit of the people on the screen tell me to hang in and hold on. So I did, and I’m still kind of hanging, but also kind of glad I held on.

THE HOLLARS comes to theaters this Friday, August 26th.